Sun sparkled off the calm surface of Lake Superior as I joined the line of Wisconsin Master Naturalist students waiting to board the Wisconsin DNR’s research boat. With iffy weather forecasts all week, we’d lucked into one of those bluebird days that lulls you into thinking that the greatest lake is not so big after all. 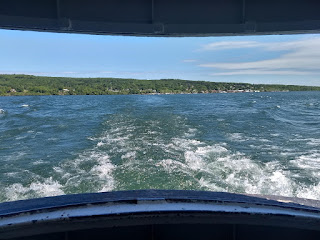 Earlier that morning, Wisconsin DNR fisheries biologist Dray Carl gave us a brief overview of management on Lake Superior. “Have you ever heard that old adage that 90% of fish are in 10% of the water?” he asked. “Well, the numbers may not be exact, but the Apostle Islands do hold some of the most productive waters in Lake Superior.”

The 1,332-foot deep waters of Lake Superior may be impressive, but only a few hardy species can survive in the abyss. In contrast, the relatively shallow water of the 1.28 million acres that Wisconsin manages—just 6.5% of the total area of the world’s largest lake—produce as much harvest as other, bigger jurisdictions. In particular, fish refuges set aside off the shores of Gull Island and Devil’s Island contain important spawning shoals for lake trout.

Within this productive fishery, there are many constituents to consider, and the DNR uses a blend of science and public input to strike a balance. Sport fishermen, commercial fishermen, tribal fisherman, and all of the related business and environmental values of a healthy lake weigh in.

Balance was also needed as our Master Naturalist crew stepped onto the DNR’s research boat, the Hacknoyes. “This is our office all summer!” bragged one of the crew as he showed us around. Soon we’d motored out to where they’d set a gillnet for us the day before. Gillnets are strung out like the net on a tennis court and weighted to the bottom of the lake. Buoys mark each end.  Fish swim in and get tangled.


Captain Ross came down from the bridge and took up a new station next to the mechanical lifter. “Having a mechanical lifter to pull nets up is one of the single biggest things to advance commercial fishing,” Dray explained.

As we watched more than 120 feet of rope rise dripping out of the lake, we could understand why. Captain Ross stood by a window in the side of the boat and steered its course with a little lever by his right leg. While he steered, he also watched the line and eventually the net coming up out of the water to remove debris before it got on the boat. The rope, and then the net, was grabbed, spun, and then released onto a stainless steel table by the lifter.

Dray and Randy, another crew member, coiled the ropes out of the way, and minded the net as it emerged from the depths. Finally, through the open window near Captain Ross, I spotted a whitefish coming up with the net. It spun around the lifter, too, then flopped onto the table where Dray made quick work of extricating it from the net.

After Dray and Randy removed about a dozen whitefish from the net and tossed them into a tank of water, they collected data on the fish. The first two shimmering, white torpedoes were still alive and kicking. Dray measured their lengths and attached numbered plastic tags before tossing them back into the lake. If these fish are re-caught, fishermen return the tag to the DNR to learn more about its travels and age. The other fish had died from the stress of being pulled quickly. Typically, 95% of fish in their research nets survive.

The dead ones offer more information, though. Dray skillfully slit open their heads to clip out the otoliths—their ear bones—which record their age just like rings on a tree. The fish are then field dressed and put on ice, ready to be delivered to the Bodin Fisheries processing plant. Back on shore, we followed those fish to Bodin’s and saw the fillet machine, the skinning machine, the smoker, and the huge coolers where fish are readied for a visit to your dinner plate.

Fish and fish guts not destined for human consumption get taken over to the Hulings Rice Food Center at Northland College, where their carcasses add valuable nitrogen to a high-tech compost bin. Local farmers use the compost to produce even more delicious food near the Apostle Islands. In the Northland College cafeteria, both local fish and local produce fill students’ dinner plates.

Our full day spent near the calm and sparkling Lake Superior only reinforced our feeling that the greatest lake might not be as big as we thought, especially once it’s clear just how tightly everything is connected. 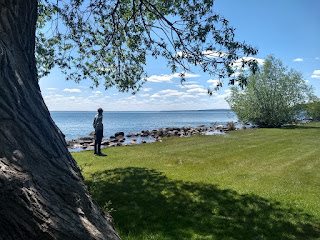