A New Bee in Denali

On one of our few sunny days in early May, I took a scenic drive to Juniper Rock Overlook on the North Country Trail, hoping to find early spring wildflowers starting to bloom. On the way, I parked at a boat landing and crossed the road to explore the haze of yellow brightening a wet ditch.

The oblong catkins of willows may not have showy petals like bloodroot or hepatica, but these flower clusters produce brightly colored pollen and abundant nectar. Most trees that produce catkins depend on wind to spread their genetic material. Aspens, poplars, birches, hazelnut, and alder are some local examples. In contrast, some willows rely on insects for pollination, and early spring insects rely on willows for food before other flowers become abundant. I was pleased to see that several orange-belted bumble bees were foraging on the willows. These queens had survived the winter, emerged from the ground, and were gathering resources to start their colony. 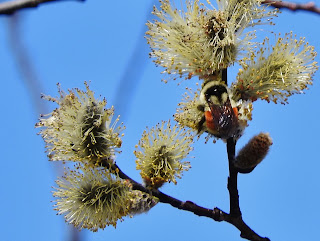 Willow and bees go well together all over the world. Last June I went looking for bees among the 17 species of willows in Denali National Park, Alaska. Having just built the Museum’s 2018 “Bee Amazed” exhibit, I had bees on the brain. So I signed up for the “Insects of Denali” field course run by Alaska Geographic. In contrast to my sunny hike up Juniper Rock, the late June weather in Denali was damp and cold.

One of the instructors, Jessica Rykken, is Denali National Park’s official entomologist. She is charged with surveying, collecting, and archiving insects. Jessica brought our small group of teachers, citizen scientists, and naturalists to a few of the plots her research team, including University of Alaska Fairbanks graduate student Adam Haberksi, set up to study “patterns of arthropod diversity across habitat type and along elevational gradients in Denali National Park.” This work will be the basis of Adam’s Master’s thesis. 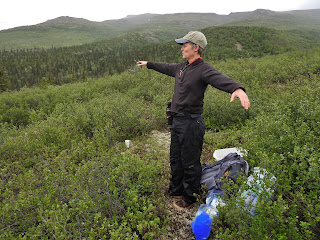 Next to a sophisticated data logger that records the air temperature at regular intervals, each insect plot had a smattering of blue, yellow, and white plastic cups held aloft on wire stands. I often chuckle at the juxtaposition of highly technical and homemade gear that scientists use. The cups were filled with propylene glycol, a syrupy food additive that preserves any insects that meet their demise. 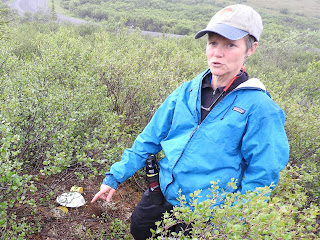 Jessica showed us how to collect insects by pouring the bug soup we found in the traps through little tea strainers. We topped off the cups with more propylene glycol from a jug before placing them back in the stands. The soggy insects were dumped unceremoniously into carefully labeled sample bottles for processing back at the lab. Although the insects looked like little drowned rats, a few of them could be identified as bumble bees based on their large size and furriness. Between Jessica’s work and that of earlier scientists, 17 species of bumble bees have been recorded in Denali National Park. That’s more than one third of the bumble bee species in all of North America! 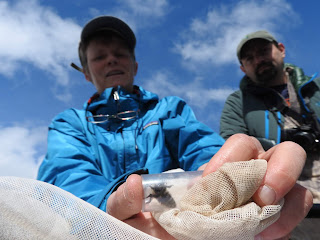 Since the hotbed for bumble bee diversity lies in the rugged terrain of the Himalayas and Alps, it’s no surprise that they can thrive in Alaska (and northern Wisconsin!), too. Their ability to produce heat through shivering, combined with a large body size and a thick coat of hairs to retain that heat, gives bumble bees an adaptive edge in cold places.

Their warm fur looks pretty sad when it’s covered in syrup, though. In order to get her bee specimens looking spiffy (and identifiable) again, Jessica and some graduate students put the bees into Mason jars with warm water and a dab of Dawn dish soap. After about a minute of shaking, the bees are clean and amazingly unharmed. Jessica rinses them, drains off the liquid, and points a regular old hair dryer into the jar to reinstate their natural, fluffy condition.

After a morning on the mountainside in a cold drizzle, our field course might have appreciated the same treatment. Instead, we hiked higher up into the tundra on Primrose Ridge and checked more of Jessica’s insect traps until the sun finally came out. 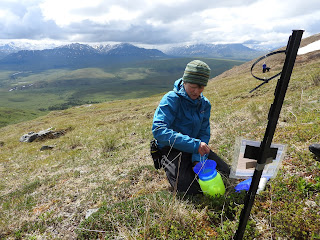 Once the bee specimens are dry, they are pinned into cases and brought to the Museum of the North at the University of Alaska, Fairbanks. Derek Sikes, the Curator of Insects and the other instructor on our field course, gives each specimen a barcode before carefully storing them in state-of-the-art cabinets. While Derek, a beetle specialist, would need a few extra lifetimes to study the collection’s almost 2 million specimens, he often fills requests from other researchers.

Several years ago, Paul Williams, a bumble bee expert at the Natural History Museum in London, noticed that some of the specimens of Bombus neoboreus he was looking at didn’t match up. After sequencing their DNA, Williams put out a request for curators to send him more specimens identified as this black-tailed species of bumble bee. Derek mailed him all of the B. neoboreus from 2012, Jessica’s first summer of research in Denali. 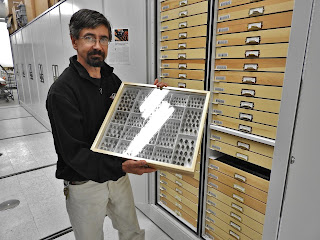 After both DNA work and painstaking morphological measurements, Williams identified three of Jessica’s bees as an entirely new species: Bombus kluanensis. Williams named it after Kluane National Park in Canada, which abuts Alaska and is the only other area where it’s been found so far. The first specimens were collected there in the 1970s, but were also misidentified as B. neoboreus. Before this discovery, it had been almost 90 years since a new species of bumble bee was discovered in North America.

Jessica told us this story on the tundra-covered slopes of Primrose Ridge where she’d collected those three specimens of the new species. 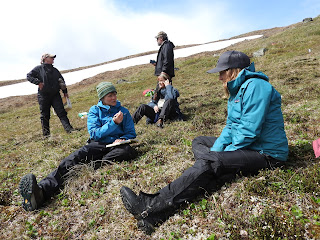 From data loggers to plastic cups, from dish soap and hair dryers to barcoded specimen cabinets, and from DNA sequencing to soggy researchers slogging through willows, I love the way that science can be both fancy and folksy. It reminds me a little of the contrast between the bloodroot’s showy flowers and the modest catkins on willows. Both are important parts of the spring woods. All of these are good for bees.

For 50 years, the Cable Natural History Museum has served to connect you to the Northwoods. Come visit us in Cable, WI! Our new Curiosity Center kids’ exhibit and Pollinator Power annual exhibit are now open!