The Smell of Rain

Throughout the morning, the fluffy white clouds grew larger and more numerous, cluttering up the blue sky. The temperature on the bank sign rose sharply from 40 degrees in early morning, up to 77 degrees by early afternoon.

After lunch, I stepped outside to run errands. A blast of hot, humid air washed over me as I opened the door. We just finished winter with a blizzard, and now it is summer! Then the rain began to fall. I stood under the overhang and watched as huge, splashing, cold drops plunged down through the warm air. Now it not only felt like summer, it smelled like summer.

You have probably smelled it, too: that sharp, pleasant, green scent of rain on dry earth. Those same wonderful odors will even rise up from concrete and asphalt. This smell has a fancy name, and also a biological explanation. The name is “petrichor,” which comes from the Greek word for rock (petra), and their word for the fluid that flows in the veins of the gods in Greek mythology (ichor). You are smelling the blood of the gods sprayed up from the rocks. It is defined as "the distinctive scent which accompanies the first rain after a long warm dry spell."

This wonderful word was coined in 1964, by Isabel Joy Bear and R. G. Thomas, two Australian researchers who discovered that the scent originates from an oil which plants produce during dry spells to retard seed germination and early plant growth. This may be an adaptation plants use to limit competition during times of low moisture. Rain washes the oil away, stimulating germination and growth again. During the dry spells, the oil may also be absorbed into rocks and soils. Falling raindrops liberate the compounds from both plants and rocks, and fling them into the air we breathe.

The rain tapered off, and I walked down the street on my errands. From the bare soil in expectant flower gardens, another scent rose up to meet my nose. This earthy aroma is characteristic of healthy, post-rain soils, and sometimes is even included in perfumes. The name for this scent, “geosmin” also has a Greek origin (combining the words for earth and smell) and a biological explanation.

Geosmin, an organic compound, is produced by several classes of microbes in the soil, including cyanobacteria (blue-green algae) and actinobacteria (especially Streptomyces, which are important to medicine as a source for antibacterial and antifungal agents as well as anticancer drugs). The organisms thrive when the conditions are damp and warm, and create geosmin as a byproduct of living. In an effort to reproduce before they dry out, the bacteria also release geosmin-scented spores. Rain flings these compounds into the air, just as it does with petrichor, and we smell “earth.”

Smelling that wonderful earthy smell is one thing, but tasting it is quite another. Beets, some wines, and bottom feeding fish like catfish and carp all derive their characteristic earthy flavor from geosmin. Some folks like it, and others don’t. Even the water we drink can be tainted with the flavor, though it will not hurt you. Human taste buds are very sensitive to geosmin, and the average person can detect it at a concentration of 0.7 parts per billion. The human nose is even more sensitive, and is able to detect geosmin at concentrations as low as 5 parts per trillion.

In deserts, the presence of geosmin usually indicates water. Camels may follow the scent to an oasis, and then disperse the spores to new places on their travels. Some cacti scent their flowers with geosmin, thereby attracting thirsty insects who are tricked into serving the plant as pollinators. Closer to home, some biologists suspect that petrichor, washed into streams by rain, signals spawning time for freshwater fish.

In Australia, aboriginal people associate geosmin with the first life-giving rains of the wet season, and with the color green. So important is this smell that geosmin perfume, rubbed onto their bodies, serves as a symbolic connection of body and landscape. According to research done at the University of Queensland, “The odor is believed to be protective and cleansing, linking present generations to their ancestors.” 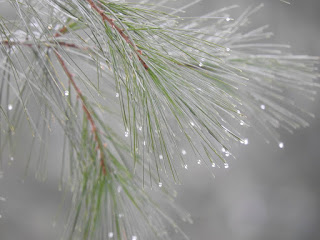 Rain is grace; rain is the sky descending to the earth; without rain, there would be no life. -- John Updike

Soon the clouds thinned and dispersed, the pavement dried, and the sun shone. The smell of summer lingered on the breeze, and lilac buds began bursting with green in their effort to catch up!

This article was originally published in 2013.