Life in the Snow

Lately, the snow has been making me chuckle. Clumps from the first big storm still cling to branches and twigs, but they are slowly slipping off. In the process, the tufts have slumped, curled, dripped, twisted, and oozed into almost organic forms. It’s like looking for shapes in the clouds. I see a sloth, a ghost, an amoeba, snakes, and Silly Putty. The luxurious way that some clumps stretch along a branch reminds me of a cat or a lizard draping itself in the sunshine for a nap. This snow has taken on a personality all its own. 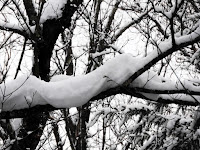 Of course, that’s just my overactive imagination. The snow clumps are simply responding to temperature and wind, and the crystals’ natural metamorphosis as they age. Or are they? Snow is more alive than you may realize.

A recently rebroadcast Radiolab episode on NPR briefly mentioned a scientific discovery that I’d missed. I’ve known for a while that snowflakes and raindrops have a speck of dust at their centers. You see, perfectly clean water won’t freeze until it reaches -40 degrees. Dust particles in the water are needed to act as nucleators that initiate crystal formation in super-cooled water. The dust forces water molecules to assemble in a structure around them. Once a bit of ice with the correct angles has formed, the molecules will continue to crystallize more easily. The crystals can then melt and fall as rain, or grow more ice and fall as snow.

For the past 40 years or so, scientists have known that bacteria can be one type of dust that acts as a nucleator; what they didn’t realize until 2008 was how common bacteria are in snow and rain. A study done at Louisiana State University (Louisianans studying snow!) by Brent C. Christner found DNA-containing cells in snow from all of their 19 study sites. Antarctica had fewer cells, while samples from Montana and France had more.

Some of the bacteria that scientists find in snowflakes attack plants. The bacteria use a protein that mimics the structure of an ice crystal so well that it can hold water molecules together and help them to crystallize more easily. They can quickly turn water into ice, even at warmer (near-freezing) temperatures. When these bacteria spit their proteins onto a blade of grass, the sharp edges of the resulting ice crystals slice open the plant’s cells and spill juicy nutrients into the bacteria’s waiting arms.


On a windy day, though, those bacteria might get scooped up into the upper atmosphere. High above the Earth, the bacteria are cold, dry, and hungry. They need to get back down, but they are too light to fall on their own. Here’s where the ice-nucleating protein comes in handy again. The bacteria galvanize water molecules around them and form snowflakes. Like tiny ballerinas, the flakes float across the sky and dance back down toward the earth. Here they may land on a blade of grass (a new source of food) or melt on my cheeks. Eeww?

Happily, the bacteria that form this “bioprecipitation” are not harmful to humans. In fact, not all of them are even harmful to plants. It seems that some types of bacteria that don’t feed on plants (as well as some fungal spores, pollen and probably other microbes) make the ice-nucleating protein simply because of its usefulness in catalyzing the formation of snowflake taxicabs.

Ski resorts, which also need to form snowflakes, often add dead versions of these microbes to their snowmaking water. The proteins facilitate ice formation at temperatures closer to freezing than just dust, so snow can be made at a wider and warmer range of temperatures.

Of course, this doesn’t just benefit skiers. Scientists hypothesize that by choosing crops that support ice-nucleating bacteria, they could bring more rain to drought-prone areas. The Earth may already have been doing this. Bacteria can be found throughout deep cores of glacial ice, where it was likely deposited with ancient snowflakes. Why wouldn’t plants sustain bacteria that could also bring them rain?

I love the ambiguity that this story embraces. Pathogens that shred living cells are bad, right? But what if those same bacteria facilitate life-giving rain? Nothing in Nature is completely bad or completely good. A wolf-killed deer provides food for ravens and eagles. A beaver’s dam kills flooded trees, but the snags support a rookery of herons. Fungus might hollow out a tree, but it provides raccoons with necessary shelter. During infinite acts of creative destruction our world pulses with energy. It’s a pulse so vibrant that even the snow is alive. 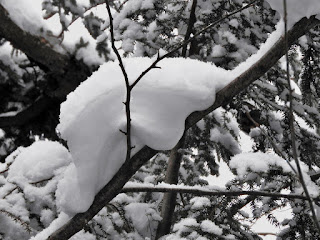