The Call of the Raven

The last bit of rare solstice sunlight glimmered through barren trunks and across unmarked snowdrifts as I clipped into my skis. A few puffs of clouds caught the rays and turned them pink against a gold and lavender sky. The highest boughs of a white pine grove glowed warmly despite the chill, and I glowed warmly, too, as I kicked up the first steep hill. As the sinuous trail swooped through glacial hills and mature forest, my stride became a joyful rhythm. 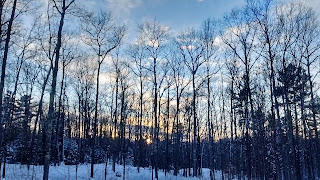 Skiing in the late afternoon generally means I have the trail to myself, which is a lovely side-effect of my schedule. The woods aren’t completely quiet, though, especially to the ears of a naturalist. Hairy woodpeckers and chickadees occasionally give their cheerful calls. Mouse and squirrel tracks speak another language. But my most reliable companions lately have been the ravens. Their bold calls cut easily through the snowy trees, shush of skis, and the dampening warmth of earmuffs.

When people ask about the difference between ravens and crows, I often focus on their voices. Crows generally stick with a scratchy, annoying “caw,” while ravens show off a repertoire of up to thirty types of calls, many of which have a deep, resonant quality that is almost musical. Their basic “gurgling croak” can be heard for more than a mile, but it’s their quiet vocalizations used in social interactions that really show off their versatility as the largest songbird. Ravens raised by humans can learn to mimic our words, and one captive raven even learned to say “nevermore.”

In the wild, ravens mimic other birds and nature sounds. I once encountered a raven that sounded just like dripping water. Since it was near zero that day, the sound of liquid water was quite out of place, but also a beautiful foreshadowing of spring.

Perhaps another reason the ravens’ calls are less grating than crows’ is that they are more often heard alone or in pairs. While crows often congregate in family groups, winter roosting flocks, and floater flocks of juveniles, ravens are more solitary. A mated pair of ravens will defend their territory together year-round and often travel in twos. This is what I’ve been encountering along the trails. On a twelve kilometer loop, though, I typically hear ravens three distinct times. Are they three pairs on three territories? Or do I wind back through the same territory twice?

Or, are they following me?

Ravens do associate with humans to find food, and aren’t above a good rummage through your garbage. They also know to associate gunshots (but not other loud noises like car doors) with hunters and fresh meat. For the same reason, ravens follow wolves as the packs travel, rest, and hunt. They are too smart to follow me.

A raven pair who finds themselves with a bonanza of roadkill in their territory better watch out, though. Once young ravens discover the feast, they bring in reinforcements. In one study, groups of at least nine immature ravens were more likely to overcome the defenses of a territorial pair and gain access to a carcass.

Sometimes on a windless day I’m able to hear the ravens even when they’re not calling. Unlike owls, who need silent flight to hunt for mice, the diet of ravens doesn’t require stealth. Ravens are mainly scavengers, and carrion makes up a big part of their diet. Their wings, then, like the wings of turkey vultures, must be built for soaring in order to discover those carcasses. Both ravens and vultures have distinct silhouettes with “fingery,” slotted wings resulting from the tips of their primary feathers being widely spread.

The slots in between the feathers are narrow passages through which air flows more quickly, like water through a chute. This minimizes wind resistance, reduces drag by a significant amount, and increases lift. While wing slotting is characteristic of birds who soar over land, upland game birds like grouse also use wing slotting for their explosive take-offs. It’s a good way for birds with short, rounded, maneuverable wings to also increase lift. In contrast, birds who soar over the ocean and don’t need maneuverability have long, narrow wings with no slotting.

Maneuverability is key for ravens, and they don’t just use it to avoid trees. Many people have witnessed ravens doing acrobatic rolls, somersaults, and even flying upside down for more than a half-mile. This playful behavior has also earned ravens a reputation as tricksters in many cultures. On the solstice, this darkest day of the year, it also seems appropriate that many stories credit Raven with bringing back the sun. In 2011, local artist Jan Wise painted a series of raven images for the Museum to illustrate a selection of her favorite raven myths. One story from the Original Peoples of the Pacific Northwest ends: “He unfurled his great wings, and took the light back to the people on the other side of the sky.” Maybe these Northwoods ravens will also use their great, black wings to help bring back our light.