Up hills, around corners, and swooping through the woods I went as my skis swooshed beneath me and poles gripped the trail. A pink sunset glimmered wistfully between the trees, and a pair of ravens gave sonorous croaks as they pushed their wings against chilly air. What a joy it was to kick and glide over perfect grooming on the North End Trail’s main 12-kilometer loop.

Earlier, on my first long ski of the season, some parts of the trail felt strangely unfamiliar. Logging operations had altered the scenery by turning patches of dense forest into open woodlands and fields. It was a good reminder that the North End Trails are situated on a working forest owned and managed by Bayfield County.

Just over 4 kilometers in, not far beyond intersection #76 (I put a map at the very bottom of this post), I paused at the top of a long slope to take a breather. More than just a necessary break, this peaceful spot was too pretty to zoom on through. A dense grove of large evergreen trees hugged the trail and seemed to silence the wind. 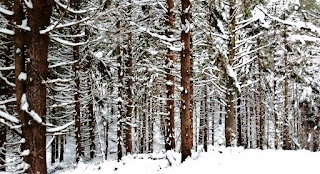 Looking out, a striking pattern of light and dark stretched as far back as I could see. In their own dense shade, the lower branches of these trees were dying, and their bare arms held up bright snow. Looking up, graceful branches arched up to embrace the sky while their deep green fingers dangled like the fringe on a shawl. 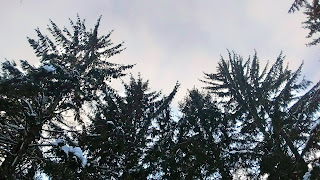 Those pendulous branchlets are the signature form of Norway spruce, Picea abies, and another reminder that this is a working forest. In its native range of Northern, Central, and Eastern Europe (including Norway), this hardy, fast-growing tree is a commercially important source of wood for lumber. It was also used by Stradivarius to make instruments, its cones were once employed as weights in grandfather and cuckoo clocks, and it stands elegantly as the Christmas Tree in Rockefeller Center each winter. European immigrants first planted it in Massachusetts in 1860, but its heyday in the Midwest came later.

The “cutover,” when most of our original forests were logged to build our rapidly growing country, left the land denuded. Hopeful immigrants tried to homestead the land and soon found that the soils were better suited for trees than crops. When the farmers couldn’t manage to pay their property taxes, their lands forfeited back to the county. The federal government purchased some land, and the county kept some, too. On his way out of office in 1933, President Herbert Hoover created both the Nicolet and Chequamegon National Forests. When President Franklin D. Roosevelt swept in with the New Deal in 1933, a new (badly needed) era of conservation began.

The Civilian Conservation Corps (CCC) is a well-known product of the New Deal, whose mark on the land has endured. We still appreciate the log and stone buildings, trails, and bridges that those hardworking boys constructed on all sorts of public lands. Planting trees also formed a huge part of their endeavors. A crew of 200 men might plant 150,000 trees per day, five days per week. Their work was essential to reestablishing forests in Wisconsin and most other Midwestern and Northeastern states as well.

With the goal of stabilizing the damaged soil of abandoned farms as quickly as possible, foresters experimented with having the CCC boys plant non-native species in the hopes that they wouldn’t be susceptible to the insect and disease problems that slow growth in our native species. Scotch pine, Austrian pine, and Norway spruce were all given a try. When I asked Jason Holmes, a Bayfield County Forester, about the success of these foreigners, he admitted that “unforeseen pests weren’t very welcoming to these European tree immigrants. Scotch (or Scots) pine was a classic example of this kind of failure.” But then he added, “I’m sitting here now wondering if Norway spruce is an exception.”

Indeed, it seems to have thrived. When young, Norway spruce can grow up to 3 feet a year. It tolerates shade, drought, and acid soils, and is not a preferred snack for deer, insects, or mice. Squirrels will nibble on the seeds, but those seeds are still Norway spruce’s main route to reproduction, and it has become naturalized in many states.

The calm air I felt while skiing through the Norway spruce grove has been noticed by others, too, and this species is often recommended when planting windbreaks. It’s a common street tree, too. My neighbor growing up in Iowa had a huge one in her backyard. Once I began looking, I found Norway spruce all over the town of Cable.

Out on the trail, though, I didn’t see much Norway spruce regeneration. The mature, almost 80-year-old trees, which currently represent 40 out of about 170,000 acres of the Bayfield County Forest (a whopping 0.024%), will be thinned and harvested according to the same management principals as the white pines growing nearby.  As opposed to aspens, birches, and red maples, Norway spruce doesn’t sprout back after you cut it, so these stands will likely be easy to replant in native species that have come back into favor. 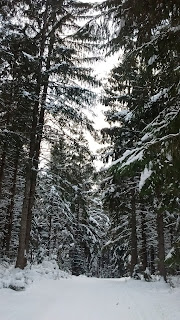 Despite the grove’s calm air, the chill started to seep in and I kicked off down the hill, enjoying the gentle grade of what must be an old logging road. No matter how much I might try to focus on the present—elegant trees, proper technique, keeping warm, and raven’s calls—I’ll still be skiing through history.

If you want to know exactly where I was on the trail, here's the map! The colored rectangle in the background is a stand map from Jason Holmes, the Bayfield Country Forester. The darker red polygons outlined in turquoise are the Norway spruces. You can also see the spruces from the North End Classic Trail. 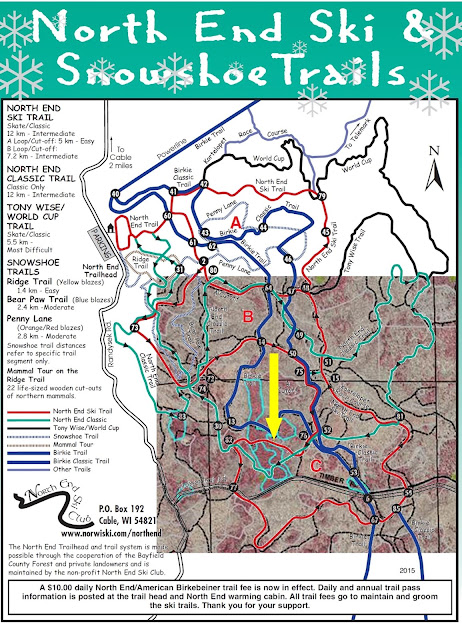