Sturgeon Survey on the Couderay River


As I peered into the deep pool below the bridge through my polarized sunglasses, the four-foot-long, dark gray torpedo slid smoothly above the pale, sandy bottom—and vanished.

This hole on the Couderay River near Radisson, WI, is a favorite hangout for lake sturgeon. Max Wolter, Fisheries Biologist with the Wisconsin Department of Natural Resources (WDNR), knows this because his crew had caught them here before. Still, knowing a fish is there, and catching it, are two very different things.

Evan Sniadajewski and Scott Braden—both Fisheries Technicians with the WDNR—anchored their gear-laden canoe just beyond the shadow of the bridge and began to dabble worm-baited hooks in front of the sturgeons’ noses. From the sandy shoreline where I also stood, Jake McCusker, a college student doing a day of job shadowing, and Dale Crusoe, a Museum member, also tried their luck. In the pre-trip emails, Max had advised Dale: “a good sturgeon rod should have at least 50 lb test, 80-100 lb is even better. Single hooks and heavy weights.”

Sturgeons are bottom feeders. The whisker-like barbels on the underside of their snout are covered with chemoreceptors to help them “smell” food underwater. When those barbels sense food (snails, insects, leeches, crayfish and small clams), the sturgeon thrusts its tubular mouth downward to suck up prey. Any gravel that gets sucked up in the process is expelled through their gills. They weren’t interested in our worms, though. Even when Max stood up in his canoe and directed the anglers to put a baited hook directly in front of a sturgeon’s nose, they weren’t having it. I enjoyed photographing wild cucumber and jewelweed while they tried.


When it became clear that the sturgeons weren’t interested in feeding, the guys switched to a new tactic. Evan and Scott unwound a gillnet—basically a nylon volleyball net on moveable poles—and waded upstream of the pool into waist-deep water. Jake got the humongous landing net out of the canoe. Its diameter was about the same size as the circle my arms would make if I was telling a whopper of a big fish story. Max—still standing in the stern of his canoe—herded a sturgeon out of the pool and toward the gillnet.

The fish rodeo was exciting and quick. Before I could even see a way to help, the guys had stopped the sturgeon’s upstream escape with the gillnet, and Jake had scooped it safely into the landing net. After some excited whoops, we all waded over to Max’s canoe to process our first big catch.

Just like the smallmouth bass that we’d caught farther up on the river (see last week's post), the WDNR has been tagging sturgeons on the Couderay River. Since the Grimh Dam in Radisson was removed in 2011, the Couderay now flows freely into the Chippewa River—where sturgeon populations are healthy enough for harvest. The WDNR is documenting the sturgeons’ natural recovery into one of their historic haunts, now that the fish are no longer cut off by the dam. In Wisconsin, lake sturgeon are a species of “special concern” with regulated harvest, but sturgeons are listed as threatened or endangered in 19 of the 20 states within the fish's original range.

Max waved his hand-held tag reader over the sturgeon’s head, just as he had done to confirm the proper installation of a bass’s tag earlier in the day. The scanner beeped! “Probably the same one we caught here last time!” called Evan from where he was rolling up the gillnet. Max held up the scanner to show me the long number visible on a tiny LCD screen.

Scanning the tag previously injected in the sturgeon. 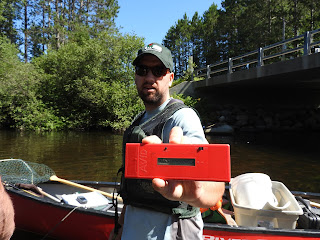 The ID number for our first sturgeon. It was tagged in a previous year and recaptured today.

It took three guys to get the sturgeon out of the net and onto the measuring board. Fifty inches long! Sturgeons aren’t only impressive because of their size, though. I was astonished to feel her skin and find that it was sandpapery—like a shark’s skin. Max also pointed out the smoothly arched dorsal fin—which, when we eventually let her go, cut through the surface of the water just like a mini Jaws. Sturgeons are pretty ancient fish. They evolved just as the dinosaurs blinked out 100 million years ago, and have undergone very little anatomical change since then (although the 29 species of sturgeons worldwide have quickly evolved a wide range of body sizes to fit various niches.)

Max and Dale nerd out about how cool sturgeon are.

Over the course of the day (only 3 river miles long), we captured 6 tagged and 4 untagged sturgeon. All but one of the recaptures were found close to where they’d been caught before, in 2017 or 2018. According to Max, this means that “they are settling into that area pretty nicely and are finding all the things they need (food, suitable habitat, etc.)” One oddball had been originally tagged on the Chippewa River during the 2017 spawning run. Where will it spawn next time?

We caught 5 of those 10 fish in the final stretch of river. The guys really perfected their technique with the nets—which relied on Jake diving chest-deep into the gillnet to make spectacular catches with the landing net. Their techniques worked so well, in fact, that they named the process, using (as science seems to do) the most difficult names to spell: “The McCusker modification to the Sniadajewski method of sturgeon capture.”

I could tell that these guys have a passion for fish and fishing that I’ll never match. Many of their field days include pushing through overgrown creeks under the constant attack of mosquitoes and horseflies. This spectacular day on the river was a real treat—to put their skills in fishing and fish handling to work in a beautiful setting. It’s because of their passion—and the funding you provide through your fishing licenses—that sturgeon (and trout and bass etc.) will only vanish deeper into a pool, and not disappear from our state.

Evan measures a sturgeon and then we get to watch her mouth move.

DON'T WATCH IF YOU DON'T LIKE NEEDLES!
Evan injects a tag into the sturgeon with a large needle.


Evan gets excited about catfish adaptations.

Blooper Roll: Max misses a sturgeon (I wonder if that's why he gave Jake the landing net for the rest of the day? ;-)  )