A Fishy Day on the Couderay River (Part 1)

With blue sky overhead, a clean flowing river all around us, and a refreshing break from summer humidity, it’s no wonder that statements like, “what a beautiful day,” and “it just doesn’t get much better than this,” kept slipping out unbidden. 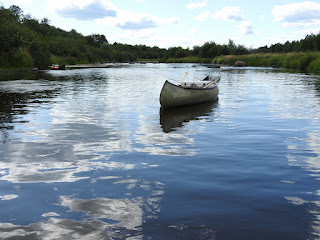 Max Wolter, Fisheries Biologist with the Wisconsin Department of Natural Resources (WDNR), had generously allowed me and a couple of other Museum members to join his crew on a float down the Couderay River near Radisson, WI. I’d named the program “Counting Dinosaurs” in our Calendar of Events. Evan Sniadajewski and Scott Braden—both Fisheries Technicians with the WDNR—paddled one gear-laden canoe. Like fiberglass porcupine quills, fishing poles and nets stuck out from every angle. Max paddled with Jake McCusker, a college student doing a day of job shadowing. 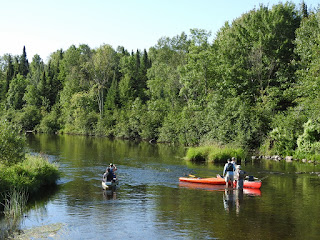 Before we’d even left sight of the boat launch, Max’s crew was reeling in fish. In order to get a better view of their research protocols, we all dropped anchor, and then waded up to Max’s boat. The cool water swirled around our knees as we navigated the patchwork of sand and rocks on the river bottom in our tightly tied old running shoes. 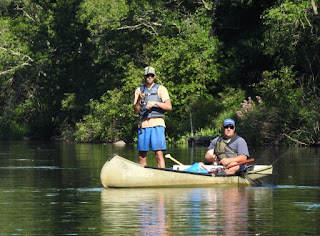 Max had a shorthead redhorse (yes, that’s a fish) already in hand. The diamond pattern of its scales shimmered peach, green, and copper in the sunlight, and its fins glowed a pretty shade of orange. Its mouth was less attractive. As a bottom-feeding member of the sucker family, its fleshy lips were a bit, well, fishy. Even though redhorse aren’t highly sought game fish, they are good indicators of water quality because they can’t tolerate pollution.

I think that this one is a silver redhorse.

The redhorse we caught were merely an exercise in fish ecology and identification, though, and soon found themselves being released without fanfare once we’d admired them. Smallmouth bass, on the other hand, were measured and outfitted with a tiny tag injected into their cheek. The cheek is used because no angler is likely to eat the tag accidentally from that location. Unlike the fancy radio transmitter or GPS unit on a wolf’s collar, these tags are passive. They can only be detected when the fish swims past a tag reader, or a fisheries biologist scans them. Still, recaptures provide important information about where the fish come from, how much they’ve grown, and how long they live.

Mike (a Wisconsin Master Naturalist), Jake and Max measure the length of a smallmouth bass. It has already been tagged, and will be released with the hope of being recaptured in the future. Photo by Emily Stone. 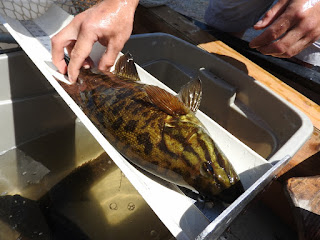 Jake McCusker (left) was job shadowing during this survey on the Couderay. Max gave him quite a bit of practice injecting the research tags into smallmouth bass. Photo by Emily Stone.
fter giving field trip participant and Wisconsin Master Naturalist, Mike Lins, a chance to inject a tag with a giant syringe, Max waved his scanner over the fish just to check. The unit beeped and showed a number on its screen. “This fish will be forever associated with number 1-2-6-0-5 etc. etc. etc.” declared Max. Tag in place, Max quickly clipped off a little bit of the fish’s fin and used a squirt bottle to wash it into a vial. Genetics tests help researchers determine where the fish are coming from and how much different populations are mixing.

Max scans a smallmouth bass that he’s just tagged in order to make sure that everything is working properly. If that fish is recaptured, the DNR will be able to tell where it came from and how much it’s grown. Photo by Emily Stone.

Max and the DNR are interested in tracking the travels of these bass because back in 2011, their home went through a big change. That’s the year that the Grimh Dam in Radisson was removed. Built to provide hydroelectric power in 1928, the 30-foot tall dam had fallen into disrepair. The North Central Power Company decided against rehabilitating it—much to the consternation of many in the local community, who’d enjoyed fishing in the Grimh Flowage.

With the dam removed, though, the Couderay River now flows freely into the Chippewa River. With the dam gone, fish can flow more freely, too. Are the bass moving in from below the old dam, or are they swimming down from upstream, or both? Max’s data will help answer those questions, and help guide management of these important game fish.

Once we’d tagged enough smallmouth bass from that first hole, we floated on down the river, and paused in a deep pool just below a bridge. The guys quickly caught another redhorse—this time it was a greater redhorse, the biggest and least common species. It scales shimmered golden, accented by those brilliant orange fins. “If they have color on the fins, there’s no color in the name,” repeated Max. We’d also caught silver and golden redhorse, whose dorsal fins lack any vibrant hues.

Evan holds up a greater redhorse to show us its colorful fins, while Scott holds the canoe steady. Photo by Emily Stone.

My fish ID skills are growing. Before this summer, I didn’t realize that there was more than one species of redhorse. I was just happy to be able to catch a glimpse of red fins and thus sound semi-knowledgeable as I floated down the Namekagon River.

Greater redhorse are unable to survive in even the slightest polluted waters. The DNR crew was exclaiming about how many they were catching. Could this, too, be a result of the restoration of this river’s freely flowing nature?

While the pool under the bridge wasn’t flowing very fast, it did have the power to capture our attention. We all peered through polarized sunglasses trying to make sense of shifting shadows.

“There, do you see it?” coached Max. Then I did see it: a four-foot-long, dark gray torpedo was gliding smoothly above the pale, sandy bottom. Here was our dinosaur—a living fossil—the main target of our survey. But I’ll tell you more about that next week…