A New Friend in an Old Place

While the guys filleted two northern pike on a paddle blade propped against granite and my mom relaxed in the canoe, I scrambled around collecting firewood. Our makeshift landing on a random shoreline was a bit rough, but in the Boundary Waters Canoe Area Wilderness, the Forest Service requests that you both fillet fish and gather firewood away from any campsite. And anyway, it’s easier to paddle with fillets tucked safely into a repurposed gorp baggie than with fish being tugged along on a stringer creating drag.

It’s also easier to find firewood on some unexplored shoreline than near a campsite where hundreds of visitors have roasted s’mores over crackling flames.

Speaking of crackling flames, a bunch of them once licked the very spot where we now stood. This far eastern shoreline of Saganaga Lake, at the end of the Gunflint Trail and just a few miles from Canada, witnessed forest fires in 1974, 1995, and 2007. The jack pine, birch, and aspen thickets that bristled like porcupine quills over glaciated humps of granite were just 12 years old.

Despite three straight days of rain, this one day of stiff breezes, blue skies, and hot sun had dried out the wood perfectly. Small branches snapped briskly into arm-length pieces I could fit in the bottom of my canoe. I don’t usually carry a saw in the Boundary Waters, because if it’s too big or too green to break easily, it probably won’t burn completely either.

Once my dad had finished cutting the Y-bones out of the pike, I carried the pile of guts into the bushes and buried them under duff and autumn leaves. It used to be common practice to put the fish guts on a rock within view of your campsite and then watch the eagles come in to feast, or to throw pieces up for screaming gulls. That’s frowned upon now, though, since scientists and rangers noticed that greater populations of eagles and gulls were also using loon eggs and chicks as food.

With chores taken care of, we were free to lollygag back to our campsite. The wind had died completely, so we paddled leisurely through silver ripples and the reflections of towering white pines whose island homes had spared them from the fires. Although the sweet whistle of one white-throated sparrow floated out across the lake, the afternoon was quiet in a way that makes you want to be quiet, too. 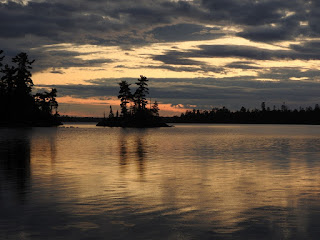 Out of that quiet, a raspy zzzzip emanated from within my canoe. Eyes followed ears, and a splotch of bright green stood out on the pile of pale gray firewood; stood, and then began to climb up through the jumble of wood in a quest for the highest point.

My camera was already slung over my shoulder from taking photos of reflections, so I gently knelt forward in the canoe, reached over the Duluth pack full of discarded rain gear, warm clothes, and lunch, and began snapping photos of the katydid.

While they are often called “long-horned grasshoppers,” that’s accurate only in appearance and not taxonomy. This katydid’s two slender, orange antennae were as long as its body. But katydids are actually more related to crickets, although they are all in the same order—Orthoptera. The bright green of this katydid is typical, and part of their renowned camouflage. His oblong wings, folded over his back like a tent and veined with leaf-like patterns, are another key part. Katydids, especially in the tropics, are famous for looking like leaves.

Of course, on a pile of weathered sticks, that attempt at camouflage backfires. Through my camera, I watched this guy climb deliberately. His feet have four joints. Pads on three of the segments adhere to the smooth surfaces of leaves, while the fourth segment bears a pair of claws used to grasp edges. With super long back legs, bridging large gaps in the sticks seemed no trouble at all.

At one thrilling moment, the katydid vibrated his wings and I watched as he created the dry zzzzip sound that had first alerted me to his presence. While grasshoppers use their legs for stridulation, crickets and katydids scrape the hard edge of one wing against the file-like ridges of the other wing. To hear the calls of their species, katydids have tympana—“ears”—on their front legs, which show up as small dark spots.

As I carried his stick carefully up to the campsite, the katydid burst into flight and landed on the trunk of a young cedar tree. We heard him calling occasionally throughout the evening—trying to attract a mate so that she could lay eggs that would survive the winter.

Back home, with access to iNaturalist’s identification suggestion algorithm, I discovered that this katydid was likely in the genus Scudderia, nicknamed “bush crickets,” who spend their lives in brushy habitats—kind of the like alder shrubs and fire-regrowth where I’d been gathering firewood. I’m not sure I’d ever seen one before.

As is often the case, my canoe trip in a familiar place, filled with the comfortable routines, also included a new acquaintance. Visiting the Boundary Waters just never gets old.

“Joys come from simple and natural things: mists over meadows, sunlight on leaves, the path of the moon over water.”
-- Sigurd F. Olson