Four boats slipped almost silently into inky black water. The river’s mirror-calm surface reflected bright yellows, blues, and reds from our life jackets and warm layers as the current carried us gently around the first corner. Thickets of alders arched their twigs over the water, and matted grass paths tunneled among them. 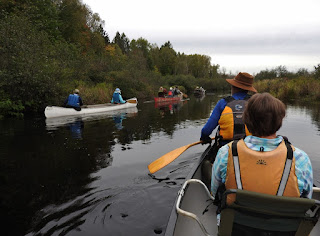 Canoeists slip silently down the West Fork of the Chippewa River. Photo by Emily Stone.

Despite a bright sense of anticipation, we barely spoke—and then in whispers—and tempered every movement with caution against sound. We accepted the liquid music of canoe paddles dripping; the rustle of sleeves; and the breathy imbibing of sweet fall air. 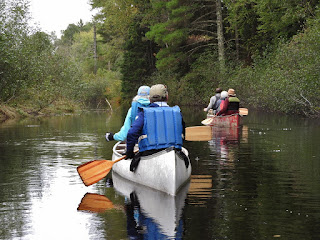 Suddenly, an urgent, high-pitched squeal sliced through the quiet and floated up and over the alders, and out into the forests and wet meadows beyond. Our heads swiveled as if pulled by invisible strings, just in time to see Dan lower the camouflage-patterned tube of an elk bugle back to his lap.

Our paddle had a purpose. We wanted to hear—or see—elk.

Elk in Wisconsin are both a very old, and a pretty new phenomenon. They once roamed through our prairies and oak savannahs, but elk were extirpated from Wisconsin in the 1800s due to over hunting and a rapid decline in habitat. There was an early attempt at reintroduction in 1914, but the last of those animals died in 1954.

In 1995, twenty-five elk were released into the Chequamegon-Nicolet National Forest near Clam Lake. More elk were brought from Kentucky in 2015, 2016, and April of this year. The Wisconsin DNR now estimates that the Clam Lake herd contains over 200 animals, with the long-term population goal being 1,400 elk. A smaller herd has also been established in the Black River State Forest, northeast of La Crosse. 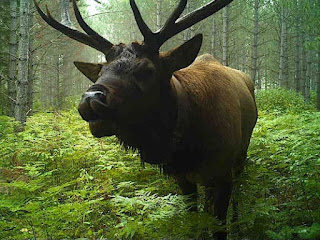 A bull elk is captured by a Snapshot Wisconsin trail cam near Clam Lake.
(Photo: Wisconsin Department of Natural Resources)

Brenda Maier, our guide for the evening, has personal experience with the success of the elk reintroduction. A Wisconsin Master Naturalist and co-owner of True North Guiding & Outfitters, Brenda and her husband, John, often see elk in this area—both in the flesh and in photos. As we gathered in comfy chairs around the fireplace at Boulder Lodge Resort—in a beautifully remodeled log building once part of a logging camp—it was the perfect setting for Brenda and John to regale us with stories of their elk encounters. 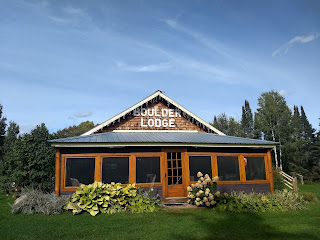 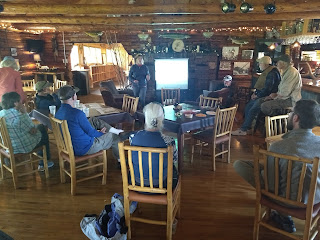 “I was on a game trail heading toward the highway when I looked up,” began Brenda. “Not 30 feet in front of me was a bull elk with the huge, but still-growing bulb antlers of spring.” Her first thought was “this is so cool!” Her second thought was disappointment at not having a camera. And her third thought was “Why is he looking at me like that?”

When she stepped behind a small popple tree, the elk shifted for a better look. When she clapped her hands, he stepped forward again. After Brenda managed to get John’s attention and he brought their bird dogs over, the elk finally moseyed off through the woods.

Brenda and John also host a camera from SnapshotWisconsin—the DNR’s “year-round, statewide effort to engage citizens and students in monitoring wildlife populations through the use of motion-activated trail cameras.” (You don't have to host a camera to help, you can help identify photos from the comfort of your home! Find our more.) From their camera, we know that a bull and a cow elk were very recently hanging out in this neighborhood. She could probably see the hopes and expectations rising in our faces, so Brenda was quick to add, “I have no control over the elk, but we’ll try!”

And try we did. At regular intervals, Brenda played recordings of bull elk bugling and cow elk bleating. Dan offered up his own elk calls. And in between, we listened.

Blue jays screamed their raucous alarms at our intrusion. Flickers—also on their southward journey—made startled “kyeer” noises. Mysterious rustlings emanated from the alder thickets and the dense grasses on the riverbanks. Waving seed heads on a sandbar suddenly erupted into a swirling flock of little brown birds. On a distant hill, the breeze set some dying aspen leaves into a crescendo of motion. 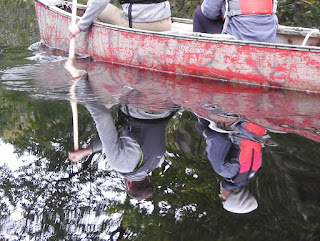 Our elk bugles seemed to rile up wood ducks more than any other critters. They are establishing pair bonds now, and as the pairs took flight, the females’ strident “oo-eek, oo-eek” alarm calls echoed across the marsh. So, too, did the soft honks and wing beats of a pair of trumpeter swans as they rose to the sky to escape us imposters. 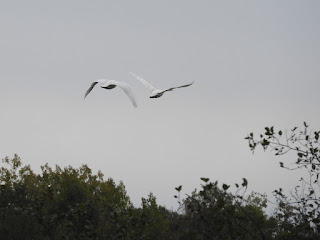 As the already gray day slid closer to darkness, we pulled up on the gravel boat landing and stretched our stiff, cold legs. No elk. And yet, no one was completely disappointed. We were listening for elk, but instead we heard the many heartbeats of their home, which is, in fact, our home, too. 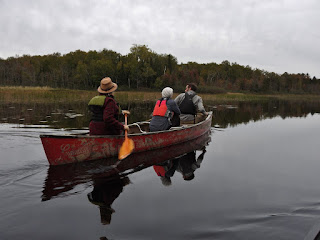