My eyes felt dry and tired after an early morning and a long, windy day spent at The Landing Resort on the Chippewa Flowage. When an orange blur streaked across in front of my car, though, suddenly my eyes were wide open. A fox! 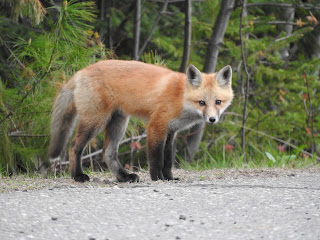 I slowed down and pulled onto the wide, gravel shoulder to see if I could get a better look, but I was fully expecting the fox to melt into the shadows. Instead, it trotted along the opposite shoulder, and then paused on the top of a steep bank that plunged into a dark forest. I dug my camera out of my backpack and started clicking away. The fox’s nose was deep into something delicious lying just over the edge. When I finally looked away from the viewfinder, I discovered that a second fox had joined the first. 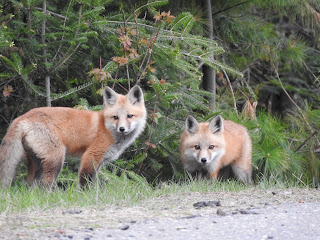 Both were youngsters. Fox kits are generally born in mid-March, so at about two months old, these curious hooligans are almost fully weaned and eating plenty of solid food brought to the rendezvous site by both parents. I guessed that the parents were off in search of said food.

This fox sighting fits well into the bigger picture of animal observations I’ve been making over the past winter. Fox tracks were common on my driveway. While I spotted a lone coyote last fall, I’ve been seeing only wolf sign—and lots of it—since mid-winter. It’s like one of those brain teasers about who is sitting next to whom. Coyotes don’t tolerate foxes. They’ll chase or kill them. Wolves don’t tolerate coyotes, but they generally don’t bother foxes. So when you have plenty of wolves around, they push out the coyotes, and the foxes can thrive.

After tugging and biting at some the snack, one kit lifted its head with a mouthful of fur. Gray squirrel? Cottontail? These are favorite foods for both foxes and coyotes (which is one reason they don’t play well together), but foxes also feed heavily on mice and chipmunks. 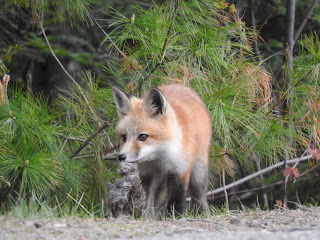 That fox sighting gave me a new spark of energy, so after arriving home, I hopped on my bike for an evening ride in the other direction. When another orange blur zoomed across in front of me and paused for a moment before diving into a culvert, I let out a shout of delight followed by an irrepressible string of baby talk inspired by the kit’s cuteness.

This was a perfect end to a fun day of teaching third grade “kits” from Hayward about the importance of keeping lakes clean and healthy. The Chequamegon Lions’ Water Habitat Day is an annual event, and the reason that I’d spent the day being blasted by wind at The Landing. Dedicated volunteers teach kids about the connections between healthy lakes, fishing, and their own behavior.

Water Habitat Day begins and ends with an all-group gathering, a beautiful Ojibwa song, and a reminder to check for ticks when you get home. That’s good advice for anyone who spends time outdoors. Not many people realize it, but that warning about ticks and my fox sightings are related. Foxes may be part of the solution.

The trouble with deer ticks is that they carry diseases—Lyme, anaplasmosis, babesiosis, ehrlichiosis, and more. Each disease has its own life cycle, and Lyme is currently the most common. Larval ticks—the first life stage that hatches from eggs—don’t carry Lyme disease. They do need a blood meal, though, and may acquire the Lyme bacteria while feeding on their first host. Ninety-percent of the time, ticks pick up the Lyme-causing Borrelia burgdorferi bacteria from mice and chipmunks. If they feed on humans as nymphs or adults, the Lyme may be transmitted to us.

Foxes can interrupt the Lyme bacteria’s cycle by reducing the numbers of mice and chipmunks available for the ticks to feed on. The ticks may find a different host—one who doesn’t carry Lyme—or they may just starve to death. The effect is so powerful that one area of western New York with unusually high numbers of foxes had no reports of Lyme.

A reduction in the number of foxes may actually be linked to the rise of Lyme in recent decades. One study of harvest records found that fox numbers in Minnesota declined by 95 percent from 1991 to 2008, while coyote numbers have increased 2,200 percent since 1982. Wisconsin showed similar trends. The rise of Lyme mirrors the rise of coyotes. Wolf numbers have increased, too, though, and I’m hoping that they’ll bring in an era of more foxes and fewer ticks.

An era where I have more chances to watch adorable fox kits and fewer chances to contract a tick-born disease? That’s a future I’m looking forward to. In the meantime, I made sure to throw both my outdoor clothes and myself in the wash to get rid of any ticks before going to bed. 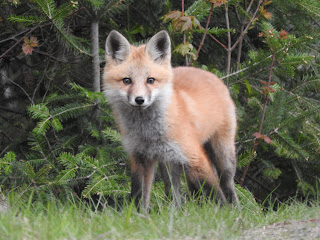 For 50 years, the Cable Natural History Museum has served to connect you to the Northwoods. Come visit us in Cable, WI! Our new Curiosity Center kids’ exhibit and Pollinator Power annual exhibit are now open!