I was surprised to find the brand new parking lot at the St. Peter’s Dome and Morgan Falls trailhead empty on a gorgeous spring morning. Who could pass up this sunshine? Sure, the woods were disappointingly silent because the migrating warblers hadn’t quite made it back, but the hum of mosquitoes was also gloriously absent. 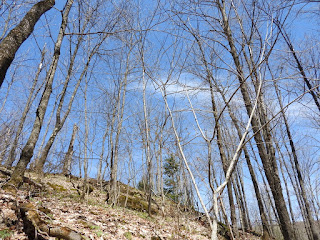 It wasn’t long before I heard the buzz of another kind, though. Low in pitch and low to the ground, whatever it was sounded big. The trail was winding through a little valley on the way to one of several picturesque stream crossings, and wildflowers carpeted the gently rising hills. The sound paused. I paused, too, taking the moment to look more closely at the wildflowers.

Already I’d seen the sunny faces of marsh marigolds along the stream; the tightly furled buds of white trilliums still wrapped in their warm green cloaks; the rounded shrubs of leatherleaf with tiny yellow flowers glowing like Christmas lights; and fairy carpets of spring beauty with their pink-striped petals.


This rich sugar maple-basswood forest is special, and one of the best places to enjoy wildflowers in the Chequamegon-Nicolet National Forest. It’s designated by the Wisconsin DNR as a State Natural Area (SNA), and by the Forest Service as a Research Natural Area (RNA).

Here, maple trees pull nutrients out of the moist soil, and then recycle them right back down in an autumn shower of orange and yellow. Concave slopes concentrate the compost of rotting leaves, and the resulting loamy soil blankets all but the steepest rock outcrops and sandy floodplains. In just a few more weeks, those maples will have sent soil nutrients back to the sky, and their wide green leaves will once again capture every possible photon to fuel their sugar factories.

In the meantime, spring wildflowers grow furiously. With the resources available in the rich, moist soil, and the short window where ample sunshine and warm temperatures overlap, they sprout from energy stored in their roots, flower, attract pollinators, set seed, and replenish their stores before their visible parts dissolve into the shadows.

That will come soon enough. On this bright morning, hot sun burned the back of my neck and the maple buds were still just long-shingled shoots that had expanded but not yet burst. Moss-covered boulders hinted at the shady future, though, and between them this hillside was dotted with handfuls of lacey green leaves. Sprouting out of the center of most clusters was an arching pink stem and a scene fit for my dollhouse days. The small white flowers of Dutchman’s breeches look like puffy little short pants hung out to dry. The waistbands—actually the reflexed petal tips—are an eye-catching yellow. And each pant leg is a nectar spur, filled with energy-rich fluid. 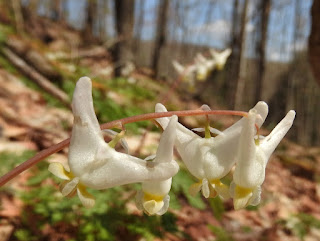 As I admired the Dutchman’s breeches, the buzz came back. I caught a flicker of movement, too, and followed both on a zig-zag route that paused at string of flowers. When the huge bee landed on the arching stem it sank low under her weight.

Through the zoom on my camera, I watched as she grasped one blossom in her front feet, and then used all six legs and one or two additional flowers to gain stability. The flowers bounced and swung with her effort, but still she worked her head up into the yellow waistbands of several flowers before suddenly buzzing away clumsily like a heavily laden aircraft. She only made it as far as the next patch of floral pants. From her large size and the early date, I was confident that this was a newly emerged queen bumble bee out to gather resources for her nascent colony.

Big bees and breeches are made for each other. This queen burrowed first her tongue and then her head into the flower and angled it toward one of the nectar spurs. Throughout this process, the flower’s anthers brush pollen onto her head, thorax, and forelegs. At her next stop, some of that pollen will land on the flower’s pistil. Without this pollination service, the plant’s seeds would not be fertilized.

Smaller bees can’t quite pry open the petals to access the juice bar inside, and they sometimes cheat by chewing a hole in the nectar spurs. While I didn’t spot this in action, I did notice that all but the freshest pantaloons needed mending. Right where the nectar would be stored, little holes had been chewed by some devious nectar thief. Unlike the bumble bee, the chewers offer no pollen courier service in exchange for their lunch.

From flower to flower, I followed that queen as long as I could keep her in view. When she finally buzzed off over the hills, I stood up, stretched my back, and grinned at the world.

This partnership between bee and breeches is not news to me. In fact, I wrote about it back in April of 2016, and that article became a chapter titled “Queens of Spring” in my second book. The reason I skipped giddily up the trail is that I had not yet seen the phenomena for myself. To read a fact is one thing, to have it buzz under your nose and pose for your camera is quite another.

According to the Forest Service, this RNA is a place where “natural processes predominate.” In other words, it’s a place where you can watch nature—and bees--do what they’re supposed to be doing. When do you want to go?

For 50 years, the Cable Natural History Museum has served to connect you to the Northwoods. Come visit us in Cable, WI! Our new Curiosity Center kids’ exhibit is now open, and the Grand Opening is on May 25!