Despite only carrying my camera and a rain jacket, the Lunch Creek Trail was calling my name. I decided to forgo a backpack full of water and snacks and just hike. 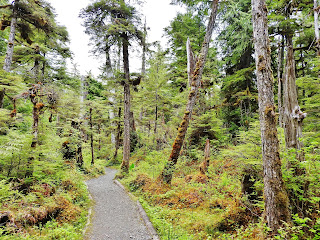 The density of life was stunning. Every tree was covered in moss, covered in the climbing rhizomes of bunchberry, covered in moss, lichen, blueberry, fungi, etc. Every stump had either a little grown of blueberry leaves glowing in the peeking sunlight, or a full-on tree with gnarled roots stilting it up and anchoring it down. 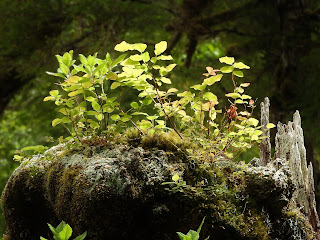 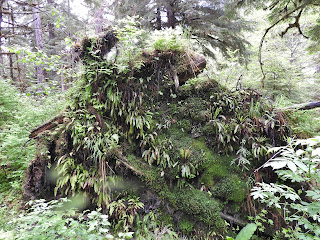 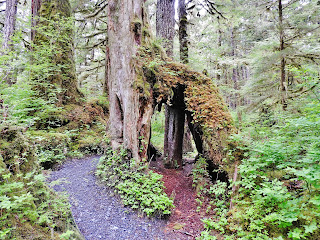 The hike paralleled a river with numerous small waterfalls (the biggest falls were down by the beach.) 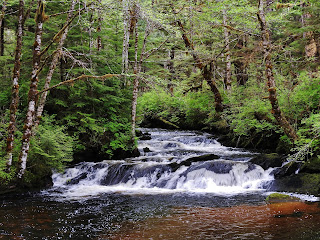 The sound of water rushing and water dripping made me need to pee, of course. As I squatted off to the side of the trail I was tempted—for just a second—to use the large thimbleberry-like leaves for toilet paper. In the Boundary Waters, thimbleberry leaves are prime wilderness toilet paper. Luckily I remember in time that these plants, although having similarly shaped a leaves, are not thimbleberry. Devil’s club isn’t even related to thimbleberry, though, it’s a closer cousin of wild sarsasparilla. And, it bears spiky thorns on its stems and even the ribs of its leaves. Ouch! 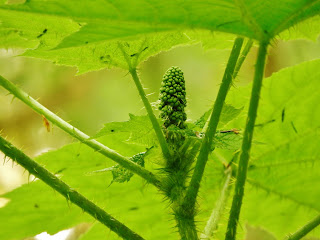 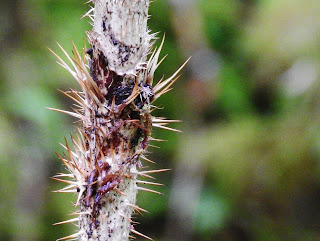 I walked through huge patches of western skunk cabbage. Their crazy spathe and spadix flowers were covered with little Ocellate Rove Beetles mating, pollinating, and feeding. I also spotted two different white banana slugs—a rare color most often seen around Ketchikan (according to Bob Armstrong).  Wikipedia: “The Pacific banana slug is the second-largest species of terrestrial slug in the world, growing up to 25 centimetres (9.8 in) long,[5] and weights of 115 grams (4.1 ounces).” 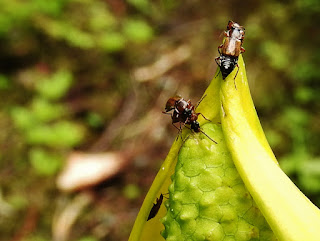 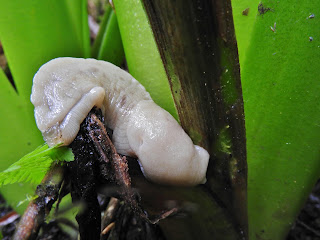 The best part of my hike was when I popped out in to an opening and discovered myself in the middle of a muskeg. So many old friends to greet! So many new friends to identify!

The bright pink flowers of bog laurel were first to catch my eye. 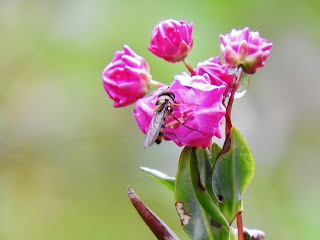 The inrolled leaves of Labrador tea were unmistakable, although smaller than at home. 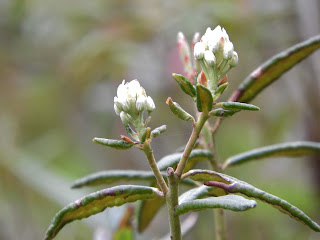 The frilly flowers of deer cabbage (a new one for me) were covered with the same Ocellate Rove Beetles and also a bee-mimicking fly. I did not see any actual bees doing the pollination up here, but this pair of beetle and fly seemed to be everywhere. This flower is in the family Menyanthaceae, related to Bog Buckbean I’ve seen in Wisconsin. It also grows in Japan, as does bog buckbean, which I did not see here. 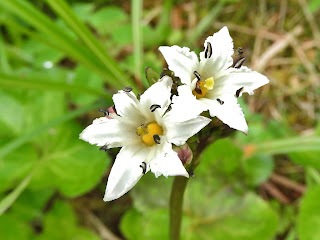 A beautiful sedge reminded me of wetland monitoring in Maine. 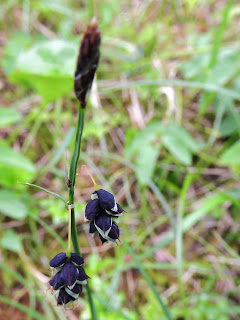 A stalk of white orchids caught my eye through the green. 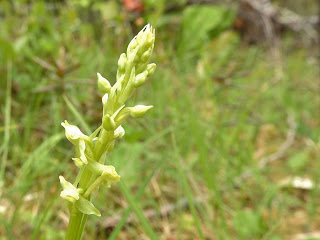 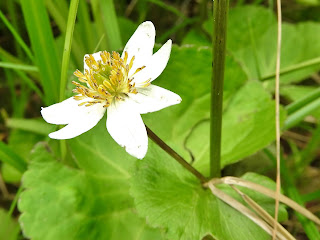 A new species of starflower – later identified as the Arctic starflower (Trientalis europaea L. var. europaer) also caught my eye. It grows in Scotland and Northern England as well, and is the provincial flower of Värmland province in Sweden. 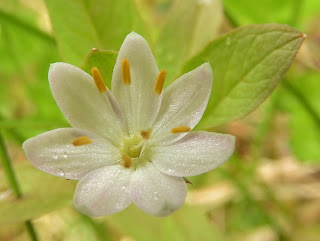 Many different species of blueberries and huckleberries were in bloom all along the trail! 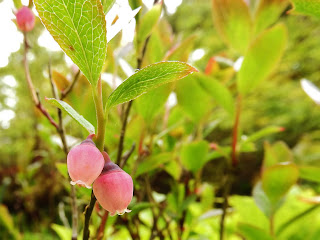 And I even saw round-leaved sundew on a rotting log in the sphagnum! 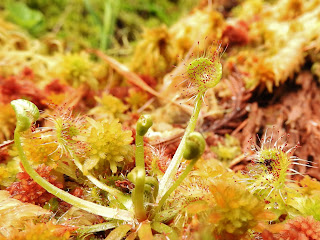 I heard the lifeguard-whistle-like calls of varied thrushes all along my hike, but only saw this one. It had a beak full of insects for its babies! I also heard a barred owl, with mixed feelings. 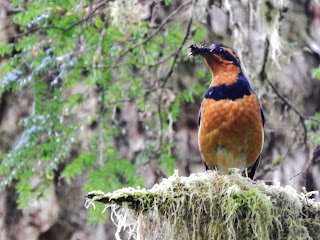 I’ve seen many little leaves and flowers that I can only guess are related to Pyrolas (shinleaf) from back home. 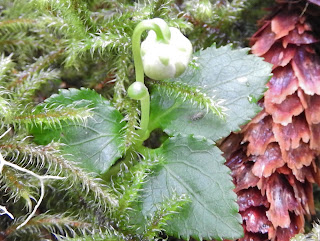 The bunchberry I saw had bracts that were greener than ours, and flowers that were darker in the center. It might be Cornus suecica or a cross. 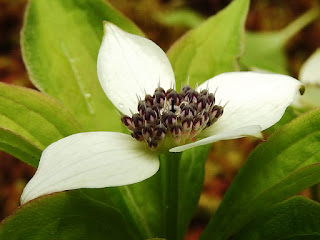 Wikipedia: “Where Cornus canadensis, a forest species, and Cornus suecica, a heath or bog species, grow near each other in their overlapping ranges in Alaska, Labrador, and Greenland, they can hybridize by cross-pollination, producing plants with intermediate characteristics.” 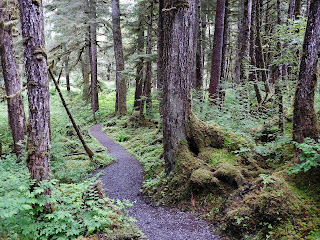 After my hike I headed back into town, met Tim for dinner to interview him, and then watched a lovely sunset over the ocean from right down the shore from my campsite. Ketchikan is beautiful! 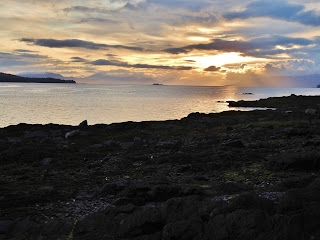