A Day on Big Moose Lake

Birdsong erupted from the forest and danced its way across a clear blue sky as we unloaded the canoes and prepared to launch on the Moose River in the Boundary Waters Canoe Area Wilderness west of Ely, MN.

The winding, sedge-lined, black-watered channel of the Moose River is a classic scene of canoe country. Even paddling upstream, we didn’t have to work very hard to overcome the gentle flow of Big Moose Lake’s outlet. On one sweeping corner, a beaver lodge poked its prickly roof above the wetland vegetation. Numerous small dams provided excitement. We relished the few moments of charging full steam ahead that it took to get over their mostly submerged sticks. Two larger beaver dams provided the bulk of water-holding capacity. One we portaged around, the other we hauled over. 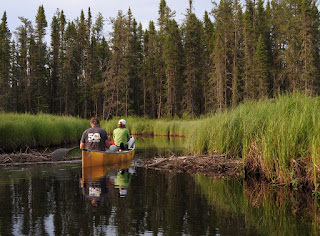 Steering a canoe around sharp corners against a current takes skill. The sternman in my canoe did a fine job. Reid Carron is a retired lawyer and avid fisherman who just happened to marry Becky Rom—the daughter of an Ely, MN, outfitter. To avoid the strongest current, Reid paddled us right along the channel’s edge, which allowed me to peek at flowers up close.

The sunny yellow blossoms of common bladderwort stood out. Similar to a snapdragon, the large, globular, lower petal angles upward, and a smaller petal fans above it. Red veins on the lower petal probably guide pollinators into the depths. These free-floating plants have no roots. Their thin leaves branch off a zig-zag stem and divide into smaller segments that look to me like a stylized drawing of a river and its tributaries. 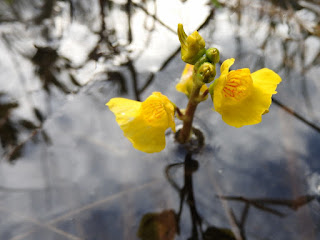 Danger lurks among the submerged leaves. These bladderworts don’t look threatening from the surface, but theirs is the largest genus of carnivorous plants in the world. It would be foolish for a plant to eat its own pollinators, so the beautiful flowers rise above the water’s surface a few inches, and its deadly snares hide below.

Each trap, nestled among the thread-like leaves, is a bladder with a door that opens inward. The plant can pump water out of the bladder, flattening it and creating a vacuum inside. Bristles near the trapdoor look like a good feeding habitat and act to funnel prey toward their demise. When a minuscule invertebrate nudges trigger hairs near the door, the flap swings inward and sucks in both water and lunch. The door snaps shut as the bladder fills.

Digestive enzymes and resident bacteria digest the prey, which takes anywhere from 15 minutes to two hours, depending on their size. To reset the trap, the plant uses special cells to pull nutrient-laden water into the stem. Not only does this feed the plant, it restores the vacuum that is essential for the capture of future prey.

With such a unique lifestyle, clean water with an abundance of microscopic life is essential for bladderwort.

And maintaining the clean water that is such an integral part of the Boundary Waters was an objective of this trip.

The canoe behind Reid and me was paddled by Steve Piragis, the owner of an outfitting company in Ely. He and Reid had been tapped to guide Idaho journalist Kris Millgate into the wilderness. I tagged along as a portage mule. After listening to a panel discussion on the proposed Twin Metals copper mine that would impact the Boundary Waters’ watershed, Millgate wanted to find out more. 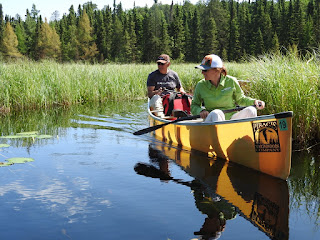 She also wanted to capture the beauty of the Boundary Waters and to introduce her western audience to its charms. It was fun to watch her work. Steve and Reid fished (tough job!) while I paddled Kris out to an island. She hung precariously over the side of the bow, expensive camera almost skimming the waves. Then she stood behind her tripod atop a rocky knoll, squinting into the sun and wind like a warrior going into battle. We all fished for a while, having somewhat less luck with flies and lures than the bladderwort has with its bristles. Finally, we napped under noonday sun that was too bright for good photography. 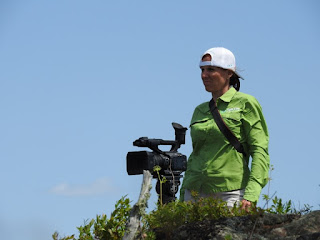 As both sun and wind diminished, we prepared for the paddle out. The evening light was magical. In the stern, now, I was able to draw close enough to photograph bladderwort flowers, glowing golden against deep black water.

We’re all trying to capture something here, right? A microbe, a stunning shot, the essence of an issue, the imagination of voters, a bit of peace, or an experience to remember...The mining issue is large, and others have covered it in detail. I was just happy to spend a day on the water with people who care about it. The chorus of birdsong, the work of a beaver, an encounter with a lovely flower that needs healthy water: these things make forming my own opinion about the value of protecting their home an easy one. 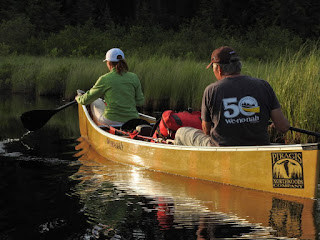