Dreaming of an Elfin Skimmer

As we entered the soft mat of the fen, the starry white flowers of three-leaved false Solomon's-seal shone among puffy green clouds of sphagnum moss, and warm sunshine perfumed the breezes that wafted under my nose. I carried a camera. Kaylee wielded an insect net and backpack full of bug jars. As she began swishing the net through the tips of bog laurel and cranberry, I absent-mindedly mused “I hope we find an elfin skimmer today.”

At less than one inch long, elfin skimmers are the smallest dragonflies in North America. Just that superlative, plus the fact that they inhabit the magical spaces of bogs and fens, and have a delightful name, has endeared them to me. But I’ve only known of their existence since last July, when the naturalist and author Sparky Stensaas led a field trip for us to a nearby fen and also expressed hopes of seeing one. To be honest, although they’ve zipped around in my imagination since that day, I’ve never seen one, and I couldn’t even tell you how to identify them in the field. They’d be shimmering and fairy-like, I presumed, just like my wistful, but not exactly rational, request to the universe that we find one.

My official, stated purpose for the day was to offer assistance with plant identification and logistics at the Museum’s first BioBlitz. A bioblitz is an intense period of biological surveying in an attempt to record all the living species within a designated area. Most bioblitzes invite the public to join in the fun to learn more about biodiversity (including dragonflies with fanciful names) and better understand how to protect it.

Kaylee Faltys, the Museum’s Curator, had rounded up 13 experts and participants who were interested in exploring Sugar Bush Fen in Northeast Lake State Natural Area. We’d all doused ourselves in bug spray before taking off through the woods and onto the soft, sphagnum moss mat of the fen. 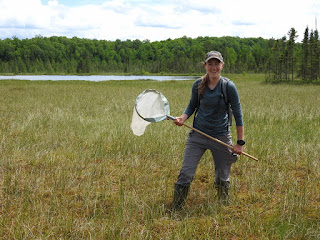 The fen was a dream. We caught a tiny spring peeper in a bug jar, and admired the frog’s suction-cup toes before putting him back on the hummock from whence he came. We slogged through the shade-less, boot-grabbing sedge mat to reach the enchanted pool of liquid darkness at the center. Water lilies dotted its margins, and tiny thickets of sundew, too. Each spoon-shaped leaf bristled with tiny pink hairs, and every luminous hair sparkled with a drop of either sticky sweet nectar or deadly digestive enzymes at its tip. A few leaves were still digesting a six-legged lunch.

The graceful, nodding stems of fen sedge brushed our muck boots as we finally exited the wonderland, ready for some shade and a shower.

Back at the Museum, Kaylee’s real work began. She started by emptying out the jumbled, bug-filled jars, spreading the wings of dragonflies and butterflies so that they could dry properly, and pinning the smaller insects on white foam. With the specimens preserved, she could then turn to the task of identification. For my part, I uploaded plant photos to the iNaturalist website, and tagged them as part of our CNHM BioBlitz 2017 project, which anyone can explore.

I was at my desk, deep into computer work, when Kaylee’s voice preceded her around the corner: “We found an elfin skimmer!”

His tiny body was pinned in one corner of her white foam square. Having finally done my research, I could tell by his pale blue, pruinose (frosted like a grape), abdomen that this male had matured fully after a shiny black, 10-day adolescence. In life, he would have patrolled a small territory surrounding a single puddle in the fen’s floating mat. Kaylee probably netted him from the bristle of sedges near the fen’s open pond.

Not being a strong flyer, he would have perched—clear wings drooping forward—when not chasing off rivals. After mating with a female, he would have guarded her as she deposited eggs into his pool with dainty taps of her brightly striped abdomen. Female elfin skimmers look quite different, and their black and yellow markings are thought to imitate wasps and provide some protection from predators. Plants don’t care about warning colors, though, and the skimmers’ size makes them vulnerable to becoming mortally entangled in a sundew’s trap.

Now, this elfin skimmer is perched on a pin for perpetuity. His mortal trap was Kaylee’s net. He’s no longer able to take shimmering flights through my dreams. Looking through the microscope at his crystalline wings, frosted body, and sparkling brown eyes, I feel like I’ve been given a precious gift. And yet, by pinning down a glittering zip of imagination and making it real, I feel as though I’ve lost something, too. 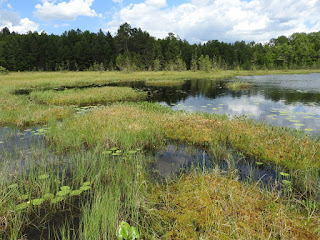 For 50 years, the Cable Natural History Museum has served to connect you to the Northwoods. Come visit us in Cable, WI! Our new exhibit: "Better Together--Celebrating a Natural Community" is now open!
Posted by Emily M. Stone at 6:00 AM