Rare Plants in a Rare Place

An old two-track led us into the woods, but almost immediately we veered left and crashed off into the unknown. Bushwhacking means alternating between watching your feet on the uneven ground, and protecting your eyes as twigs swing back or appear out of nowhere, so when I finally looked up, I was stunned. A bedrock cliff rose straight out of the creek bed we’d just crossed. Where were we? 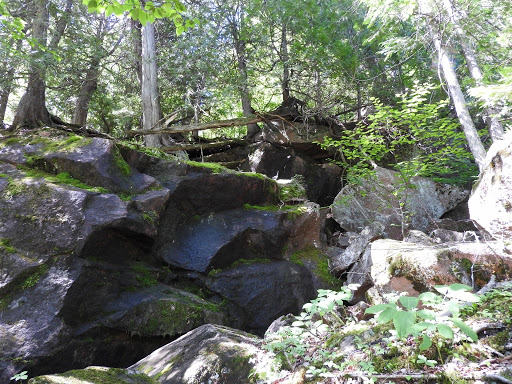 The craggy rocks, deep hemlock shade, and lush understory of ferns felt more like my botany field trips in the mountains of Maine, New Hampshire, and Vermont, than plain old Wisconsin. As I admired exposed faces of pink granite, it dawned on me that these rocks are part of a mountain range—albeit a very old and worn-down one. The low hills of Penokee Range stick up higher than most other things in Northern Wisconsin, (but lower than the younger mountains out east,) and also contain some of the highest quality plant communities in our area.

“Here it is,” came Steve Spickerman’s voice from up ahead. Spickerman is the Forest Ecologist for the Great Divide District of the Chequamegon-Nicolet National Forest (CNNF), and part of his job is keeping track of how rare plants are doing. I picked my way over moss-covered rocks toward Steve, and found a familiar-looking fern nestled in among boulders near his feet. It wasn’t familiar because I’ve seen it recently, but because I used to see it all the time in Maine and Vermont while I was in graduate school at the University of Vermont. 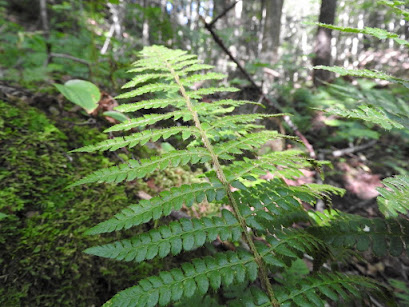 While common out east, Braun's holly fern (Polystichum braunii), is a Wisconsin Threatened plant. Its evergreen leaves were shiny and robust, and near the ground the stalks were fringed with big, papery scales in an orangey shade of tan. This fern needs the cool, shady habitat often found on rocky, forested slopes; in ravine bottoms; and at the bases of cliffs. Check, check, and check. Wisconsin’s climate is likely a little on the dry side for holly fern, which may be why it is uncommon here.

Around the world, this same species is native to Alaska, British Colombia, Newfoundland, Europe, China, and Japan. Braun’s holly fern also occurs within sight of the popular hiking trail at the nearby St. Peter’s Dome recreation area, but hardly anyone pauses long enough to notice. I, for one, am typically focused on spring wildflowers instead of the green backdrop of ferns.

As we meandered farther down the ravine, the angular rocks went from being the size of basketballs and wagons, to being the size of refrigerators and sofas, sometimes with slopes of smaller talus intermixed. On one of those jumbled slopes, Steve stopped again. This time, the fern at his feet wasn’t robust and evergreen, it was flimsy looking and yellow around the edges. Its fronds were also a little shorter and wider than the typical fern geometry. The leaves will soon wilt into the ground for the winter, and begin from scratch next spring.

Spreading wood fern (Dryopteris expansa) is another cosmopolitan species. It was first described in Germany, and also grows in Spain, Greece, eastern Asia, and California. According to the Wisconsin DNR, the habitat of this “Special Concern” plant is, “cool coniferous (balsam-fir, white cedar, hemlock) to mixed forests, sometimes in cold canyons.” 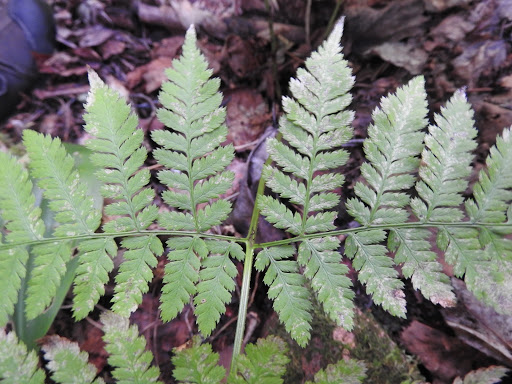 Spreading wood fern is a species of “Special Concern” in Wisconsin. Photo by Emily Stone.

Finding these two ferns—with their surrounding rock fields showing few signs of disturbance—was pretty much all that was needed for the official rare plant survey that was our goal for the day. With some species, like the highly rare and coveted ginseng, the botanists will actually count and mark individual plants so they know for sure when one is gone (vs. just being hard to find). These ferns only require a general check-up every few years.

“I have the best job on the Forest,” Steve told me as we admired the unique landscape. His field tech, Stephen White, who just earned a permanent position, nodded along in agreement. These guys are a testament to the fact that the Forest Service isn’t just about cutting trees. They also manage landscapes for plants who could never become lumber, and for wildlife who no one hunts. In order to manage well, they do lots of scientific research and monitoring, too. 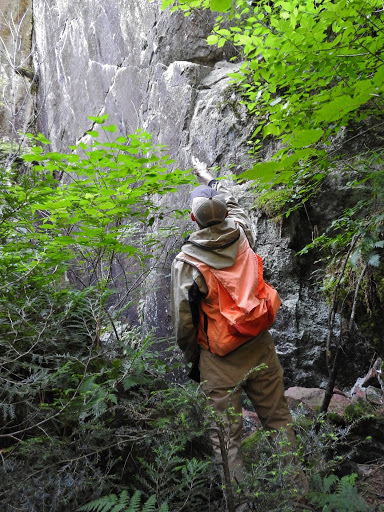 Even with rare ferns all around my feet, I couldn’t stop looking up. Sheer cliffs, talus slopes, twisted trees growing out of giant boulder fields…it really didn’t feel like Wisconsin. With such a locally rare habitat type, it’s no surprise that this area—the untracked forest beyond tourist-packed Morgan Falls—has one of the highest concentrations of rare plants on the entire Chequamegon-Nicolet National Forest.

The specialness of this area has been on many peoples’ radar for decades. The area around St. Peter’s Dome was recommended for inclusion in the Eastern Wilderness Areas Act of 1975, but a snowmobile trail through the center of it was just too popular. Instead, it’s been designated as a Special Management Area, a Research Natural Area, a State Natural Area, and an Important Bird Area.

As I scribbled notes about the day in my little field notebook, Steve chimed in. “Please make sure people know that this area is out here for them to enjoy…but there are rare plants, rare snails, and fragile habitats everywhere, so they should be careful to stay on the trail.” That’s good advice for many reasons, including the chance that you might get lost in a place that looks nothing like Wisconsin.

For more than 50 years, the Cable Natural History Museum has served to connect you to the Northwoods. The Museum is now open with our brand-new Mysteries of the Night exhibit. Connect with us on Facebook, Instagram, YouTube, and cablemuseum.org to see what we are up to.