The setting sun was in my eyes and a headwind in my face as I rounded one of the many curves on County Highway D along the eastern shore of Lake Namakagon. Eager to see today’s news, I squinted through the trees as I coasted along, and watched for that first glimpse of the nest. Who would be home today?

Visible by boat, car, and beer-and-pizza deck, the osprey nest near the Loon Saloon on Lake Namakagon is a staple of local wildlife watching. This year, my usual schedule disrupted, I’ve made the nest a destination on more bike rides than ever before, and was rewarded with many great osprey observations.

As soon as cold winds first licked at patches of open water last spring, I was out searching for returning migrants. In my Runkeeper app, I labeled my bike rides with who I observed. April 1: no osprey. April 10: loons, but no osprey. April 15: one osprey on the nest. April 16: Two ospreys on the nest! 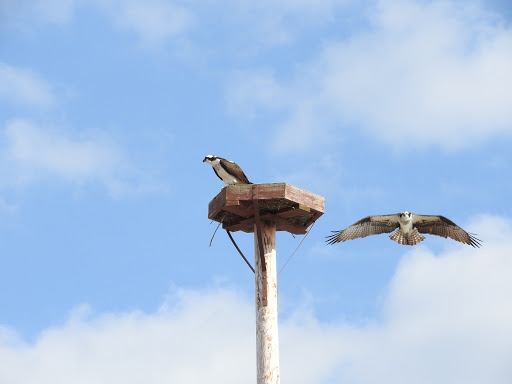 Male and female ospreys return back to the same nesting territory year after year. Within a pair, you can usually tell identify the female by the darker brown streaking on her chest. Photo by Emily Stone.

What a shock it must be for these world travelers to leave their wintering ground in Florida or South America and arrive “home” to the Northwoods with ice in the bays, snow squalls blustering, and ice storms threatening. As with many birds, the male arrives on the territory first, and the female joins him soon after. Ospreys are pretty devoted to their mate and their territory. It saves them a lot of trouble to simply head for home and know that your compatible partner will show up there, too.

Through the end of June, my observations were pretty ambiguous. What did it mean to see one, two or no osprey on the nest? Were the missing ospreys off hunting? Was one hunkered down below the sides of the artificial nesting platform perched on top of a tall pole?

Once I caught sight of an osprey carrying a stick. This was probably the male, since he brings sticks as a part of his courtship ritual, and the female will arrange them to her liking. Nest building sometimes continues through incubation and early chick-hood, so I couldn’t be sure what it meant about their schedule. After the pair copulates, it takes 14 days for the female to lay her first egg. She’ll lay another egg every one to three days, ending up with between 1 to 4. That’s weeks of action that I couldn’t see from the ground.

Males occasionally take a turn at incubating during the day, but females cover the nest all of the 37 nights it will take them to hatch. She starts incubating as soon as the first egg is laid, and the chicks hatch in the order they were laid. Those third or fourth chicks are often much smaller, and are the most likely not to survive.

Finally, on June 23, I hit the jackpot. One adult osprey perched on the edge of the nest, and two small heads poked up above the wooden rim. In the dim evening light I couldn’t see many details, but two days later I again saw a juvenile’s head in better light. Already past the downy stage, the little one was sporting small, sleek feathers with the distinctive black eye stripe of their parents already visible. Both ospreys’ eyes glowed in the sunlight—the chick’s were dark red (a juvenile trait) and the adult’s were yellow. I later heard reports that there might have been three—or even four—chicks in the nest at some point, but I never saw more than those two. 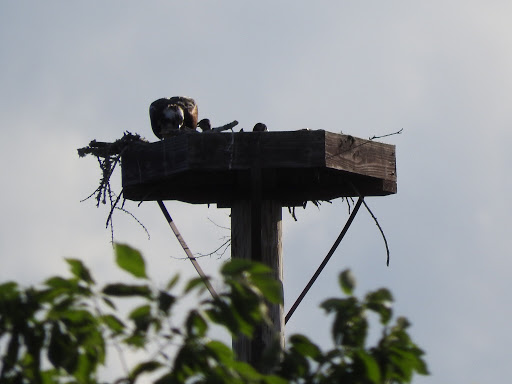 The young osprey chicks’ heads only barely stick up above the sides of the nesting platform. More than 80% of occupied osprey nests in Wisconsin are found on man-made structures. Photo by Emily Stone.

Osprey chicks must grow fast. Newly hatched, they weigh only 1.8-2.1 ounces. By the time they fledge in 8 to 10 weeks, they’ll weigh between 32 and 64 ounces (that’s 2 to 4 pounds)! A diet of fish fuels that growth. To hunt, an osprey will hover above the water, peering into the shallows with sharp-eyed concentration. Although a dive may begin head-first, it ends with talons outstretched as they plunge into the water. Special scales and sharp barbs on their toes help them grip on to slippery fish. A reversible outer toe allows an osprey to carry a fish with its head facing forward, in the most aerodynamic position. With strong wings, they can carry fish up to about a foot long and about 4 pounds.

The next time I spotted the chicks, they were clearly adult-sized teenagers. Buff tips on their dark feathers, dark streaking on their pale tummies, and red eyes gave away their age. Oh, and their behavior. One chick flapped awkwardly, ejected a mute (poop) over the side of the nest, and then hunkered down by Mom as if for a nap.

Now too big and restless to hide down inside the nest, the juveniles showed up more regularly. On one long bike ride, I found an empty nest and a single osprey was hovering on the wind, swooping and doing acrobatics over the lake. When this aeronaut landed, their mottled juvenile feathers became visible. The youngsters were flying! An hour later, as I headed back past the nest, both chicks were at home. One of them was tearing fiercely at a large fish. A first catch perhaps? I didn’t expect them to grow up so fast! 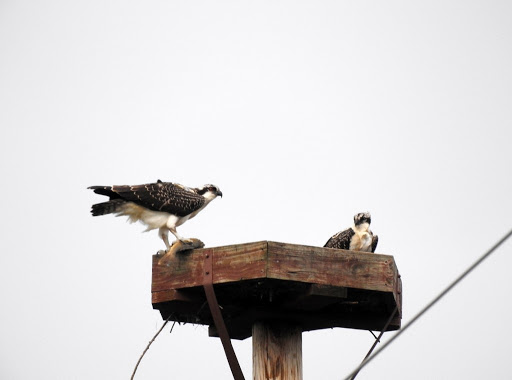 Of course, migration is about to begin again, and virtually no ospreys will be left in Wisconsin by the end of October. The young ospreys will migrate alone, relying on instinct instead of parents to show them the way. And then they’ll stay there—in their warm wintering grounds—for two or three years before they return north to breed.

I’m not quite ready to see them go. So, watching eagerly for that first glimpse of the nest as I biked along, I held my breath. A single osprey perched on the wooden nest platform. Zooming in for a photo, I quickly confirmed they were one of the red-eyed juveniles. It’s eight weeks after my first glimpse of their little heads. My schedule may have been disrupted this year, but the ospreys are right on track with theirs! 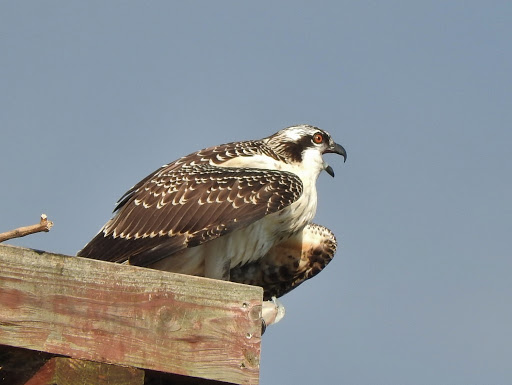 For more than 50 years, the Cable Natural History Museum has served to connect you to the Northwoods. The Museum is now open with our brand-new Mysteries of the Night exhibit. Connect with us on Facebook, Instagram, YouTube, and cablemuseum.org to see what we are up to.