The Grammar of Animacy

*Update: THEY was named word of the year for 2019 by Merriam-Webster!

“We no longer face a physical frontier, but a change in philosophy, a complete reversal of our attitude toward the earth that might open the door to a golden era far more resplendent than the old.”
– Sigurd Olson, Reflections from the North Country

I’ve been thinking a lot about language recently, and the cultural implications of the words we choose to use. A few weeks ago, the Merriam-WebsterDictionary made headlines by endorsing use of the pronoun “they” when referring to “a single person whose gender is nonbinary.” This is great news for our neighbors, relatives, and anyone for whom “he” or “she” just doesn’t feel right.

I think it’s also great news for the natural world.

Long before those headlines—since 2013—I’d been thinking about the implications of the pronouns we use for non-human living beings. It all began when Robin Wall Kimmerer won the Sigurd Olson Nature Writing Award for her book Braiding Sweetgrass:Indigenous Wisdom, Scientific Knowledge and the Teachings of Plants. I attended her award ceremony and lecture at the Sigurd Olson Environmental Institute on the Northland College campus—a trip back to my alma mater. 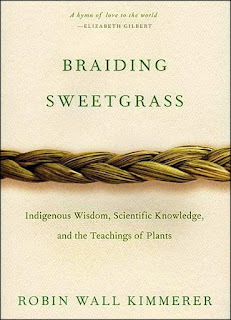 Robin’s wisdom—as a botanist, a woman, and as someone deeply connected to the Earth—spoke directly to my heart and my mind. Her words continue to influence how I write, and think, and interact. Most of what she said has become mixed up with what I later read in her book, and integrated seamlessly into my worldview, but I do remember clearly that she talked about the Grammar of Animacy.


In language, animacy is an expression of “how sentient or alive the referent of a noun is.” When we refer to something as “it,” we are saying that the subject is inanimate—without feelings or agency. We generally reserve the animate “he” and “she” for humans and our pets.

But Robin is learning Potawatomi—the language of her ancestors. In Potawatomi, and many indigenous languages, not only do people use the equivalent of “he” and “she” to speak of animals and plants, but also rocks and rivers, mountains and fire, and places.

“In English, we never refer to a member of our family, or indeed to any person, as it. That would be a profound act of disrespect. It robs a person of selfhood and kinship, reducing a person to a mere thing. So it is that in Potawatomi and most other indigenous languages, we use the same words to address the living world as we use for our family. Because they are our family,” wrote Robin in an article for Moon Magazine.

That night, Robin suggested a new set of pronouns that could acknowledge animacy in beings that don’t fit into the binary categories of “he” or “she.” “Ki howls at the moon,” she suggested for the singular. Or “Kin are flying south for the winter.” I think it’s beautiful to call a flock of geese our kin, but perhaps also impractical to ask our language to change that much.

That’s where the singular “they” comes in, along with the corresponding “them,” “their,” “theirs,” and “themselves.” This one little shift in our language may make room for similar changes that will continue to increase respect for marginalized groups. We’ve already moved away from “he” as the gender neutral pronoun. Languages are living things.

Since Robin’s talk, I’ve been trying to use the grammar of animacy when I write about non-human, living beings in our natural world. Fresh out of science classrooms, I used to be concerned with avoiding the plague of anthropomorphism. Now I think it’s just as arrogant to talk about animals and other living beings as if they don’t think, feel, or perceive.

The singular “they” is a useful option, and it’s not our only one. The easiest words for me to use are “who” and “whom” in place of “that.” Whenever possible, I try to figure out the sex of an animal so that I can use “he” and “she” accurately. For instance, I wrote “Snowy owls can be territorial even in their winter feeding areas, and while there aren’t many other owls around to challenge him, this guy (male, as indicated by his very white feathers) seems to have staked out his claim.” Bees and wasps are almost always female, singing birds tend to be male, and old white pines are usually Grandmothers.

Changing habits is hard and I admit to being inconsistent. Still, even occasionally remembering to use the grammar of animacy may have a positive change in the way we and those around us perceive the world.

I hope that you will join me in using language that acknowledges the selfhood and kinship of our neighbors and our relatives here on Earth.

“A living language is continually made and remade, woven out of the silence by those who speak.” –David Abram