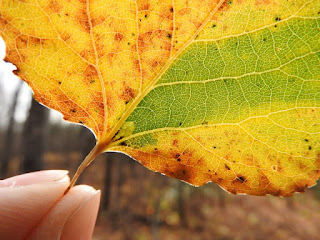 Leaves fell like glitter on the sun-showered path. These tiny, yellow hearts of quaking aspen fluttered wildly as they descended, eventually ending up in drifts built upon the wilted bodies of their companions. Placid raindrops beaded up on their slick surfaces, shining like jewels in the slanting rays of afternoon sun. A gentle sweetness wafted on the lukewarm breeze.

I do love fall.

And yet I already miss (just a little) the vibrancy of a buzzing summer day. Maybe if we could hold on to that green energy for just a little longer . . .

The golden leaves almost all had their own little hitchhiker hiding out between those slick, waterproof leaf skins. My evidence? Bright green trapezoids of chlorophyll captured between the first and second veins on one side of the leaves’ midribs. The very top of the leaf’s stem was thickened, too, just a little wider than normal. And where the thick stem and bright green met, a small patch of brown frass (caterpillar poop) filled in a section between veins. The trees are not responsible for the variegated leaves—some insect had created a gall.

Back in July, a small, brown moth with white-fringed wings laid an egg on the leaf petiole. She did this without the help of a male. This species of moth is parthenogenetic, which means that the embryo developed even though the egg wasn’t fertilized. Males hardly ever occur in the population.

If you read my article last week, you may remember that I’m trying to avoid calling living things “it” because it reduces them to an object. In the case of this moth, not only does using the “grammar of animacy” acknowledge the sentience of this creature, it also helps us learn more about the moth’s biology. As I continue to use the pronoun “she” through the rest of the article, you’ll be reminded of this moth’s interesting reproductive strategy.

By September a translucent larva hatched and bored into the leaf’s petiole, causing the stem to swell into a small gall. Munching her way up inside the leaf under the cover of darkness (she retreats into the thickened part of the stem during the day), the leaf-mining larva interrupted the mechanisms the tree normally uses to draw chlorophyll out of the leaf during the waning days of autumn. 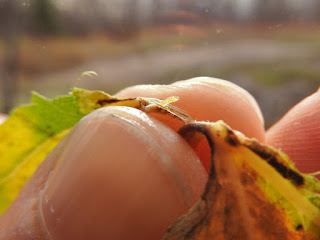 How does she do this? One hypothesis goes like this: the caterpillar hosts a common bacterium, called Wolbachia, in her body. Perhaps through the caterpillar’s frass, or other bodily secretions, Wolbachias enter the leaf, where they manipulate plant hormones that control when a leaf dies, and cause one part of the leaf to retain its chlorophyll.

The result is a “green island” in the yellow aspen leaf.

Such a tiny caterpillar would dry out in the summer heat if she tried to pupate high in the tree canopy. Instead, she takes advantage of pleasant fall weather and then hitchhikes on the falling leaf down to the damp forest floor. Once there, she steals a few more bites of the green energy she’d hoarded in the leaf and then pupates in relative safety and an agreeable microclimate. The soon-to-be-moth spends the winter in her cocoon, which is loosely woven to the surface of the now-brown leaf.

The receding snow and warming sun of May stimulate metamorphosis, and the new moth emerges from her winter sleep.

While not native to the United States, this drab moth and her tiny caterpillars have traveled far. No doubt this was facilitated by their ability to reproduce using parthenogenesis. They live across all the continents in the Northern Hemisphere, and have become quite common here and in eastern Canada. As a result of their wide distribution, some of the information I have presented here was translated from Swedish and Dutch! I can track this organism throughout the world by the universal language of scientific names. Ectoedemia argyropeza may not roll off your tongue, but scientists all over the planet use this one name to refer to this particular species.

Whatever you call it, the vibrant green islands those moth larvae preserve are a lovely part of fall.

Editor’s note: this article is an expansion on a Natural Connections article from 2012.