Paddling through a Forest

The ripples from my kayak set the trees to wiggling among the lily pads. Already Dr. Seuss-worthy, the conifers looked even more whimsical when viewed as reflections on the twinkling surface of the Little Maumelle River. With a few quick paddle strokes, I slid right through the yellow water lily leaves and was soon bobbing eye-to-trunk with the buttressed base, striated bark, and feathery green needles of a bald cypress tree. 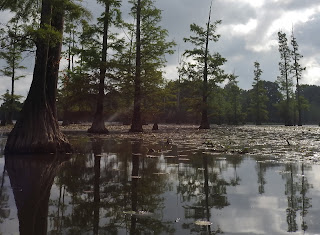 In an airy grove, tall trees with graceful boles, gnarled branches in various stages of death, and tufty caps of grass-green needles rose from the water. If we were in prairie country, we might stroll beneath the lacy canopy and call this a savannah or woodland. When the stroll becomes a float, the forest becomes a swamp.

My parents and a Vermonter named Gary Moore slid their canoe and kayak into the water a few minutes later. We’d all come to Little Rock, Arkansas, for the Outdoor Writers Association of America’s annual conference and were drawn to this pre-conference trip by the promise of an exotic experience by a familiar mode of travel. For locals, the Little Maumelle River Water Trail’s 8.2 miles of calm waters that flow imperceptibly toward the Arkansas River offer relaxing solitude surprisingly near the city.

Part of the water trail flows through The Nature Conservancy’s William Kirsch Preserve at Ranch Northwoods—an area that was slated for development until the owner realized that floods would be a constant headache. On route to the landing, Randy Zellers, of the Arkansas Game and Fish Commission (AGFC), drove us through brown fields that had were still dotted with mud chimneys built by crawdads.

When Kirsten Bartlow and Jeff Williams, both also with the AGFC, took over as our guides on the water, they continued to point out signs of recent high water. The 500-year-flood had been brought on by heavy rains and emergency dam releases in Oklahoma.

Being from Iowa, my parents and I are no strangers to the effects of frequent floods. Our local Turkey River jumps its banks almost every year. We’ve even paddled through forests before—in the backwaters of the Mississippi River. The dusty high-water marks on tree bark and sad, brown colors of drown vegetation barely registered; we were captivated by those trees. 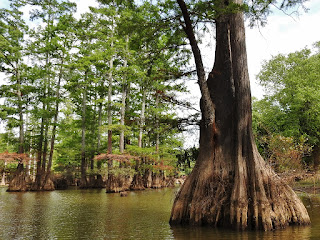 Bald cypress trees are native to the southeastern United States. As we floated in the shady spaces between their stately trunks, Kirsten explained that this even-aged stand is typical of a forest that all germinated during the same, rare season of perfect conditions; counterintuitively, that means a drought. Their seeds must germinate on top of soggy but not flooded soils, and then shoot up quickly enough to keep their heads above floodwaters during the growing season. They have enough cold tolerance to grow farther north, but the trees struggle to reproduce where ice cover damages the tender saplings. As with other trees that frequent saturated soils, bald cypress trees flute out at the base in stabilizing buttresses. When hiking up north, I look for black ash trees with this same growth form in order to spot ephemeral ponds even when they are mostly dry. Cypress trees grow one step further, though. Their root systems send projections upward, where they poke through the water’s surface like cartoonish wooden fingers called cypress knees. Once thought to be a sort of breathing tube, the current evidence leans more toward additional structural support. Since the trees regularly remain upright through hurricanes, this explanation seems logical to me. 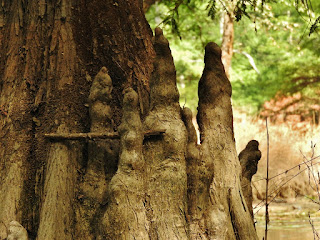 Similar to the bonsaied canopies of older white pines, most of the cypress trees had a few puffy clouds of live needles punctuated by elegantly weathered branches jutting out at artistic angles. Woodpecker holes, giant cavities, and hollowed trunks added even more character and wildlife value. We spotted flycatchers, kingfishers, mockingbirds, herons, magnolia warblers and prothonotary warblers making themselves at home. I was surprised, actually, at how many things felt familiar to me, even though the ecosystem was new. (You might hear more about them in the future.)


The day warmed toward an excessive heat warning and the humidity became oppressive, so we turned back to the landing. A low branch, its needles likely suffocated by the flood, glowed a rich shade of rusty brown. “That’s what they all look like in the fall,” explained Kirsten, “right before they lose their needles.” I paused in mid-stroke, baffled.

Ever since I took my first class on woody plants, I’ve been saying that tamaracks are the only deciduous conifers. They have cones like pines, but lose their leaves like maples. Dawn redwoods—native to China—also have that unusual combination of traits. As it turns out, bald cypress is so named because they stand bare from October through March, and regrow their needles in spring. With my penchant for looking north, I didn’t realize that I needed to add “in the Northwoods” to my declaration about tamaracks. Now I will.

After pulling my kayak onshore, I straightened up to gaze back out across the swamp. Those delightful trees still sent their reflections wiggling among the water lilies. They also wiggled into my heart, and snuck in between some of my preconceived notions. As is often the case, what I’d expected to be an exotic experience had plenty in common with home. 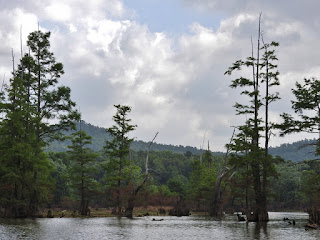