The hook rattled as I slipped it up out of the metal eye and opened the small, yellow door. This cabinet was well-stocked with provisions, but it looked nothing like my pantry. Instead of shelves lined with boxes of food, there were routered grooves filled with little green caterpillars and yellowish blobs. The front of the grooves was covered in a sheet of Plexiglas—a window into the lives of mysterious neighbors.

Ever since our talented volunteers designed and built this solitary bee cabinet for the Bee Amazed exhibit last spring, we’ve been eagerly watching and waiting for new residents to move in.

When most people think of bees, they imagine honey bee colonies in big white boxes, dripping with honey. When I say “wasp,” they shudder at the memory of disturbing a ground nest or papery ball of colony-nesting aggressors, stingers at the ready. This cabinet frames a very different picture.

Most of our species of bees and wasps don’t live in groups. They are solitary nesters who lay about 14 eggs over the course of their short lives. These hard-working single mothers are too busy—building their small nests, laying those eggs, and gathering provisions that will feed the larvae as they develop—to even think about stinging you unless you’re actively squashing them.

This spring I’ve rattled open that cabinet door almost every morning and every afternoon as I walk to and from work. The bees moved in first. We watched as an iridescent blue mason bee created a cell of mud inside the groove and then packed it with “bee bread,” which is a mixture of pollen, nectar, and her own saliva. Once the loaf was big enough, she laid a single egg, sealed up the chamber with mud, and began to provision the next cell.

Now the length of the groove is filled with little brood chambers, and translucent bee larvae can be seen munching on their baby food. They will pupate and spend the winter right there in the cabinet, emerging as adults when the apples blossom.

Recently, a groove near the middle of the cabinet began to fill up with piles of little green caterpillars. Bees are almost all vegetarians—both adults and young focus on eating flower parts. Wasps, on the other hand, drink nectar as adults, but feed animal protein to their young. Wasps evolved first, and bees developed later as they began to exploit resources from flowers.

Solitary bees and wasps both engage in a type of parenting called “mass provisioning.” They stock all of the food their larvae will need into the brood cell before they lay each egg. They seal up the nest, and then leave. Their life probably doesn’t last much longer, but their eggs and larvae have everything needed to grow.

I have yet to watch the mama wasp actually carry a caterpillar into her nest, but on one sunny afternoon I did watch her carry mud and pack it onto the outer door of the final chamber. That mud tells me that she’s probably a member of the potter wasp or mason wasp group. I can count at least 5 green caterpillars in each of her brood cells, but the literature tells me some wasps stock up to 12 caterpillars per egg. In order to keep the egg from being crushed by all of this food, wasps often suspend the egg from the ceiling of the brood cell. 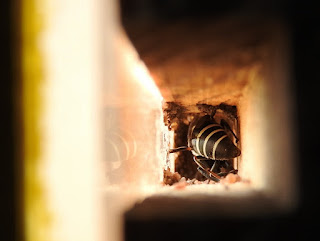 Now, if a mama wasp killed each caterpillar before storage, its soft body would soon be an inedible pile of goo. In a thrillingly awful and brilliant twist, she simply paralyzes each caterpillar with a sting. The wasp larvae will eat the comatose caterpillar alive, starting with the inessential parts first, so that its lunch stays fresh for as long as possible. Like the mason bee, this wasp’s pupae will overwinter in the nest cabinet and emerge next summer.
After the wasp finished packing her load of mud into the tunnel, I watched her back out of the nest’s entrance hole and fly off. I followed her buzzing form, expecting her to disappear from sight. Instead, she only flew a few feet, and then began sipping nectar from the tiny, maroon flowers of the figwort nearby. With my attention shifted, I started noticing other types of wasps and a few bees hovering at the blossoms. I later read that the inconspicuous flowers of figworts are among the most prolific nectar producers in the plant world.

With the wasps buzzing around, I soon noticed that a small, green caterpillar was also feeding on a flower. It wasn’t just drinking nectar, though, it was munching on the blossom itself. Now that I’d seen one, I started spotting those green caterpillars everywhere! By feeding these moth larvae to her young, the wasp was protecting an important source of nectar for herself and many others.

I’m lucky to have such exciting neighbors on my way to work. Each morning I get to open a door to new discoveries. Come visit our bee cabinet, and you can discover them, too!

BIG THANKS to Thanks to artist Sarah Peebles and her project, Resonating Bodies, for helping us with the design of this cabinet and providing the audio equipment.
Her inspiration, advice, and guidance was invaluable!