As usual, my toes were cold. So, I hopped off my fat bike and began jogging down the trail beside it instead, trying to wiggle warmth back into my feet. Crunch, crunch, crunch, I ground icy snow under my boots with every step. The day before had been well above freezing, and the briefly slushy snow was now even more solid.

I was keeping an eye on the edge of the trail when my foot landed next to the track of a larger foot. This wasn’t just some deer hunter’s big snow boot. This wide track showed five toes. And claws.

I looked into the woods behind the track. Then I glanced across to the other side of the trail. More tracks scuffed the snow and headed down a steep bank toward a wetland. My urge to follow the tracks was strong, but these were big tracks. Somewhere at the end of the trail was a big bear. I examined them more closely. The bottom of each track was compressed and translucent—obviously made in the previous day’s slush. A sprinkling of snow pellets filled the depressions made by heel, ball, toes, and claws. These tracks were at least 24 hours old. 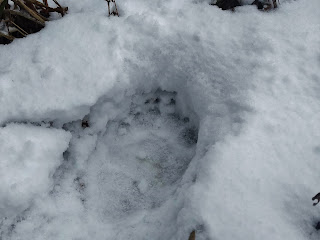 Cautiously I pushed through twiggy balsam firs and followed the trail downhill. Big, punchy tracks continued across the hummocks of the still-damp marsh. Not wanting to get my already cold feet wet, I turned back.

Besides “how close is he?” the main question on my mind was, “why was he still awake?” Bears should be hibernating right now, shouldn’t they?

Scientists think that hibernation is usually triggered by a combination of weather and lack of food. For example, one researcher observed that the final den entry often occurs during a snowstorm so that fresh snow will hide any signs that could lead unwanted guests to the sleeping bear.

A hibernating bear’s breathing slows significantly, from 40 breaths per minute down to eight. This is matched by a 50-60 percent reduction their metabolic rate. Nevertheless, bears’ huge bulk and thick fur enable them to stay within 12 degrees Fahrenheit of their normal 100-degree body temperature. A den’s small opening, snug fit, and a layer of duff on the floor also help them retain heat, although solo bears are commonly found hibernating in relatively unprotected places as well. Mother bears, on the other hand, are much more likely to stay put in snug dens while their cubs are born.

The definition of hibernation itself has been evolving over the years as scientists learn more about the winter physiology of bears and other hibernators. While it used to focus on animals who show a significant drop in body temperature, the emphasis is now on a specialized, seasonal reduction in metabolism concurrent with scarce food and cold weather. What’s more, scientists recognize that hibernation is on a continuum with the short-term bouts of decreased activity known as torpor. Not only have bears been restored to their place of esteem as hibernators, but many scientists consider them super hibernators.

What happens, though, when there is shallow snow and plenty of food? After I mentioned those big tracks to a couple of biologists, they shared their own recent bear-track-sightings, and hypothesized about the cause.

First, adult male bears use shallower dens, or even den above ground. This makes them more prone to disturbance, especially with the light snow cover and some mild days. Deer hunters may have awakened the bears. In addition, both bait piles of corn and gut piles from harvested deer may have been providing bears with a source of food that convinced them to stay awake.

Two very recent scientific studies support those hypotheses. In Russia, researchers found that when warmer temperatures occurred near their brown bears’ typical den entry and den exit dates, the length of their hibernation was shortened. The scientists are worried that this might make it harder for the bears to cope with climate change.

Closer to home, near Durango, Colorado, researchers found that both warmer temperatures and increased food availability impact the timing of when black bears enter and exit their dens. One downside is that this lengthens the bears’ active period—and increases the portion of the year when they could come into conflict with humans.

That’s a concern I share. I eagerly await the first good snow so that I can safely hang my bird feeders. I’m also not used to being bear-aware during my winter activities. As fun as it was to see those tracks, I’m very glad that they weren’t fresh. As I hopped back on my fat bike for the slog home, I just had to wonder—were his toes cold, too?