Just after dawn on Thanksgiving Day, I slipped on running shoes and jogged along the gravel road in my own, make-shift, turkey trot. As I chugged uphill and began huffing and puffing, the phrase “No Puffin Please” popped into my head, along with an image from my summer in Alaska. I never tired of seeing the punny anti-smoking signs that featured a black and white bird with a cigarette clamped in its colorful beak. Why not brag about one of your most adorable residents while also using humor to announce a law? 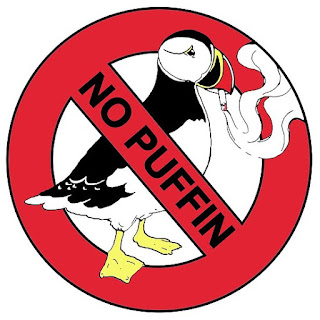 Two species of puffins nest along the rugged coast of Kenai Fjords National Park in southern Alaska. Their torpedo-shaped black and white bodies and fish-eating ways are reminiscent of the killer whales we also spotted from the tour boat, but perhaps it’s a stretch to really compare them. While killer whales can be 26 feet long and weigh six tons, puffins stand only 15 or 16 inches tall and weigh only a pound-and-a-half.

While I was excited to see both animals, neither killer whales nor puffins were entirely new to me. Back in the 1980s, before controversy ended Sea World’s orca shows, I watched as my older brother sat in the “splash zone” and laughed with glee when Shamu sent a wall of water over the railing. A decade later, my family endured a cold, foggy boat ride off the coast of Maine to see Atlantic puffins.

My wildlife boat tour near Seward, Alaska, was not much less foggy or cold than that day in Maine, but having a large indoor space with tables and windows did make it less uncomfortable. Not long after our hearts stopped fluttering from the amazing encounter with the orca playing and rolling right next to the boat, we were easing in among the craggy, life-filled cliffs of the Chiswell Islands.

Seabirds of all kinds bobbed on the waves, rested on rocky perches, and swooped through the mist. The steep cliffs offer them protection from terrestrial predators and easy access to a seafood buffet. We spotted gulls, oystercatchers, cormorants, auklets, and murres, but the puffins were my favorites.

Horned puffins look pretty similar to Atlantic puffins. Black backs, white bellies, round white faces, orange and yellow bills, and a striking crease like Cleopatra’s winged eyeliner extending back from their eyes earn them the nickname “clowns of the sea.” Horned puffins have an additional fleshy black protrusion extending elegantly up from their eyes—their horn. Tufted puffins have entirely black bodies, with a wedge-shaped white patch on their faces that sweeps back into a tuft of golden head-plumes.

All puffins are diving birds. Like our common loons, puffins must flap furiously to keep their stocky bodies aloft while flying. Once underwater, though, both puffins and loons are deep and proficient divers. While loons propel themselves almost entirely with their huge webbed feet, puffins flap their wings for speed and use their feet for rudders.

They’re all on the hunt for fish. A loon chick will float on the surface while their parent dives below and daintily offers one minnow at a time. A puffin pair’s single puffling must sit in their cliff-side crevice (horned puffins) or burrow (tufted puffins) waiting for their parent to arrive with a snack of up to 65 fish carried crosswise in their bill.

Both loons and puffins share the incubating and feeding responsibilities of parenthood and may have the same mate for many years. Loon pairs seem to stay together simply as a result of both returning to the same territory year after year. In contrast, when puffins return from their winter at sea, they gather in huge groups on the water and mated pairs are reunited there.

My turkey trot was not nearly as long as a winter at sea, but it ended in being reunited with my family, too. Waiting for me at the house were my parents who had just recently returned from a trip to Brazil. If you noticed more typos than usual in my last couple articles it’s because they (my editors) were off gallivanting. After dinner we enjoyed looking through a small fraction of the thousands of bird, jaguar, and waterfall photos that Dad took on the trip. The dark-colored toucan with its thick, colorful beak reminded me of a puffin.

While Alaska and Brazil are very different worlds, they both contain rainforests. I’ll soon be exploring another rainforest, on a Natural Connections in Costa Rica trip hosted by the Cable Natural History Museum. How do Alaska’s Chiswell Islands—with an average annual temperature of 40.3 degrees and more than 70 inches of rainfall a year—compare to the Costa Rica’s Tortugero National Park with an average annual temperature of 79.3  and 188 inches of rain?

Since I can find similarities between orcas, puffins, and loons, I’m sure I’ll be able to make some connections in Costa Rica, too.