The steady drizzle thickened into real rain as I pulled into the gravel parking lot near the Caribou Creek Trailhead. Damn rain. I was tired of trying to out-guess, out-maneuver, and outrun it. My memory may not be infallible, but it tells me that the average weather during my summer in Alaska was 58 degrees F and misting. Exasperated, I resigned myself to be out in it. 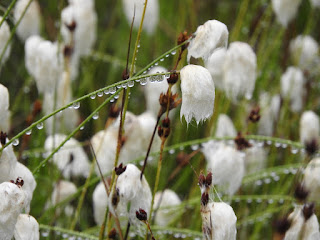 Soggy cottongrass. Also resigned to being out in the rain.

“We just had a cancellation for the public use cabin at Caribou Creek,” said the ranger in the Wrangell-St. Elias Visitor Center when I asked about things to do along the Nabesna Road. The 42-mile-long gravel road is one of only two terrestrial access points into the remote park in eastern Alaska. Within minutes I’d reserved the following night.

Now I was dodging raindrops as I went from door to door on my station wagon gathering the last of my supplies and cramming them into my pack under the cover of my back hatch. Raindrops beaded up like jewels on my brand-new, bright-green rain jacket—purchased in desperation on a rainy day at the end of a rainy week in Anchorage. 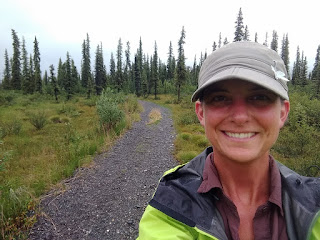 Partway up the wide, gravel trail, a bedraggled bumblebee clinging to a hot pink fireweed blossom caught my eye. Then a gray jay whistled from the top of a spruce. My willpower failed and I slid my pack down to dig my camera out from its waterproof layers. It was then I noticed that it had stopped raining. 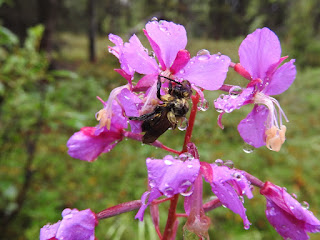 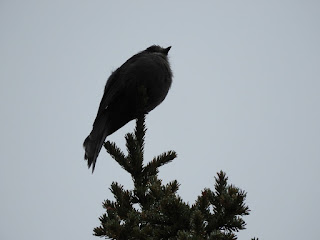 The rain held off for the rest of my three-mile hike to the rustic log cabin. It waited until I’d had a nice chat with two hikers from France who were exploring the hills above the cabin, and until I’d had a chance to wade through knee-high tundra shrubs up there, too. Then, while I cooked pea soup, sat by a cheerfully crackling fire, painted flowers on postcards, and slept on the wooden bunk, it poured. By morning, rain turned to drizzle, drizzle turned to fog, and then the fog lifted. When I started my hike back down to the road, my camera was slung handily over my shoulder. Sunshine peeked through the clouds with increasing resolve. 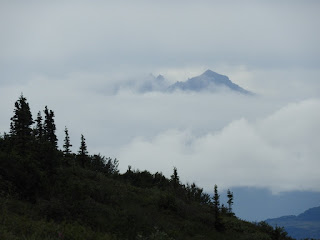 Clouds parted just a bit. There are mountains out there! 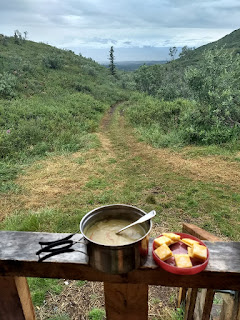 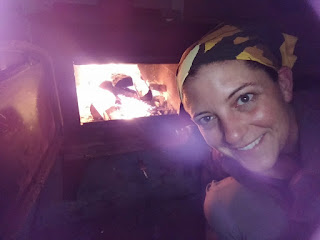 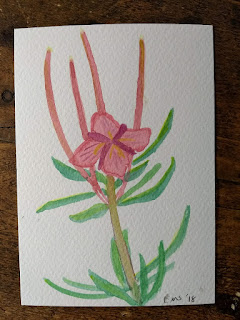 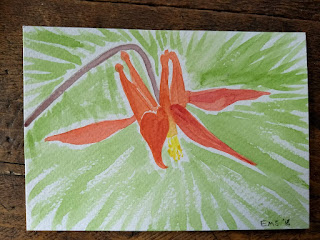 Postcard watercolor of a columbine flower. 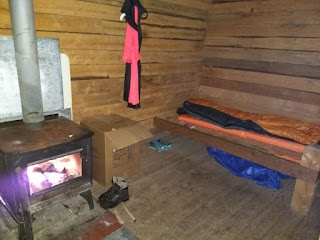 The stove and bunk. 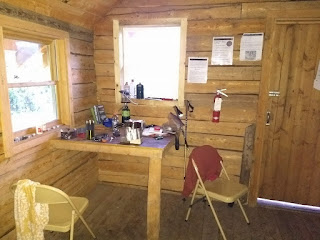 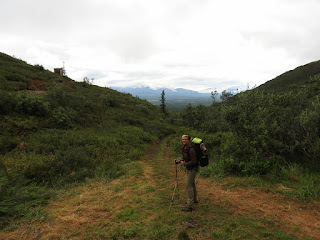 Setting out with clearing skies!

While walking among a grove of spruce near a creek, the striking crimson eyebrow of a male spruce grouse strutting among the roots and rocks caught my eye. With my attention focused through my camera’s viewfinder, my ears picked up on something else. 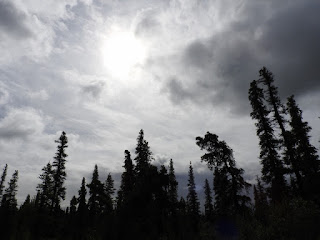 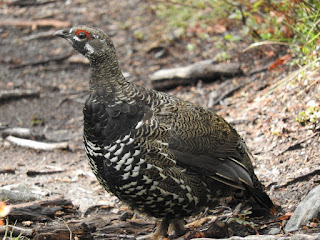 Such a handsome spruce grouse! 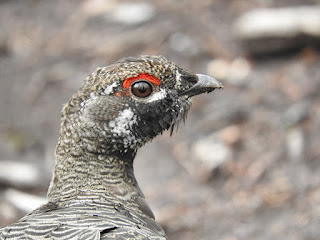 Chickadees! Soft “chick-a-dee” and other raspy calls tumbled out of the lichen-crusted spruce bows behind me. These weren’t my friendly Midwestern black-capped chickadees, but every type of chickadee makes me smile. Just like spruce grouse, boreal chickadees reach their southern limit in the lichen-crusted spruces of Northern Wisconsin. Basking in their cheerful banter, I followed their bustling movements with both eyes and lens. When they flitted out of view, I hiked on. 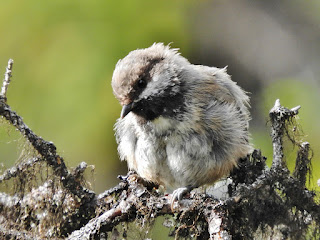 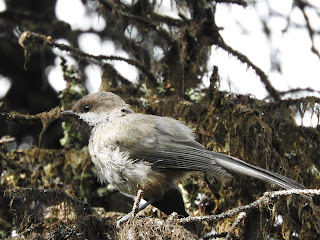 I took advantage of the free Wi-Fi at the Slana Ranger station to post photos to Instagram (follow me @emilysnaturalconnections). Of course, I included a chickadee. At my next encounter with Wi-Fi, a comment popped up on that post “Is that a gray-headed chickadee?” asked @thetundratelegraph. “Boreal chickadee,” I replied. There is no such thing as a gray-headed chickadee, I thought to myself. “He looks so gray to me!” the commenter responded. 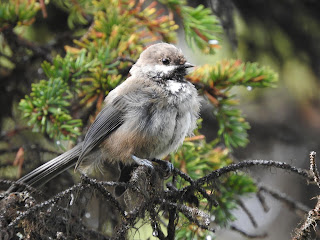 I was about to dismiss it again, when I realized that I was communicating with a former college classmate who now lives in Fairbanks. Out of curiosity, I googled “gray-headed chickadee.” This species wasn’t listed on the Cornell Lab of Ornithology’s All About Birds website that I normally frequent, but a news story popped up on the Alaska Department of Fish and Game’s (ADFG) website: “The Quest for Gray-Headed Chickadees.” So they are real! How come I’d never heard of them?

Soon I came across a 2017 article written by Gary Langham, chief scientist at The National Audubon Society. His headline named gray-headed chickadees as “the Most Mysterious Bird in the U.S.” Although gray-headed chickadees are common backyard feeder birds in Russia and Scandinavia (where they are known as Siberian tits), they are the least-known chickadee in North America, and only live in remote areas of northern Alaska and northwestern Canada. Langham billed them as “the Holy Grail of chickadees.”

While confirmed sightings in Alaska are confined to the Arctic National Wildlife Refuge and other far-north locales, the Birds of North America range map indicates that it is theoretically possible to see them in eastern Alaska—in the remote haunts near our largest National Park—Wrangell-St. Elias—the one I’d just visited. Langham wrote about hiring a bush plane, rafting an icy river, camping for days, freezing in a blizzard, and still not seeing a gray-headed chickadee. Could I have sauntered in on a pleasant trail, spent a wood-fired night in a cozy cabin, and then come across these rare birds out of sheer luck? 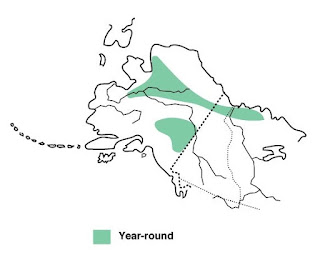 Logic says no, of course, especially as I glean more tidbits of the sparse information that exists about them. Most recently in Alaska, they’ve been seen in stands of balsam poplar trees in the Brooks Range—not at the northern edge of conifer forests like in their Eurasian range. They are also thought to be solitary birds, rarely seen in groups of more than one or two pairs. I know I saw at least two chickadees, and maybe up to five. My focus was getting a sharp photo, not on counting the chattering sprites who danced in and out of shadows. 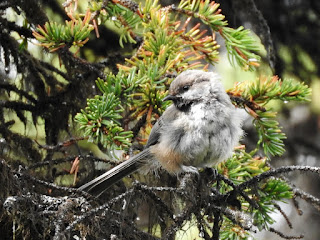 And finally, there’s my attempt at identification using field marks from the photos. Boreal chickadees have a brown head, cinnamon-colored flanks, and lots of gray on their cheeks. Gray-headed chickadees have a much fainter blush on their flanks, big white cheeks, and the namesake head. My photos are inconclusive, at least to me. The light is odd, the angles aren’t perfect, and one little stinker was preening with his feathers all askew. So, I sent my photos off to eBird and ADFG, and will wait to hear back. 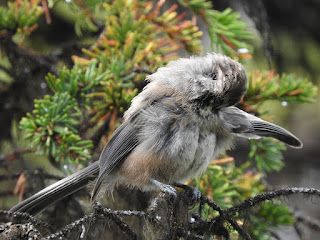 Even if the birds turn out to be “just” some boreal chickadees, they already brought me smiles and enlightened me about their mysterious cousin. Plus, gray-headed chickadees are one of the most common chickadees on the planet...if you’re prepared to travel to Scandinavia to see them. That’s a hardship I’m willing to endure. Who’s with me?

Postscript: Just as I was about to publish this blog, I received a response to my posting of a gray-headed chickadee sighting on eBird:


Hi Emily,
Thanks for the good photos of the chickadee and honest assessment.
I believe this is a Boreal Chickadee due to the light facial patch not extending to the nape as extensively as a Gray-headed would. Also, Gray-headed Chickadees typically are more contrasting in their white/brown-gray head tones than Boreal are.
If you agree and would like to change the species in your report it is easily done otherwise I can simply categorize it as unconfirmed. Thank you for your time taken to report this species. Keep it up!

Hope all is well,

Disappointing, but not surprising. It's nice to have an expert birder weigh in. I changed the species in my report.