Four out of Five Loons Agree...


The haunting wail of a common loon drifted through my barely-cracked window one night last May. Amid leaning towers of books and clothes that would soon be headed to Alaska, I gave a wistful sigh. Of all the things I was sad about leaving for a summer, the loons on Lake Namakagon and my duties as naturalist on the Cable Natural History Museum’s weekly Loon Pontoon Tours were near the top of my list. 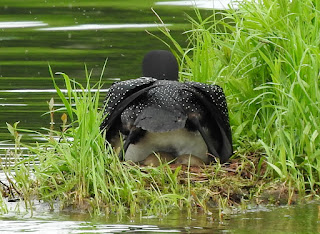 Sometimes we see incredible behaviors, like this loon rotating the eggs before starting a new sesson of incubation. Photo by Emily Stone.

After seven years of studying loons’ adaptations and interpreting their behavior for visitors, I’ve developed a much deeper appreciation for these charismatic fish-eaters.  Common loons are just the most southern-ranging (and therefore the most visible) of five different species of loons, though. Despite their name, they aren’t even the most numerous!

To my delight, common loons were a regular fixture in lakes along the highways I traveled during my sabbatical. As I drove from Haines, AK, through a narrow arm of British Colombia, I gawked at my first treeless tundra of the trip. I also spotted two common loons, their bills tucked away against the cold, as they floated on a chilly lake. 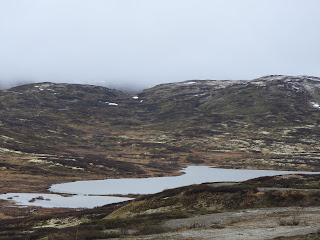 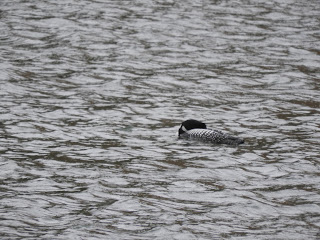 It was mid-July before I added to my list of loon species. Ed Berg, a retired ecologist and geologist from Homer, had just taken me across Kachemak Bay to see the Grewingk Glacier.

As our water taxi motored into the harbor, a gray-headed water bird floated around the corner of a barnacle-crusted rock. I snapped two quick photos, then zoomed in on my screen.


The profile was unmistakably loon. Its pale gray head, black and white stripes down the side of its neck, and smaller checkered patch on its back distinguished it from our common loons, and narrowed the ID down to a Pacific or Arctic loon. The two species look almost identical, and Pacific loons were only classified as their own species in 1985! The range maps for each species made ID easy, though. Pacific loons are found throughout Alaska, while Arctic loons are rare visitors.

Other than being slightly smaller than the common loon and nesting on lakes above tree line, the life history of Pacific loons is very similar to our familiar ones. They nest on shore, eat a variety of small fish, need a long runway to take off from the water, and are clumsy on land. In a unique twist, the ones that winter off the coast of Japan have been observed cooperating with each other to concentrate schools of fish.

Having spotted one new species of loon, my interest in seeing the others now grew. The afternoon that I arrived at the Toolik Field Station to prepare for doing caribou research, I took a short walk around the base to get a feel for the area. The tremolo of a loon flying overhead sent a thrill down my spine, and I watched the large bird land on the far side of Toolik Lake. Was it a common loon? It sounded similar. But the logo for Toolik features a yellow-billed loon, and I was sure the scientists would have chosen it deliberately. 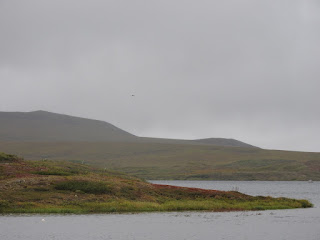 Toolik Lake--the tremelo-ing loon had just landed beyond that point. 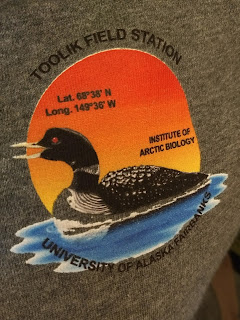 Yellow-billed loon on the logo of my awesome new sweatshirt!

During my return trip across the Toolik Lake Inlet and back toward the dining hall, I spotted a couple of loons fishing at the mouth of that little creek. Using my camera’s zoom again, I examined the black and white plumage—exactly like a common loon’s—and peered excitedly at the pale-colored bill where I usually see black. Not only were these my sought-after yellow-billed loons, but the pair was feeding their chick little minnows, in exactly the same way that I’ve watched common loons feed their young on my Loon Pontoon Tours! I later read that a pair raises chicks there almost every year.

It’s no surprise that these pale-beaked loons feel so similar to my old friends. Scientists theorize that common and yellow-billed loons only diverged into separate species during the last glacial period, 100,000 years ago or so. Ice separated loons living in the continental U.S. from loons living in the far north along the Arctic Ocean. Many of their breeding, feeding, and behavioral traits remain similar. The yellow-billed loon is the least numerous of the five loon species, as well as the largest. And, probably due to its larger size, it also has a deeper voice than our common loons.

Now that I’d seen the most similar loon to the ones I’d left back home, my last goal was to see the most different loon. Red-throated loons were probably the first loon species to evolve their current form, about 21,400,000 years ago. They are also the smallest, and weigh only 2-6 pounds compared to the yellow-billed’s 9-14 pounds. Due to their size, red-throated loons can use smaller ponds, take off directly from water or land without a runway, and breed even on the northernmost coast of Greenland.

Tessa and I had barely started our second day of driving the caribou transect together, when I spotted a suspicious bird on a puddle a mile or so south of Deadhorse. I zoomed all the way in and steadied my camera on the truck’s open window, snapping shots until the bird took off in a shower of water droplets. Eager to find caribou, we got going, too. It wasn’t until I loaded the photos onto my laptop that I noticed the loon’s red throat.

Look as we might on three more days of driving, I never caught sight of that red-throated loon again.

Maybe someday—while I’m out looking for gray-headed chickadees in Scandinavia, Russia, or northern Japan—I’ll be lucky enough to spot an Arctic loon as well. In the meantime, I was happy to return home in time to see the common loons on Lake Namakagon. My journey has ended, and their fall migration has begun.

Emily was in Alaska for the summer! She’s home now, but has more stories to tell. Follow the journey in this column, and see additional stories and photos on her blog: http://cablemuseum.org/connect/.