After my spectacular hike up to the Harding Ice Field in Kenai Fjords National Park, I wanted to do more than just look down onto the complex world of glacial ice from high above. Through a friend from Northland College, I discovered that Adventure 60 North, a guide service in Seward, runs sea kayak trips to the toe of a calving glacier.

I was glad for my brand-new, bright green rain jacket as I boarded a water taxi the next morning in the cold, steady drizzle I’ve come to expect from Alaska. Back at the Adventure 60 North shop, our guides, Sunny and Nick, had outfitted us with dry bags for our stuff, and supplied any other gear we didn’t already own. After two-and-a-half months in Alaska, I was well-prepared with the ubiquitous brown Xtratuf boots, rain pants, and my cheerfully green jacket.

The water taxi ride itself was spectacularly filled with sea otters, orcas, two kinds of puffins, rocky cliffs and crags, sea lions, a bristle-thighed curlew, hot coffee, and good conversation. I’ll probably write more about all that later! For now, let’s focus on how cool it felt to be paddling in a kayak among bobbing chunks of glacial ice.

We glided through the maze of mini-bergs for a while, having landed on the gravely beach of a glacial moraine about two miles from the current glacial terminus to switch from one type of boat to another. Neoprene pogies—which are little hand pockets that Velcro around the paddle shaft—kept our hands warm despite the ice water. About a half-mile from the glacier’s front we paused and floated, admiring the huge, pale-blue tongue of ice that reached down out of the clouds and into the sea. 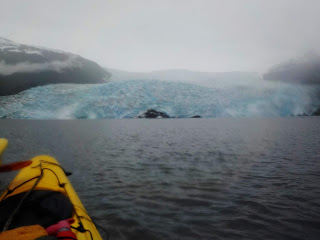 Suddenly, thunder rumbled. A little bubble of excitement rose up in my chest. I love thunderstorms, and I’ve missed them while in Alaska. This was even better. The ice itself was rumbling. We searched the blue cliff at the water’s edge for movement, but found none. The movement must have been farther up the glacier, or deep within. After a few moments, thunder rumbled again. This time we watched a chunk of ice tumble into the sea. A small white avalanche of crushed ice poured in behind it, and a wave spread out from the glacier. We gasped and cheered.

Glaciers are constantly moving, after all, that’s what makes them glaciers. During the hundreds of years that snow built up and compressed older snow beneath it, pressed out all the air bubbles, and caused the crystals to reform into dense ice, it wasn’t a glacier. Finally, when that huge mass of ice began to flow downhill or out toward its margins under its own weight, a glacier was born.

Aialik Glacier, the one we were scanning for action, moves forward two to four feet per day. Under pressure, ice can bend and flow. Near the glacier’s surface, however, the brittle ice must crack to accommodate the hidden topography below. A glacier’s speed is due to a combination of the ice’s thickness, the gradient of its valley, and the presence of water at its base. Add in the fact Aialik is a tidewater glacier that ends in warm, constantly fluctuating seawater, and you have a very dynamic system.

We studied the heavily crevassed surface of the glacier, and all made guesses about which section would go next. Sunny had explained that the spires of ice formed by intersecting crevasses were called seracs. Three out of the seven paddlers in our group pointed to the same, precarious-looking section. Minutes later, thunder rumbled and that heavily fractured serac splashed into the sea. After several minutes more, we bobbed on its wake.

Thunderous calving into the ocean was exciting, but I still wanted to get up close and personal with big icebergs. A few days later I filled the last spot on another kayak trip, this time with Anadyr Adventures in Valdez. This adventure skipped the water taxi and delivered us by van right to the shore of a little proglacial lake just outside of town. The Valdez Glacier had scoured a deep valley, dammed one end with a moraine, and melted back. Even though this lake wasn’t affected by tides like Aialik Glacier, water still lubricated turmoil at the toe.

We launched inflatable kayaks onto mirror-calm water in a dense fog. Huge icebergs loomed in the shallows. Someone made a joke about the Titanic, but that didn’t stop us from paddling up for a closer look. Most bergs were heaped with blankets and piles of wet, brown sediments, which indicated that they were floating upright, in the same orientation as when they’d been attached to the glacier. Where chunks had broken off to reveal their inner ice, though, the crystals were huge, sparkling, and made luminous patterns of white and blue.

Glacial ice is dense, with very little air. As light passes through it, the wavelengths of red and yellow light are absorbed, and blue light is scattered and reflected back to our eyes. The deeper the light penetrates into the ice, the more blue it appears. Snow and ice with more air among their crystals scatter light back from their surface.

A few bergs were pure white, at least from a distance. Those had rolled over, exposing their cleaner core of ice (which gains air as they melt, making them white instead of blue), and dumping their sediment load into the lake. Today, the ice dripped placidly, melting bit by bit. Our guide, though, has watched these behemoths split, roll over, and shatter. As I ran my hand along the smooth, wet side of one berg, I was grateful for the contrasting lack of thunder on this adventure.

After lunch, the fog burned off and revealed a brilliant blue sky. We scrambled up a canyon wall to get a better look at the glacier itself. The brown and white striped river of ice flowed from around a corner and into view. At the terminus lay a jumble of broken, dirty ice chunks, in the process of detaching fully into the lake. With bright sun illuminating everything, the lake seemed small; in the fog, we might have been on an endless sea.
Ever since I discovered how to read the glaciated landscape of Northern Minnesota and Wisconsin, I’ve been fascinated by these massive forces of nature. Admiring them from afar, seeing them up close, paddling among icebergs, touching their ice…glaciers are even more amazing than I’d expected…and I’m not done exploring them!