I've been doing a fair amount of solo hiking while in Alaska, which means that I'm in the habit of saying "hey bear!" loudly at regular intervals. I had thought about getting bear bells to attach to my pack, but I'm glad I didn't because the rangers here say that they don't work nearly as well as the human voice.

Earlier in the summer I was in Anchorage visiting a friend (Tom Doolittle—the first Naturalist hired by Lois Nestel at the Cable Natural History Museum). Mostly I was doing trip planning and homework, but I wanted to get some fresh air, too. Tom had been raving about the Upper Huffman Trailhead in Chugach State Park, on the hill just above town, so that's where I headed.

The parking lot was completely empty—a far cry from the nearby Flattop Trail I’d hiked earlier that had a herd of people on it.

I headed out on the trail. It was pretty wide and gravely, but tunneled through thick brush and shrubs. Tall grasses lined the trail, too. On some of the trees, I saw where moose had scraped the bark off during the winter. 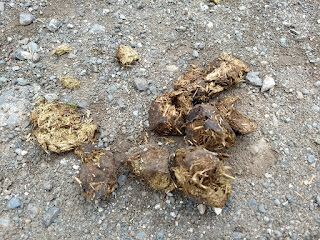 All the while I hiked through this, every 5-10 seconds, I called out "Hey Bear! Hey yo!"

Then, as I was passing through an area that felt a little more open because it was just tall grasses near the trail, I heard what sounded like a tree falling back in a little grove of mountain hemlocks. If I was in Iowa, the sound could only have been a rotten tree or branch finally giving way. However, I'm in Alaska. I yelled “Hey Bear” more loudly, and tried to peer into the grove to see what was causing the noise.

A cow moose burst out of the grove and galloped through the grass toward the trail I was hiking! Well, with moose you're supposed to run away. So I jogged a few steps back the way I came. Luckily she angled away from me and disappeared around the corner to the left at a T-intersection up ahead.

Few! That was a little close for comfort!

Now I had to decide what to do. I wanted to hike another couple miles. I figured that if she turned left at the T, I could probably turn right at the T and be ok. Before I could walk more than a few steps in that direction, the grass rustled again.

This time a BROWN BEAR burst out of the bushes! I started to grab for my bear spray, but he was loping away from me, following the exact path of the moose. He looked over his shoulder at me as I said “HEY BEAR” even louder (and maybe a little more shakily) than before, but he kept on going and disappeared around the corner. I stopped reaching for my bear spray, and grabbed my cell phone camera instead. I just had time to snap one quick photo. 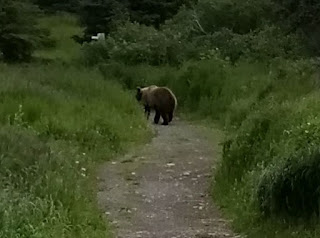 It took me more than a month in Alaska to see a bear, and this was a pretty exciting encounter.

It was a little too exciting for a solo hike, though. I turned around, went back to my car, and drove to a different trailhead. I was heartened because there were two other cars in the pull-off. I wouldn't be alone out there.

This gravel trail was even wider, although the same thick brush closed in on both sides. “Hey Bear!” I was hiking up a slight hill, and pretty soon a group of six women and three dogs came hiking down the trail toward me. A bear would have no trouble hearing them! Heartened even more, I kept going.

Then I came to an intersection. The SAME intersection where I had seen the bear and the moose disappear around the corner. I (and the ladies) had unknowingly hiked up the same trail the bear and moose had just run down. “Hey Bear!” It probably would have been fine to keep hiking, but the scenery among all those shrubs just didn't feel worth it anymore. Not by myself. “Hey Bear!” I was tempted to run after the group of friends and ask to tag along.

Instead, I just turned around and “Hey Bear!” started hiking back to my car. “Hey Bear!”

Halfway back, I heard some hollow thuds in the brush, like something heavy on airy ground. “Hey Bear!” Then I saw a huge rack of antlers above the first row of shrubs. “Hey Moose!” My heart started racing again! Moose aren't predators, but they are said to be nearsighted, easily spooked, and need a wide personal bubble. They are also huge. “Hey Moose!” 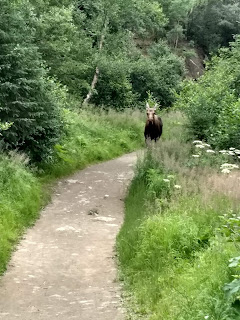 He ran off diagonally across the trail between me and my car and disappeared surprisingly easily into the brush. “Hey Moose!”

I waited a minute, then cautiously walked to where he had crossed the trail. There was a definite path into the brush, and also heavily moose-browsed shrubs sticking up out of the grass. “Hey Bear!”

Once back at my car, I decided to return to the busy Flattop Trailhead and hike among humans for a few miles. I ended up having a fun chat with two girls from California—one is a teacher on summer break, the other is taking a leave of absence from her job. They were super excited about my recent wildlife sightings. Now that I was safe and with others, I was, too.