The still air was heavy with moisture as I hiked up the Harding Icefield Trail in Kenai Fjords National Park outside Seward, Alaska. Dense clouds hung low, and fingers of fog crept up the valleys. It was typical weather for a temperate rainforest, I kept reminding myself, but gloomy all the same.

As a family of hikers containing three generations picked their way up one of the many sets of rock stairs ahead of me, I used the delay to look around. In a patch of vibrant fuchsia fireweed flowers, dewdrops clung to pink-and-white swirled pistils. Their delicate beauty was just as rewarding as a spectacular vista would have been. 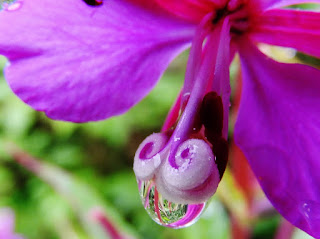 My focus stayed close as I gained elevation. Above tree line the meadows were overflowing with rainbows of flowers, and smallish bumblebees—the workers—buzzed drunkenly from one blossom to the next. A brown bear and her two cubs wallowed in the flowers maybe 30 yards up from the trail. While the kids ran higher up to the scree slope, she paid hikers no mind and focused all of her attention on eating the lush growth. 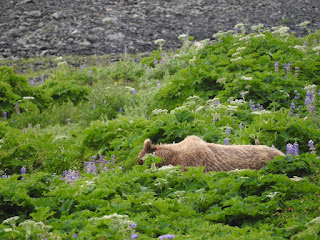 At a place called Marmot Meadows, I waded through lush growth that threatened to hide a side trail, and popped out on a rock overlooking the ice-filled valley of Exit Glacier. At my feet the shale was smoothed and rounded; its surface hash-marked with glacial striations. The bottom of a glacier is essentially a giant piece of sandpaper with rocks of all sizes frozen into the matrix. Glaciers have the power to polish bedrock as the ice slides and grinds its way downhill.

Looking out from the striations at my feet, I peered over the edge and many yards down a steep scree slope to where the wrinkled, cracked, striped, and dirty ice now flowed. How long since it had covered this overlook? How long since blue ice had bloomed on these meadows instead of flowers?

Looking up through wisps of fog, I stared at the top of the glacier where it seemed to emanate from a bright spot in the sky like a prehistoric tongue. That’s where I was headed. Up there, just out of sight, sprawled the Harding Icefield.

Cresting the final ridge of bedrock and loose debris, I wasn’t sure what to expect. The trail had contoured along a hillside of tundra festooned with the nodding white flowers of bell heather. I’d learned to identify those same flowers weeks ago at a lower elevation.  Gaining even more altitude, I slipped and slid through soggy old snow patches tinged with pink algae and across damp hillsides of loose rock. A sure-footed mountain goat and her kid disappeared over a bedrock cliff. Marmots whistled from their lookout rocks.  Dense clouds hung low, and the air was full of moisture, so the view from the top of the trail mostly contained an expanse of gray sky over gray snow, with a soft white light dividing them. Despite the dim light and reduced visibility, it was easy to feel small here on the edge of the largest icefield entirely contained within the United States. 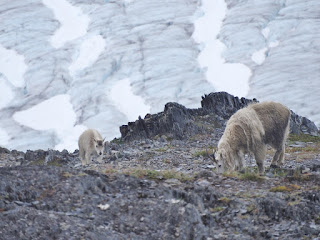 The ocean provides this region with plentiful moisture in both summer and winter. Current annual snowfall totals are somewhere around 60 feet. As the weight of new snow compresses the old, the air is forced out, ice crystals grow, and it becomes more dense. The process of squeezing air out of snow changes its color from white to blue. When enough ice has accumulated, it begins to spread from the center and flow downhill under its own weight. A glacier is born. This 300 square-mile Harding Ice Field covers a mountain range under ice several thousand feet thick, and flows out into 38 glaciers.

With a mixture of longing and trepidation I studied the patterns of crevasses that wrinkled the surface of Exit Glacier as it poured off the main mass and down its valley. Wouldn’t it be exciting to explore that fractured surface? Those features are born of the glacier’s continuous advance. As the mass maneuvers around corners and over obstructions, the surface of the ice must stretch wider. When the ice stretches past its stress limit, crevasses crack open.

Movement is part of the definition of a glacier, and yet I was surprised to learn that this one is traveling down the valley at about two feet per day. That seems fast for something that appears solid and lumbering. Even so, its terminus is melting faster. The furthest extent of its ice has retreated more than 1.25 miles since it was first mapped in 1815. In fact, all Alaskan glaciers below about 4,905 feet in elevation are melting.

As the toe of Exit Glacier retreats up its valley, the National Park Service has tried to keep up by building longer trails and new overlooks to retain the easy access this glacier is famous for. They’ve reached a stopping point, though, where steep cliffs prevent further access from below. Future views may require everyone to pick their way up steep stone staircases just like the intergenerational family I passed earlier. Will fewer individuals be able to make it?

We could ask the same question about the bears, and mountain goats, and flowers. They might not need the ice, exactly, but they have adapted to certain habitats and climatic conditions. Rapid change isn’t just coming, it’s already here. With that thought on my mind, the clouds finally coalesced into rain, and we all made our way downhill.