Hard Crust on the Snow Moon

Getting over the ridge of icy snow left by the plow was my first challenge. I watched a couple of my companions try it, then picked my line and sidestepped up. The ridge only came up to my shoulder, but I still got a thrill out of choosing my own way to enter the woods instead of sticking to the hiking trail at the opposite end of the parking area. Although still within sight of the road, a sense of adventure crackled among the group. Reaching the crest, I aimed my skis at an open line through the forest and gave a good push with my poles.

Pure white snowdrifts graciously supported my skis as I swooped down the smooth, undulating slope. The close hug of trees gave both a sense of intimacy and speed that’s hard to find on the wide, groomed ski trails I’ve been frequenting all winter. 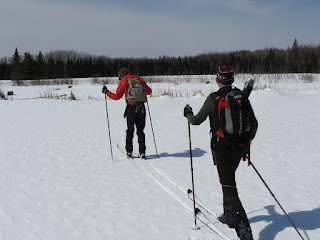 This is a magical time of year. Oh, I know, most people are yearning for spring, shaking their fists at each new Winter Storm Watch, and eyeing their summer clothes wistfully. There’s a small part of me doing those things, too. Then I start looking at maps for new places to explore. In the Ojibwa calendar, the full moon in March is named “Hard Crust on the Snow Moon,” and for good reason. This firm crust paves a smooth route in to swamps, bogs, and all the most unwalkable, unpaddleable, unreachable parts of our landscape. A journey that might require hip waders, a canoe, hiking boots, head net, and bug spray in summer is now perfectly suited for cross country skis. The ticks are covered and the mosquitoes are hiding. Now is the time for grand adventures. 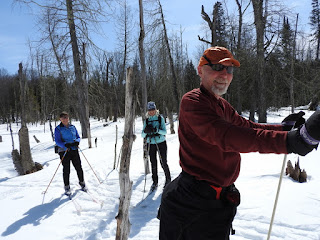 It’s taken all winter for the world to be thus transformed. The process began with the tumbling path of each lacey snowflake. Frail points were broken off, water molecules reorganized, and a rounded ice grain emerged. Swirling winds facilitated the process. Burial under more snow compressed underlying kernels. As the snowpack settled, individual grains fused to their neighbors and squeezed out air pockets. The once-fluffy snow increased in strength and density.

Inside the snowpack, sublimation (the conversion of ice directly to water vapor) filled any remaining pore spaces with 100 percent humidity. Water vapor rose upward—partly driven by the temperature gradient between relatively warm earth below, and colder air above. When it reached cooler spaces nearer the surface, water vapor condensed back into ice. This lowered the concentration of water vapor near the surface of the snowand pulled more vapor upward from below.

As a result of this upward migration, ice crystals near the ground shrunk, and a complex network of airspaces and tunnels formed in the subnivean zone. Mice, voles, weasels, spiders, ticks, fungi, bacteria, and other critters thrive in this unseen world. Higher in the snowpack—which also means closer to frigid air temperatures—condensing water vapor locked ice crystals together even more securely.

For several weeks now, spring sunshine and warm days have altered and compacted the once-fluffy snowpack even more, while cold nights have re-solidified it into a firm structure that can easily support the weight of an adult human.

The day of our adventure was a perfect example. The thermometer read one degree above zero when we got out of bed. The official weather station in Hayward, Wisconsin, recorded a nighttime low of two below zero, which set a new record for the eighth of April. A year ago on this day we set a record high temperature of 73 degrees, and I wrote about yellow-rumped warblers, loons, emerging plants, and one loudly calling spring peeper in my phenology journal.

Hardly even a chickadee stirred on that record-cold morning, but we were looking for bigger birds this year. Our guide had happened upon a heron rookery on a previous excursion, and now we set out to discover it again. The crust paved our way through a string of bogs, beaver ponds, and thickets of hazel and alder brush. The joyful, sliding tracks of otters etched designs across every surface. They must love this season, too. Finally, we skied switchbacks through the trees down into a wide basin. The weathered trunks of a ghost forest—drowned by a beaver dam, no doubt—etched gnarled silhouettes on the bluebird sky. This was it, proclaimed our guide, as we skimmed over sparkling drifts toward the other end. 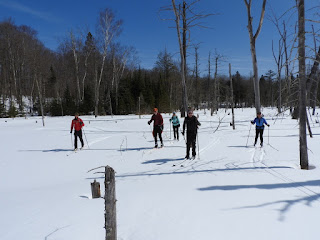 We counted 21 twiggy nests perched in the tops and crooks of those contorted old trees. As hunters, great blue herons are solitary; masters of invisibility as they stand or stalk silently through the shallows. But great blue herons are gregarious nesters, and seek safety in numbers. Their raucous colonies average over one hundred nests, with four times that many eyes watching for danger. 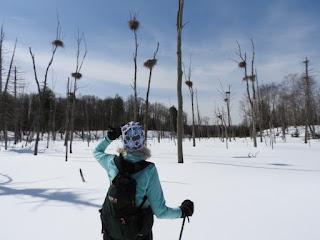 The rookery was empty and silent today, though. The open water that surrounds the trees like a moat to protect them from mammalian predators was frozen solid, and bobcat tracks stitched lines across the drifts. It’s no accident that the herons chose a remote location with difficult access. They don’t respond well to human disturbance. By the time lakes open and the owners of these nests return, the landscape will be an almost impenetrable jungle of brush, mud, soggy bogs, and open water. Once the beaver pond thaws, we certainly wouldn’t be able to stand directly beneath the nests and gaze up—mouths open—at the Dr. Seuss-like structures above. Just for this one magical season is this particular adventure possible. It’s a lovely pause on the bigger journey that will inevitably, eventually, become spring. 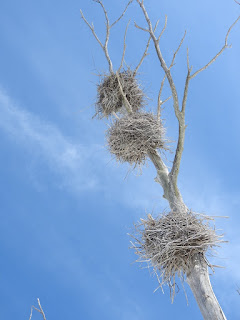 For 50 years, the Cable Natural History Museum has served to connect you to the Northwoods. Come visit us in Cable, WI! Our new exhibit: “Bee Amazed!” opens on May 1, 2018.
Posted by Emily M. Stone at 5:00 AM