A Rainbow of Bees

It’s been a long, snowy winter, but when a rainbow of bees invaded the Museum yesterday it started to feel a little bit like spring!  The bees aren’t living of course; they are larger-than-life photographs that make our exhibit hall feel alive. We owe big thanks to Sam Droege at the USGS Native Bee Inventory and Monitoring Lab who has taken all of these photos and made them available to the public.

My favorite portrait is a close-up of a metallic green sweat bee. Her iridescent green head fills the canvas, and all five of her eyes (two big and three small) seem to stare right at you. A halo of golden-brown hair bristles expectantly on what you can see of her chin, back, and legs, as if waiting for a dusting of pollen to land. Some of my coworkers and volunteers have expressed a little aversion to this unusual view of a bee, but I’m captivated by shimmering shades of green. Its scientific name (Augochlorella aurata), means small, green, and gilded. Perfect.

We chose six native bees to highlight in our upcoming “Bee Amazed” exhibit, and they are equally fascinating in their own ways. The fuzzy-legged leafcutter bee lives up to its name because even males of that species have hairy legs. Megachile melanophea uses his furry appendages to cover the eyes of a female while they are mating. Scientists aren’t sure why, but I suspect the hairs may carry pheromones that make her feel more romantic. Male bees typically don’t have pollen-gathering hairs on their legs because they don’t need to gather pollen to provision a nest.

Have you ever encountered a fuzzy orange teddy bear? That’s what the orange-belted bumble bee reminds me of. The plump, thickly furred bodies of bumble bees allow them to retain heat better than smaller smoother bees. Last week I wrote about bumble bees detaching their flight muscles and vibrating in order to shake the pollen out of certain flowers. In a similar process, bumble bees can use their unhinged muscles to shiver and warm up. With the ability to produce and retain heat, bumble bees are the champion pollinators of early spring and cool morning pollinations. 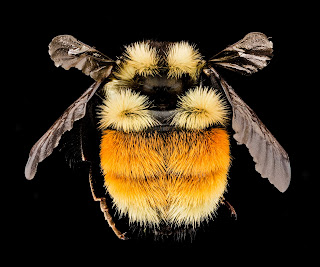 Right now the new bumble bee queens—fertilized last fall—are tucked away in the subnivean zone waiting for the snow to melt. When they emerge in the spring, the queens are on their own for at least 5 weeks, until the eggs they lay become their hardworking colony. Our native bumble bees tend to house their colonies in abandoned mouse nests or other underground burrows. The burrows are sheltered from the weather and pre-insulated with grass, thistle-down, and mouse fur.

In a corner of the exhibit hall we’ve built a human-scale bumble bee nest. Numerous “bee pods” (as we affectionately named them as they were being built in our office area) hold bee eggs, larvae, honey, and pollen. We’ve already confirmed that kids love helping the bumble bee queen move resources around in her nest.

Many other types of native bees are solitary and don’t form colonies at all, and their nesting styles are also illustrated nearby.

If green and orange seem like odd colors for bees, our giant photo of the blue orchard mason bee will be an even bigger surprise. Bees can be blue? Well, they’re blue as much as a bluebird or a blue jay is blue, which means only in certain light. Their base color is brown, but the structures of their cells cause light to bounce around and return to our eyes in shimmering shades of cobalt. Like the metallic green sweat bee, a halo of brown hairs stand ready to gather pollen. 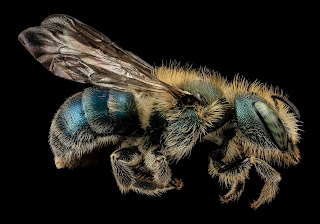 The hairy-banded mining bee in the photo next-door must have already been out foraging. Tiny grains of pollen stick to its fuzzy face and shoulders like a sprinkling of fairy dust. What this photo doesn’t show is that the main work of pollen collecting for bees in this genus—Andrena—Is actually done by hairs positioned high on their hind legs, giving the impression that the pollen is in their armpits. This species of mining bee develops underground all summer, and only emerges in mid-August when their favorite flowers—black-eyed Susans, coreopsis, goldenrod, and other members of the Aster family—bloom.

The final glamour shot of our six chosen bees is of the two-spotted longhorn bee. The longhorn in its name derives from long antennas, and it does have two spots on the tip of its abdomen. Photographed in profile, this dark brown and black bee looks almost like a new alien species of a galloping horse. What endears me to this bee isn’t its appearance, but the fact that it’s an important pollinator of pumpkins, watermelons, and cucumbers.

Spring is coming! I hope you’ll visit our new exhibit “Bee Amazed!” at the Cable Natural History Museum after it opens on May 1. I know you’ll be amazed by the beauty and diversity of our native bees.

For 50 years, the Cable Natural History Museum has served to connect you to the Northwoods. Come visit us in Cable, WI! Our new exhibit: “Bee Amazed!” opens on May 1, 2018.