Thick snow crunched and squished underfoot, soft snow plopped down from bent branches, and giggles echoed through the forest as a group of friends hiked through the winter woods. I reveled in the beauty of the landscape transformed by winter. Spindly sapling trees—ones that we’d look right past in the summer—were sculpted into graceful arches by the heavy snow and formed countless cathedral doorways in the woods. In a meditation on humility, flexible fir trees calmly let their branches droop under the piles of fluffy frosting. A quick tap from a hiking pole would send a shower of snow down onto the trail, and the bent tree would spring upward just enough for us to pass underneath. 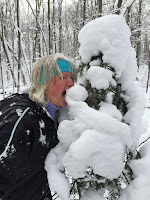 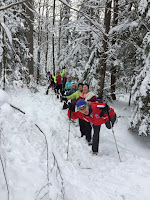 I was at the front of the line when I heard my name called. “Oh Emily…we need you!” I turned to look. “What is this tree with the beautifully ridged bark?” It’s such a nice feeling to be needed for my naturalist skills. With my eyes I followed the trunk upward into the forest canopy. Stout, sturdy twigs showed up against the bright gray clouds. Like an army of literal stick figures, each twig sported pairs of smaller twig “arms” raised to the sky. “It’s an ash tree.” I called back, finding satisfaction in the ease with which I could give the answer.

I love winter. The lack of ticks and mosquitoes, the cooler temperatures, the soft caress of freshly groomed tracks beneath my skis, the cozy warmth of my favorite puffy coat and the instant calm inside its hood drawn against the wind. The smell of wood smoke, and the camaraderie between those in our smaller, tougher community, all provide comfort in this challenging season. 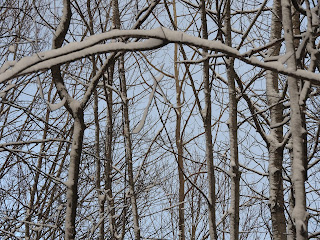 As a naturalist, I also feel a sort of comfort in the simplicity of the bare twigs on trees and shrubs, uncluttered by fluttering leaves or ephemeral flower stems. My first formal botany class was focused on learning 85 species of woody plants by their buds and winter twigs, and I’m still most confident in identifying trees and shrubs by their twigs and bark instead of their leaves. Leaves can change shape from the bottom of the tree to the top, from sun to shade, and many different species have maddeningly similar shapes. Twigs, however, are much more consistent. If you know which patterns and characters to look for, discerning the identity of a twig is only a matter of looking closely.

I enjoy teaching others to see those patterns too, and I’ve found my enthusiasm to be contagious during a slide show I call “The ABC’s of Winter Tree ID.” The “A,” the place we start, is Arrangement: the arrangement of leaves and twigs (or the buds that will become them,) along a stem. Most woody plants have alternately arranged leaves. This means that just one leaf can be found attached at any given point along a stem, and the leaves usually alternate sides. In contrast, many conifer trees have several twigs that diverge from a particular node. This whorled arrangement gives fir trees their distinctive layered look, especially when young. The ash tree I identified on the hike exhibited opposite arrangement. Two leaves or two twigs are attached at the same node on opposite sides of the stem. 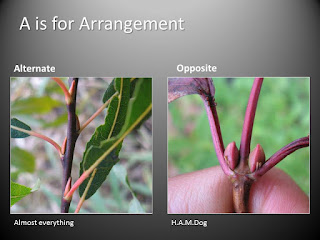 When identifying trees and shrubs in the Northwoods, finding an oppositely arranged species is useful because it narrows down your choices quickly. Of the trees, maples and ashes are the only opposite ones. When you include shrubs, you find dogwood, honeysuckle, and viburnum also follow that pattern. 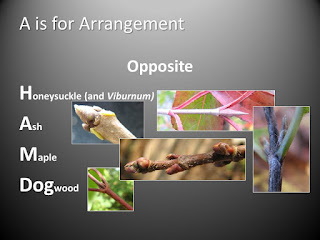 Or so I thought until my friend sent me an email with the subject “mystery plant.” The attached photo showed a straight, slender twig, with a smattering of little white lenticels in the reddish bark, and alternate, reddish buds flattened against the stem. Each bud had three rounded bud scales with lighter edging, and was subtended by a U-shaped leaf scar with three bundle scars from where veins had once carried water to the leaf petiole.


It didn’t fit any of the identification keys in my head. It didn’t fit any species in the technical botany manual. With a few more questions I discovered that my friend had found it growing in a swampy area, and that its bark peeled in big vertical strips. All the characters lit up the part of my brain that said “silver maple;” all except for the alternate arrangement. Maples should be opposite! Try as I might, though, I couldn’t find another name that worked.

As it turns out, it was a twig from a silver maple. Specifically, it was a fast-growing shoot that had popped out of the base of the trunk of a mature tree. I showed the photo to another botanist, and she said that she sees it occasionally. The occurrence of buds along a twig is determined by the presence or absence of the growth hormone auxin. Perhaps this twig was growing so fast that the messages became jumbled. It’s not common, but also not unheard of.

Nature has a way of asserting its independence. The rules we formulate about it are purely descriptive and useful only to us humans as we try to understand the world. Even with that uncertainty, the lacy patterns of twigs twisting through a winter sunset are no less beautiful.