The tunnel of shady conifers felt bitterly cold as I huffed uphill on my fat bike. Our wide tires crackled and popped over brittle leaf litter, sticks, and ice columns pushing up through the once-damp soil. Sunshine beckoned up ahead, though, and as I burst into the open field at the top of the hill I could feel the rays warming my legs right through thick tights.

We’d hoped to participate in a post-Thanksgiving “Pie Burner” group fat bike ride in a neighboring town, but icy conditions there deterred us. Instead, we’d come to Tioga Pit, a reclaimed iron mine near Cohasset, MN. From 1955 to 1961, the Tioga No. 2 mine shipped more than 3 million tons of iron ore. That 3-million-ton hole is now a deep blue fishing lake.

Rolling hills surrounding the pit have grown back into a mix of conifer forests, scraggly young hardwoods, and brushy fields punctuated with spindles of aspen and birch. While the forests weren’t particularly beautiful, they were interesting. Along one old roadbed, a series of half a dozen big old truck tires reminded us of this area’s industrial past. In a reversed game of giant ring-toss, the smooth trunk of a living hardwood tree grew up through the center of almost every tire. 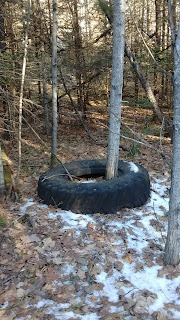 In a nearby field, several two-foot-tall conical mounds up to six feet in diameter dotted the open areas. I knew that the mounds must just be anthills, but those were some huge anthills! Channeling my inner kid, I gave in to the intense urge to go poke one with a stick…in the name of science, of course. My stick only scraped evergreen needles off the surface of the solidly frozen pile. No ants appeared to investigate my invasion. I hopped back on my bike and settled for exclaiming about the string of such mounds lined up along the trail. 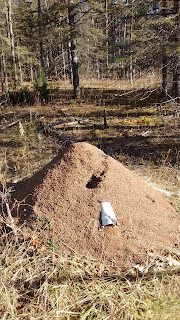 Back home, I was hoping Google could help me figure out what I’d seen. My search for “giant ant hills in Minnesota” quickly turned up a discussion thread with some good leads. I narrowed my suspects down to two species in the genus Formica. No, they are not related to Formica® Laminate Countertops. The word “formic” comes from the Latin word for ant. Formic acid, the ants’ chemical defense system, also derives its name from ants. Formica is the largest genus in North American and contains almost one-sixth of all Nearctic species of ants.

In particular, both Formica exsectoides, and Formica obscuripes build big mounds and could live in this area. According to a Minnesota ants database hosted by Carleton College, F. exsectoides has been found in Itasca County (where I was), but F. obscuripes has not. Ants are notoriously diverse and understudied, so the database might be incomplete.

Also known as Allegheny mound ants, most of the range of F. exsectoides is centered farther east. Their nest mounds, constructed primarily of sand and soil, have been measured at 2.5 feet high and 9.5 feet in diameter. Several mounds may be interconnected, and tunnels may extend three feet into the ground. Multiple queens produce vast numbers of workers (one colony was estimated at 237,000 workers and 1400 queens), and the larvae develop under ideal temperatures and humidity levels maintained by the mound structure.

Like most colonial insects, F. exsectoides will defend their nests. Their bites aren’t very painful, but after breaking the skin, an ant may then curl its abdomen beneath her body and squirt the cut with formic acid. That stings. In another example of their ferocity, these ants have the infamous habit of decapitating rival ants. Their strength also comes in handy when they are preying on spiders and flies. On a gentler note, most of F. exsectoides’ calories come from honeydew, a sugary liquid they get from aphids, whom they also protect from predators. 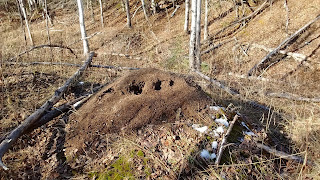 The other possible architect of these mounds—Formica obscuripes—also farms aphids for honeydew, as well as foraging for dead or dying insects and spiders. On the other hand, beetles, springtails, true bugs, and flies are known to carve out their own living spaces in the hills of F. obscuripes. Maybe they occasionally become dinner as well?

In any case, the mounds of F. obscuripes make a good short-term rental because they are constructed primarily out of fragments of plant materials called thatch. Once again, the mounds regulate temperature and humidity. When I asked local entomologist Larry Weber about the mounds, he commented that “I have seen these at Jay Cooke State Park and I've noticed that the needles seem to be a sort of solar panel. The snow melts on these mounds before it does around them. Plan another bike ride there in March and you may see the same thing.” I think I will! Also, I’d like to go back when I can dig a little deeper and find out if the thatch was just on the surface, or all the way through.

Like with F. exsectoides, multiple F. obscuripes queens create droves of workers (averaging 19,000 for a large colony). When things get crowded, mated queens plus some workers leave the nest to start a new one in a process called budding. This may explain why the mounds were grouped along the trail. Sometimes the queen will just take over the nest of another ant species, in an act called social parasitism. The old queen is driven off, and the host workers help raise the invaders until their month-long lifespans end.

While many worker ants don’t live much longer than a month and a half, some survive the entire winter. In fall, ants synthesize glycerol antifreeze and head to the lowest levels of their tunnels where temperatures stay near 50 degrees Fahrenheit. There they can hibernate without freezing. The big mound on the surface acts as both an insulator and a solar panel to help protect the ants below.

Sometimes in the darkest, coldest days of winter, hibernation seems like a pleasant option. On a sunny day, though, I’d rather be zipping around on my bike, soaking up warmth through my tights, and discovering something new.