The gleaming white magic of a winter wonderland enticed me outside after breakfast. With our first snow on the ground, the air tasted fresher, the brisk cold nipped my cheeks awake, and the world felt new.

Above me stretched a lacework of light and shadow against the widening blue. All around me, the thin layer of sticky snow created lush patterns on the forest floor. Pebbles in the driveway, twigs on the ground, and ferns leaning over became works of modern art under their crust of white. Christmas tree-sized balsam firs hugged their snow-laden branches close.  In the understory, mini trees did the same. 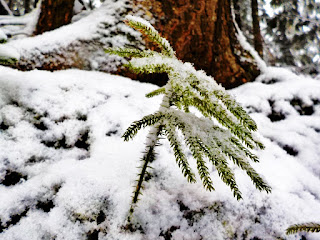 Only those mini trees aren’t really trees, at least not anymore. You might know them as ground pine, prince's pine, or club moss. If you’re botanical, you might even know them by their genus Lycopodium (Greek for little wolf foot). None of those names are entirely accurate, though. These definitely aren’t pines, or mosses (or wolves!), and new DNA studies have made the scientific classification more complicated, too.

Lycopodiums are beautiful and amazing, though, and harken back to the Devonian and Carboniferous Periods more than 300 million years ago. At that time, North America was part of the supercontinent Pangea, and the eastern United States was positioned near the equator. Beautiful plants, gigantic insects, and strange forests covered the land. Increased precipitation, carbon dioxide, and oxygen created a very different world than we know today.

The tropical climate produced extensive swamps dominated by tree-like or “arborescent” lycopsids that diverged from a common ancestor of our present-day clubmosses. These were some of the first plants to grow secondary tissue (wood), which was needed to support their impressive heights of 50 meters (164 feet). That is taller than the tallest white pines currently growing in Minnesota or Wisconsin.

What’s crazy is that they couldn’t increase their girth along with their height. Each tree had to begin its life by growing its trunk as wide as it would ever be. The thick stump grew upward into a pole of the same diameter. Leaves – also known as microphylls because they only have a single vein down the center – grew along the trunk. With only the single vein, though, they had no way to transport the sugars produced by photosynthesis. As the tree gained height, the lower leaves fell off (creating a distinctive pattern on the trunk, and earning them the nickname “scale trees”), and the lower trunk essentially became dead tissue. At some predetermined height, the tree branched a certain number of times, reproduced, and died.

With such a “quick and cheap” lifestyle, the arborescent lycopsids both grew and died rapidly. This allowed them to dominate habitats following short-term disturbances (like frequent fires), and leave behind a tremendous amount of woody debris in those tropical swamps. The bountiful organic matter in those swamps was eventually buried and turned into coal.

When I first wrote about lycopsids two years ago, I read and glommed onto a fascinating theory about why the fallen tree didn’t decompose. Scientists speculated that the fungi and bacteria of the time had not yet developed the ability to decompose the tough, brown lignin found in wood. I loved this story, and told it often during nature hikes and programs.

Just this fall, as I was following up on research done by Matt Nelsen (the lichenologist who showed me pin lichens at the mushroom foray), I discovered that he’d written a paper titled “Delayed fungal evolution did not cause the Paleozoic peak in coal production.” He and his colleagues had found multiple lines of evidence that not only were there microbes around during the Carboniferous that could digest lignin; they also showed that lignin wasn’t as important in lycopsid trees as we’d originally thought. Those early plants had bark made of a substance without any modern equivalent.

So why did our vast beds of coal form? Nelsen thinks that the plants were growing and dying so quickly that the process of decay couldn’t keep up, and geologic forces related to the formation of the supercontinent Pangea caused the log-filled swamps to be buried quickly. This story isn’t quite as cool as the original, but scientists don’t get to consider things like that. When evidence contradicts what we think, we change with the times.

The story we’re left with is far from boring, though. The unique conditions present during the Carboniferous Period may never be repeated on Earth. As carbon in the air became locked up in coal deposits, in the explosion of land plants, and in limestone beds under the ocean, the conditions no longer supported giant lycopsids. They shrank into diminutive quillworts, while their cousins became the clubmoss we know today. Complex plants with seeds, extensive vascular systems, and trunks that could grow out as well as up succeeded instead.

The branches of this new forest closed in over my head as I appreciated the beauty of our current non-tropical weather. Tiny, snow-capped lycopods dotted the understory landscape—their diminutive size hiding an immense history and adding to the magic of the forest. Nature is surprisingly old and always new.

Editor’s Note: Portions of this article were originally published in 2015.