Columnar Jointing: Something familiar in a far-off place

It was late in the afternoon by the time we’d completed the scenic drive through Yosemite National Park. We’d been distracted by the looming face of Half Dome, panoramic views, lunch by a sparkling stream, neon green wolf lichens, and the sweet, butterscotch scent of sun-warmed ponderosa pine bark. My cousin Heather and I had already visited Yosemite on previous trips (separately), though, so we pushed eastward toward a new destination.


During an Introduction to Geology course back in my days at Northland College, I’d seen a photo of a landform known as Devils Postpile in our textbook. The image of huge bedrock “logs” all stacked together captured my imagination just as it had captured the imaginations of John Muir and President William Howard Taft. Taft designated it as Devils Postpile National Monument in 1911, under the recently created Antiquities Act.

Nestled deep in a valley in the eastern Sierras near Mammoth Lakes, California, this unit of the National Park Service has a very short season. Even though the summer shuttle into the monument had ceased to run, and no ranger in a flat hat stood in the boarded up fee station, the narrow, winding entrance road would be open until October 31, or until snow made it impassable.

No snow was in the forecast as we hiked in tank tops toward the Postpile. We had perfect timing. Late afternoon sun streamed through the trees and illuminated the unusual rock formation. 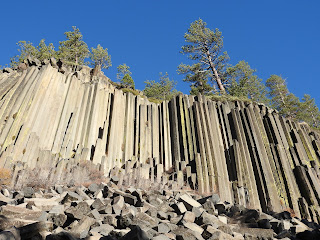 The Devils Postpile is a striking example of something called columnar jointing. It occurs during the cooling process of lava, especially down within the lava flow or when the lava is intruded into other rocks. Most materials take up more space when they’re hot, so as the surface of the lava flow begins to cool, the material contracts. To relieve the strain of this change, the rock fractures. The amazing thing is that the contraction occurs at centers which are evenly spaced throughout the rock and forms hexagons. As the lava continues to cool, the joints get pulled down into the mass of rock, and we end up with these tall, tightly packed, hexagonal columns.

Heather and I admired the angular wall, its striped shadows, and the wash of lovely green lichens. We also scrambled around at the edge of the scree field beneath the cliff, on a search for the most perfect hexagonal chunk of rock in the heap of rubble. 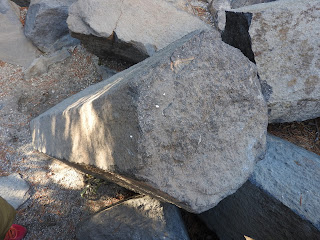 The columns formed within a lake of lava caught behind the dam of a glacial moraine about 82,000 years ago, and have been brought to the surface by years of weathering from more recent glaciers and a nearby river. The erosion continues, and one by one, the columns detach from the wall and tumble down. Near a similar formation on one of the Hawaiian Islands, people have used broken hexagonal columns in place of logs to build roads and bridges.

Although I was thrilled to witness firsthand the textbook images of Devils Postpile, I was even more enamored when we followed a trail up to the top of the formation. While glaciers were excavating this cliff, the sand and rocks locked in the base of the ice acted like sandpaper and polished the newly-exposed surface of the lava bed. Thousands of years later, a setting sun glinted off the smooth rock surface inscribed with a striking pattern of hexagons. Heather, a chemist, couldn’t help but ponder the chemical properties at work in the rock. And I, having just started the planning process for our next exhibit about bees, couldn’t help thinking that this looked like a giant stone honeycomb. 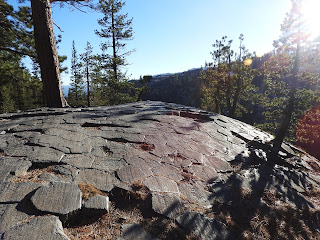 Hexagons are an excellent shape if you’re interested in having the greatest volume, with the shortest possible perimeter, and no gaps in between. These properties make hexagonal jointing an efficient way for the lava to release stress as it cools. They also make the hexagon an efficient shape for storing honey. Instead of being a product of cooling, though, the bees’ hexagons are a product of warming. As many worker bees simultaneously use wax to form little round storage pots in the hive, the honeycomb starts off as a series of closely-packed circles. The next step for bees is to heat those wax circles until the wax flows together. The closely packed circles flatten into each other and astonishingly precise hexagons appear.

Hexagons appear all over nature. The scutes of turtles’ shells, snowflakes, and the crystal structures of some minerals all use this efficient shape.

Columnar jointed rocks like the ones in the Devils Postpile aren’t uncommon, either. The striking waterfalls of Gooseberry Falls State Park in Minnesota have cut into thick layers of 1.1 billion-year-old columnar jointed basalt. Many roadcuts along Highway 61 up the North Shore of Lake Superior exhibit this fracture pattern, too. Devils Tower in Wyoming is a huge example. Columnar jointing captures the imaginations of people around the globe.

I’ve circled the base of Devils Tower. I’ve written assignments about the patterns in Gooseberry Falls. I’ve driven up the North Shore countless times. So it wasn’t the novelty of the Devils Postpile that drew me there, but the sense of connection I feel when I encounter something familiar in a far-off place.