The sun rose slowly on its long, midsummer track across the sky as we sped west on Interstate 90 in South Dakota. Lush forests, veiled by early morning humidity, fell away to cornfields with scattered, shady farmyards. At first the corn was thigh high; the ample rains and early spring allowing it to race past the folk wisdom of “knee high by the 4th of July.” Then, like going back in time, the corn shrank below the knee-high goal and ended up at ankle high before petering out into short-grass prairie with fewer and fewer scattered trees.

The humidity in the air also disappeared, and despite the vastness of our view over endless rolling hills, the horizon remained sharp. And on that horizon was a small mountain range with its tree cover so dark that from a distance the hills looked black. We’d arrived at the Black Hills.

Suddenly, we were back among trees again, although dry ponderosa pine woodlands had mostly replaced the lush deciduous forests. Thickets of willows huddled along creek ravines, with birch, cottonwood, and bur oak providing a haven for birds.  The Black Hills—rising like an oasis out of the prairie—are a biological mixing place, with species from regions to the east, west, north, and south.

Swooping upward on a series of switchbacks, we arrived at Sylvan Lake in Custer State Park. Trading sandals for hiking boots, and topping off our water supply, we struck out on Trail #9 to Black Elk Peak (formerly Harney Peak), the highest summit in the United States east of the Rocky Mountains.

The first section of trail was all a gradual climb. Afternoon sun glittered on shards of mica in the trail dust. Finally, we began contouring around a ravine, and the trail became flat and shady. The respite from blazing sun and summer heat was welcome. And we weren’t the only ones appreciating the Northwoods-like microclimate of this north facing cul-de-sac. A lush carpet of plants and flowers perched near eye level on the hillside.

I’d been stumped when trying to identify many of the dryland plants we’d seen elsewhere in the hills, but here I was among friends. Wild sarsaparilla spread it compound leaves over little starbursts of white flowers. Bunchberry was in full bloom, with its pure white bracts (the showy part of the flower is not even its petals; its big bracts surround a cluster of tiny flowers) glowing in the shade. And from thick carpets of dollhouse-sized trailing vines, the pink, paired blossoms of twinflower gave the forest floor a Lilliputian look. 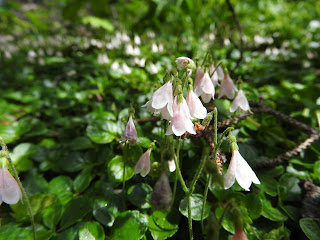 These little bell-like flowers exist under the radar of most hikers. They don’t look like much from five feet up. But they did catch the attention of Carl Linnaeus, the “Father of Moderns Taxonomy,” who defined our scientific system of naming living things with a genus and species in 1753. Twinflower was Linnaeus’s special favorite. But although Linnaeus reportedly was arrogant, and named nearly 8,000 plants during his lifetime, he refrained from naming any after himself. Instead, he cheekily named beautiful plants after his supporters and named weeds after his critics.

Linnaeus first named this sweet little flower Rudbeckia, for two Lapland explorers who knew it well. Later on, he also applied Rudbeckia to black-eyed Susans, which left twinflower in need of a new genus. Linnaeus’s friend, Jan Frederik Gronovious, stepped in and named Linnaeus’s favorite flower after the botanist himself. It became Linnaea borealis.

Linnaeus’s influence circles the globe, so it’s appropriate this his namesake plant does as well. Twinflower grows across the northern hemisphere from Sibera to Sweden and across North America. In Europe, foresters consider twinflower to be an indicator of ancient woodlands. I often see it across the upper Great Lakes region, and I’ve also seen it in northern New England. The Rocky Mountains and Pacific Northwest have it, too. Despite being so cosmopolitan, there’s a definite gap in its range across the Great Plains. It can’t survive those stark South Dakota prairies.

So how did this tiny little belle come to be separated east from west? Bunchberry, thimbleberry, wild sarsaparilla, and more share this disjunct pattern of their populations.

Not long after the glaciers melted, these plants would have enjoyed the cool, damp climate they prefer across much of the continent. Then, about 9,000 to 5,000 years ago, the climate warmed. During this Holocene Climate Optimum, warmer, dryer conditions forced these northern species out of the arid Great Plains. They were left to survive in the refuges that mountains and boreal forests still provide. By vining perennially over its habitat, twinflower is able to exist in isolated microhabitats far from its strongholds. But climate change has become a significant concern for the conservation of this species, especially on the edges of its current range.

Although I see it often at home, I felt a special kinship with twinflower on this hot, arid hike as we both found refuge in the cool shade of a north facing slope.

For 50 years, the Cable Natural History Museum has served to connect you to the Northwoods. Come visit us in Cable, WI! Our new exhibit: "Better Together--Celebrating a Natural Community" is now open!
Posted by Emily M. Stone at 3:17 PM