Fox tracks crisscross my yard. Down the trail to the lake, along the shore, across the hill, and back. The strings of tracks remind me that I’m not the only one who lives here. These woods are alive, even under the blanket of snow and the low-slung stars. I try to read the fox’s nocturnal adventures in the tracks—to guess at his life in the forest—but so much of nature, even when the daylight shines again, retains its mysteries. 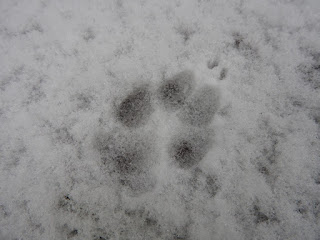 Have you ever wondered what happens out there, under the heavens, while you sleep? I went to bed last night with a crystal-clear sky; stars sparkling like diamonds in the plummeting cold. This morning I woke to a blanket of clouds and a dusting of snow on my windshield. When did the clouds roll in? What did the snow look like as it fell? Who was out there to see it? Was the fox trotting along thinking, as poet Mary Oliver infers, “It is music to wander the black back roads outside of town—no one awake or wondering if anything miraculous is ever going to happen, totally dumb to the fact of every moment's miracle…” 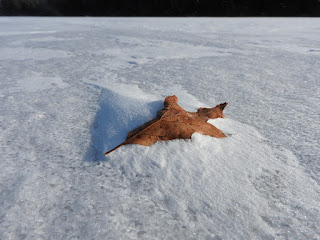 The sparkle of hoar frost (from the Norse hārr, “gray with age”) on the trees this morning certainly makes it seem like something extraordinary transpired last night while no one was awake and wondering. Extraordinary, but still explained by chemistry and physics. As the temperature dropped below the dew point, water was squeezed out of the air. In this case, the dew point just happened to be below freezing (therefore it is technically called the frost point), so water precipitated as ice on cold objects instead of condensing as dew. The frost crystals often form intricate patterns that scatter light, making them appear like a white frosting on all the trees, as if the world was made of glitter.

Down the trail to the lake, along the lakeshore, I make my own tracks. Two parallel ribbons stream out behind me as I kick and glide on the frozen lake. Howling winds have sculpted the surface into a miniature, sand-less Sahara. Shallow, snow-dust storms skitter across the surface (the sculptures are works in progress), making me feel like a giant peering down onto the wilds of Antarctica. The abrasion of crystal clouds sounds like radio static. A loud crack and eerie boom echo through the ice. I can feel it reverberate under my skis. This raises my heart rate far more than the swinging of arms and legs. 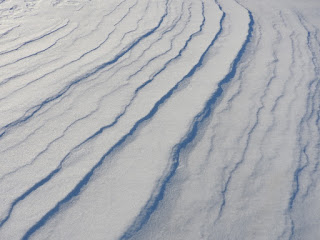 As the temperature drops again after weeks of unseasonal thaws, the ice expands and fractures. I can see fresh cracks where they sketch rough fault lines through wind-packed snow.

During freeze-up, thin ice acts as a huge membrane across which the crackling and popping sounds spread. One website, devoted to recording these ice songs, (search “Dispersion of Sound Waves in Ice Sheets” to find it) explains that: “The high frequencies of the popping and cracking noises are transmitted faster by the ice than the deeper frequencies, which reach the listener with a time lag as glissandi (a glide from one pitch to another)” Science explains even the marvel of ice singing.

This late-winter ice is merely expanding back toward the shores it had shrunken away from when they reflected too much of the sun’s warmth. It may also be adding depth to an already substantial thickness. The deep pops and rumbles sound like winter thunder.

Almost home, a black shape lopes out of the white pines on the point. I pause to squint, then ski faster, hoping that it will come into focus. The apparition catches sight of me and reverses course, turning back into the trees. I spend the next few minutes in suspense. Who will the tracks reveal? Otter? Fisher? Fox. Its small, four-toed tracks and two-by-two side trot pattern are unmistakable. This red fox was looking at me as it ran, causing its front feet both to land on the left side of its trail, and its hind feet to land on the right. I look from the tracks into the woods, my questions only half-formed in the half-light.

As day fades back to twilight, I sense again the music of wandering the back ways outside of town. A fingernail moon glitters, ice thunders, a fox hunts in the snow, our planet spins toward spring.

Tonight I, and maybe you, and maybe even the fox, are awake and wondering.

What is this moment’s miracle? 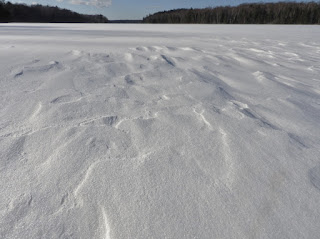 Note: Portions of this article were published in 2013.