A Thirst for Nature

As my car came to a rest in the driveway and the engine noise faded, I took a deep breath of relief and opened the door. The blast of frigid air was refreshing after the suffocating warmth of the heater. Leaving my week’s-worth of travel debris in place, and not bothering to dig for my mittens, I quickly zipped my jacket and balled my hands into the pockets.

A desire had been rising up in my chest like a great thirst, but I’d been drinking tea to stay awake for the past seven hours. The thirst wasn’t for liquid, it was for nature. My driveway did not disappoint. I drank greedily from the fresh air, hemlock boughs, rough bark, and mossy stumps.

In the wee morning hours, a fresh dusting of snow had cleaned up the forest. Now I greeted a dainty string of fox tracks as if the owner were still attached. I’ve watched those little paw prints tripping along the driveway so often that sometimes I disregard the fact that they were made by a live animal. I assign a personality--a life—to the embossments themselves. Not only that, but I count the string of charming hollows among my friends. On other days, though, I try to follow the tracks into the mind of the fox and listen to the music playing there. 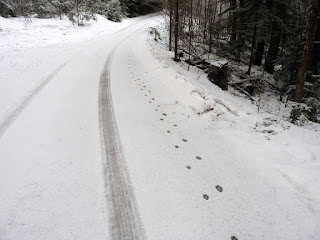 “All night under the pines the fox moves through the darkness with a mouth full of teeth and a reputation for death which it deserves.” Writes Mary Oliver in her poem, “Fox.”

Walking slowly next to the tracks, I breathed deeply and gazed into the tree canopy, admiring the graceful arc of branches and the lacy friendship of twigs. I think this is what the Japanese mean by shinrin-yoku or “forest bathing.” I certainly felt my mind cleansed and my body refreshed. With every breath, stale air and tension released and peace flowed in. 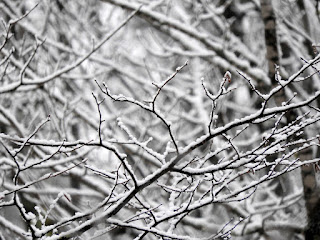 You may wonder what made me so thirsty for the woods. It was vacation of all things! A trip south (to central Iowa) to see oodles of wonderful, lovely, long-lost family. For the first day, I brought two tubs of MuseumMobile props. In the suburban second grade classrooms, eager fingers (include those of my niece and nephew) explored wolf canines, beaver incisors, and deer antlers. As we compared herbivores, carnivores, and omnivores, the kids giggled at rubber replicas of animal scat before using their key to identify which species dropped which load. When I brought out the soft furs of coyote, skunk, and cottontail, the little hands could not refrain from grabbing. I got the sense that they, too, were thirsty for nature.

After school let out, we took a brisk walk down to the shores of a bedraggled reservoir. The exposed mud-flats looked dingy from afar, but up close we discovered a treasure trove of snail shells, which apparently never get old when you’re seven. (Later, at home, we discovered that each shell was graced with its own fawn-colored patterns, and the array drew our admiration.) 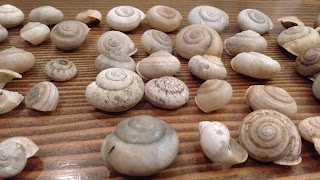 Still at the lake, pockets full, we turned and walked backward up the hill, hoods turned against the bitter wind. This small adversity just magnified the adventure. Near the top, a great bur oak tree stretched out a hand invitingly. That silent appeal was all it took to get both kids climbing into its rough and sloping lap.

So nature was not entirely absent during my time in the city, but the tidbits I devoured just served to sharpen my hunger. Curtains were drawn all day, and anyway, the windows just looked out on lawns and houses. The cardinal singing above the rush of cars. The fresh flowers wilting in the cavernous wedding reception hall. The cottontails in the backyard racing like maniacs with their friends at dawn, each in their own chain-link box. The great blue heron—dignity intact among the exploding development of suburbia—gliding in to land in the manicured pond on the community college grounds.

And hawks. Mostly red-tails, but probably others, too; hunting from utility poles, from fence posts, and from above rushing traffic. I caught my breath as one dove like a streak of wildness into the dried road ditch grass.

Nature is everywhere, if you allow yourself to see it. I take comfort in that. I know that many have learned to live on these tidbits, with an occasional banquet at a national park. I haven’t, though. I’m always hungry for more, needing daily feasts and occasional full immersion experiences to quench my thirst.

Here at the end of my driveway, I drank my daily fill, and planned for more. As I turned to go, the eastern sky was deepening into a rich blue, but a golden sun played peekaboo to the southwest. Just a few trunks were lucky enough to feel the caress of its last rays. I feel like I’m one of the lucky ones, too. Not everyone gets to live in the Northwoods. But not everyone wants to. Maybe others thirst for the excitement of cities, or the comforts of suburbs. Me, I thirst for the comfort of hemlock boughs and the music of a fox.

“Climb the mountains and get their good tidings. Nature's peace will flow into you as sunshine flows into trees. The winds will blow their own freshness into you, and the storms their energy, while cares will drop off like autumn leaves.”  --John Muir

For 50 years, the Cable Natural History Museum has served to connect you to the Northwoods. Come visit us in Cable, WI! Our new exhibit: "Better Together--Celebrating a Natural Community" will open on May 3!