“Wow. Look at the stars,” said Drew as he stepped out of the car. With no moon, they glittered brilliantly in the inky black sky. I paused from unloading the car, and gazed heavenward with him. Breathtaking. I love living in the middle of nowhere. But after I closed the car door, and even the dome light went dark, a sound penetrated our consciousness, too.

Hoo. Hoo. Hoo. Hoo. The repeated note sounded kind of like a back-up beep, or the car’s warning ding that I left my lights on or the keys in the ignition. But all was dark, the keys were in my hand, and no engine noise accompanied the mystery. Suddenly my synapses zapped, the sound registered, and my eyes lit up in the darkness. “It’s a saw-whet owl!” I grinned, excited at the prospect of a new avian neighbor.

The last time I heard the incessant (and somewhat annoying) call of a saw-whet owl, I was in the Sierra Nevada mountains of northern California. From there to Wisconsin seems like quite a stretch, but saw-whets breed in mature forests with an open understory from southern Canada to the northern and western United States.

While their habitat preferences are pretty well understood, the movements of saw-whets are not. Granted, it’s hard to track small things that are well-camouflaged and only fly at night. We do know that they can cross the Great Lakes and other large bodies of water. One saw-whet owl even landed on a fishing boat 70 miles from shore in the Atlantic Ocean! Concentrated banding/recapture efforts have started to fill in the blanks.

One study in southern Indiana found that saw-whet owls tend to move into a territory when prey numbers are high, and move somewhere else when prey numbers are low. Deer mice are their preferred prey, along with other small critters. The study also noted that during a year when the owl numbers were below average, it had also been the worst year for acorns in recent history.

This is just one more example of how mast trees send ripples far out in the ecosystem. Mast trees save up their energy for three to five years before synchronously producing thousands of seeds (acorns in this case) all at once. Since mouse populations are known to fluctuate with acorn abundance, it follows that during a non-mast year, the mouse population would be low, and the owls would migrate somewhere else.

It also makes sense that the mast of acorns we experienced last fall may have increased the local mouse population and attracted this cute little hooter to my backyard. (Remember our discussion of how passenger pigeons might once have eaten all the mast, leaving no acorns for the mice, and no mice for the deer ticks? And how acorn caps made the ski trails rough this winter?)

A banding study from Maryland found that saw-whets increase and decrease on a two year cycle, with an irruption (a migration in response to irregular changes in food supplies) every four years. Based on that data, 2015 should be an irruption year for saw-whets!  In theory, it’s a simple equation: more acorns = more mice = more owls. In nature, I know that nothing is quite that free of complications.

No matter why he’s here, I’m excited that the smallest owl in eastern North America is beeping in my woods. Without feathers, the saw-whet owl is the same size as a robin (another sign of spring that’s singing in my woods). With feathers, he is an adorable, top-heavy oval of brown-and-white-streaked fluff with expressive yellow eyes. If he’s lucky, a female will arrive soon; responding with her own series of whistles. To seal the deal, he must fly in circles, and then present her with a gift of food – the limp body a mouse.

If they decide to breed here, the saw-whet couple will likely place their nest in an old woodpecker hole, excavated by the pileated woodpeckers or northern flickers that also frequent my woods. She won’t do any interior decorating, but just starts her family on whatever debris is at the bottom of the cavity. If the mice are plentiful, she may lay up to eight eggs.

Perhaps it’s a little early to throw a baby shower for my new visitor, but I’m thrilled at this addition to the neighborhood, and wish him a well-fed and productive spring.

For over 45 years, the Cable Natural History Museum has served to connect you to the Northwoods. Come visit us in Cable, WI! We are currently constructing our new exhibit: “Lake Alive!” which will open May 1, 2015. 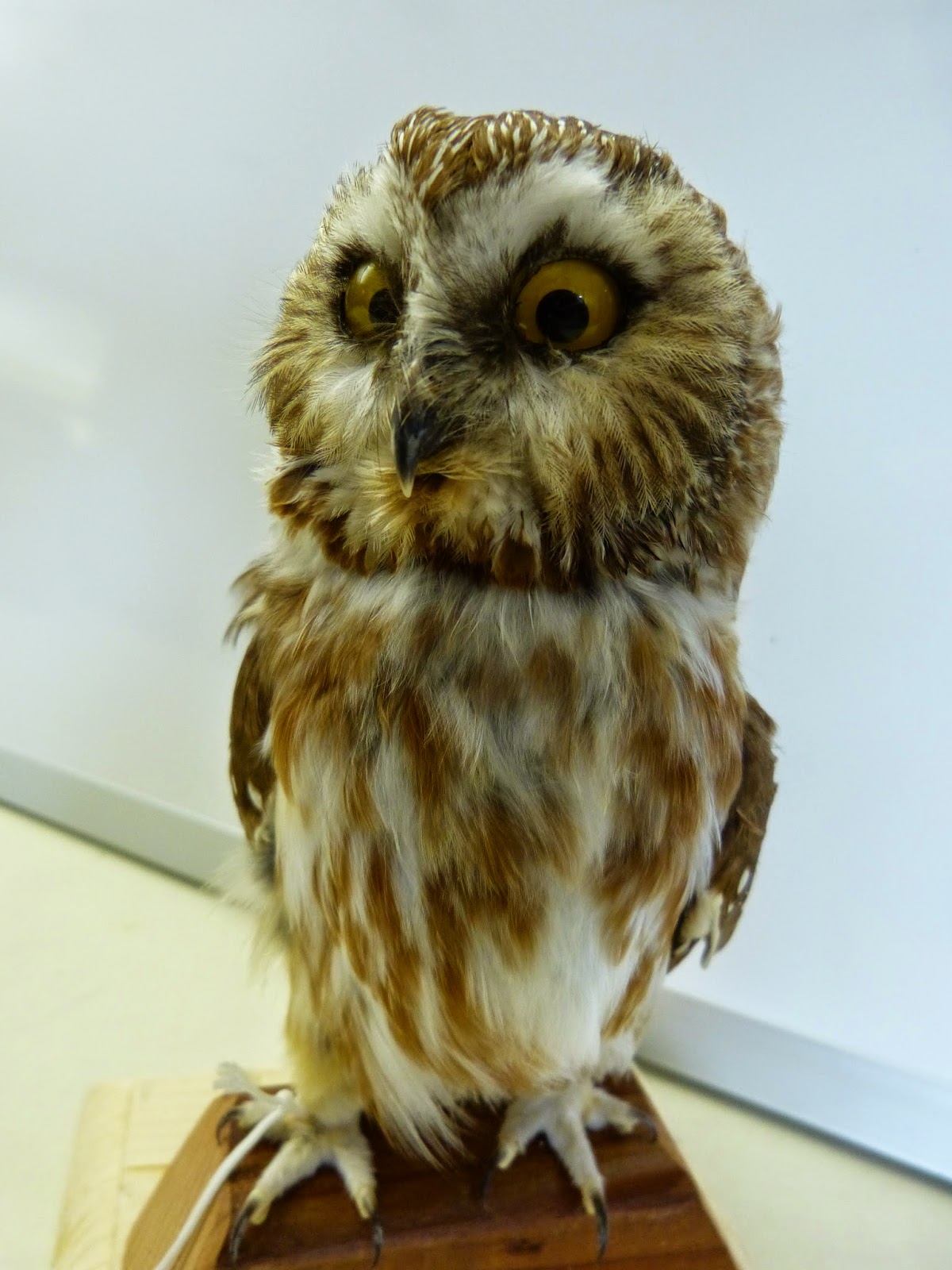