The windows in my kitchen stay open throughout most of the summer. Various insects come and go, with dark fishing spiders – the largest spiders in the Northwoods – following close behind. (Don’t be alarmed by their 3-inch leg span, fishing spiders are harmless to humans.) But with the chilly temperatures lately, I’ve had to close the glass, bringing down the prison doors on anything still living in the warm, dry space between window and screen.

While setting out orange tomatoes to ripen on the windowsill the other day, I noticed the brittle carcass of a bug in that no-man’s land. A closer look revealed extremely long, delicate legs, a long, skinny abdomen with dark brown triangles on a beige background, and striking, chestnut-brown patterns on the otherwise clear wings. With these unique features it was pretty easy to identify the critter as a Giant Eastern Crane Fly, Pedicia albivitta.

My previous most memorable experience with crane flies was at Girl Scout camp several years ago. A flock of the leggy flies had gotten indoors and were bopping awkwardly around the ceiling, looking a little bit like bigger, scarier versions of the buzzing bloodsuckers we slapped every three seconds. GIANT MOSQUITOES were INVADING the camp!!! Our reaction was a mix between scientific curiosity and girly freaking out. No, reassured our camp director, these were actually “mosquito hawks” that eat mosquitoes and don’t harm humans.

We were both wrong.

It seems that lots of people have incorrect notions about crane flies, because most of their common names – mosquito hawk, mosquito wolf, skeeter eater, and gollywhopper – have nothing to do with their actual biology. (Gollywhopper!? Apparently, in Maine it is another name for a turkey’s beard, as well as a giant, edible, folklore chicken. How it applies to a crane fly is a question we need to ask a Mainer.)

The scientific name of the species in my kitchen, Pedicia albivitta, is a little more accurate. The specific epithet, albivitta, comes from the Latin "albus" (white) + "vitta" (a band; a stripe of color). The pattern on the Giant Easter Crane Fly’s abdomen certainly fits that description. The genus, Pedicia, references the crane fly’s family, Pediciidae, which is commonly referred to as the “hairy-eyed crane flies.”

Hairy eyeballs? Ew! Well, actually, if you have compound eyes like a fly, then there are spaces in between the eye facets where short, erect hairs can grow without too much trouble. Still, all other families of crane flies (and humans, thank goodness!) have glabrous eyes, which is scientist-speak for “hairless.”

Crane flies are in the order Diptera, along with house flies, fruit flies, mosquitoes, gnats, midges, and 240,000 other species. Since I love to dissect names (it’s less messy than dissecting the critters themselves), Diptera means “two winged” (from the Greek di = two, and ptera = wings). Crane flies have one main pair of wings and a vestigial second set of wings called haltares. Those can flap a little and act as gyroscopes to control body rotation. Even with that adaptation, crane flies are still incredibly awkward fliers, probably due to their excessively long (and easily broken) legs.

Luckily, crane flies don’t have to fly for very long. Their adult stage only lasts about 10 to 15 days between metamorphosis and death. The adult female emerges from her pupa with mature eggs ready to be fertilized. If a male can be found, she will mate immediately. Despite their weak and bumbling flight, crane flies sometimes mate in mid-air.

The pointy ovipositor on the tip of the female’s abdomen is one reason that people imagine crane flies bite or sting. Really, it is just used for depositing eggs into wet soil, mats of algae, or even on the water surface.

The larvae are legless, and some have a tough skin, which earns them the nickname of “leatherjackets.” The various species live in many habitats – from dry land to marine environments and fresh water – and employ an assortment of feeding techniques. Some scrape algae, bacteria, and diatoms off surfaces; others gather decomposing organic matter; some feed on roots and other vegetation; and a few are predators. Some species even eat mosquito larvae! The crane fly I found is a predator, but lives in wet soil and doesn’t encounter mosquito larvae.

Crane fly larvae in streams help break down fallen leaves, and are good indicators of water quality. Because they need an influx of dead leaves for food, these species make sure to match their period of growth with the fall of autumn leaves. Since the wind that forced me to close the window on my crane fly is also bringing the leaves down, I hope the ones I didn’t trap are getting busy!

Find us on the web at www.cablemuseum.org to learn more about our exhibits and programs. Discover us on Facebook, or at our blogspot, http://cablemuseumnaturalconnections.blogspot.com 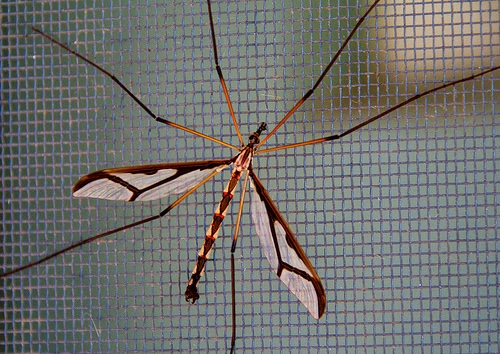 Giant Eastern Crane Flies have a distinctive pattern on their wings that make me think of sleepy eyes. Although their long legs are so fragile that one scientist described them as “deciduous,” small hairs actually allow them to walk on water!
Posted by Emily M. Stone at 8:48 PM