Late summer is a colorful time in the Northwoods. Most of the forests are still a vibrant variety of greens, but the swamp maples are beginning to flame crimson, roadside ferns are glowing in rich shades of golden brown, here and there clusters of yellow leaves dot the canopy, and many species of aster flowers are dancing in the breeze.

In the road ditches, sandy areas, and in the parking area at the Cable Community Farm, one particular aster brightens up these sometimes scruffy landscapes with a pinky-purple color that my niece Kylee (who just started kindergarten!) would love. The delicate tufts of thistle-like petals remind me of Dr. Seuss’s Truffula Trees in The Lorax. Thin, grayish, lightly fuzzy leaves photosynthesize while resisting desiccation in their dry, sunny habitat.

In some ways, this flower is quite lovely. In others, it is a non-native, invasive scourge of North America! This pesky spotted knapweed is listed as a prohibited noxious weed in Minnesota. Wisconsin defines it as “restricted.” This means that it is an “invasive species that is already established in the state and causes or has the potential to cause significant environmental or economic harm or harm to human health.”

So, last week, a small group of volunteers converged on one particular patch of spotted knapweed. Under the guidance of Pam Roberts, Coordinator for the Northwoods Cooperative Weed Management Area (NCWMA), we grabbed shovels and trowels out of the Cable Community Farm toolshed, and began to dig the fuzzy gray plants out of the parking area, just a few steps away from our gardens. Thick taproots clung to the soil as we raced to stuff all the flowering knapweeds into garbage bags before they set seed.

How can a little pink flower be so bad? Spotted knapweed’s incredible adaptations as a pioneer species – hardy organisms which are the first to colonize disrupted or damaged ecosystems – are also what make it a pest. In this case, the plants were pioneering on top of the old asphalt driveway, now covered in some places by a thin layer of newly-formed soil. The sturdy taproots seemed to wedge their way right down through cracks in the surface, or into the rest of the gravely drive. Those taproots are water-pumping powerhouses, and can often snag the moisture right out from under other nearby plants.

Using that extra moisture, the knapweed sets seed – a thousand per plant.  The seeds are dispersed naturally by wind, water, and wildlife. Humans help them along on our vehicles, in contaminated hay, on farm machinery, with gravel distribution, logging equipment, and road construction. The seeds can persist in the soil for at least five years, just waiting for a wet fall or spring to trigger germination.

Neither the first-year basal rosette of leaves nor the second-year flower stalks are enticing to herbivores. Chemicals in the leaves are suspected to cause skin irritation in humans (we all wore gloves to rip them out), and also dissuade most animals (except sheep) from grazing them. Because spotted knapweed was introduced from Eastern Europe, its normal predators aren’t here to eat it.

Just those three adaptations – long taproots, high seed production, and low palatability – would be enough to make spotted knapweed, well, a weed. Many of the plants-out-of-place that I tug out of my garden have similar characteristics: dandelions, mustards, quack grass, etc. But knapweed does something more sinister, too. It engages in biological warfare.

Perhaps it’s a little overdramatic to use battle metaphors for a flower, but it is true that spotted knapweed releases a toxin from its roots that stunts the growth of nearby species. This is known as allelopathy. The toxin is called catechin, and it inhibits seed germination of other species by acidifying the cytoplasm (the fluid matrix) of their cells, causing the cells to die.

By killing off the competition, knapweed gives itself even more of an advantage. But it doesn’t win itself any friends. Since knapweed was introduced to North America in an alfalfa shipment to Bingen, Klickitat County, Washington, in the late 1800s, it has spread to 45 states and most of Canada. Just in Montana, its direct and indirect economic impact (due to its negative effect on rangeland) is $42 million dollars each year. That’s a pretty big effect for a pretty little flower!

In Wisconsin and Minnesota, it mostly threatens dry prairie, oak and pine barrens, dunes and sandy ridges, roadsides, and disturbed areas. And my community garden. You can help!  These plants only live for two years, so the simplest methods of control are early detection and pulling. A couple weeks ago, I spotted some in the ditch as I was biking along. On my way home, I was puzzled to see the purple flowers lying in the middle of the road. Then I passed a local woman out for a walk – pulling them up and throwing them out in the sun to die as she passed. She may not completely solve the problem, but her efforts will certainly help!

Herbicides and insects brought over from its native habitat are also available to help control large infestations of knapweed. But you should consult with professionals before trying those methods. Your local Cooperative Weed Management Area is a great place to direct questions and concerns.

While I know that some folks struggle with the term “weed,” and balk at killing any living thing, I see the control of non-native invasive species as a necessary evil in protecting the biodiversity of our native plants and animals. We created the problem, so now we bear some responsibility for fixing it. About 42% of the species on the Federal Threatened and Endangered Species Lists are at risk primarily because of invasive species. One easy way for you to help is go pick some pretty pink flowers! 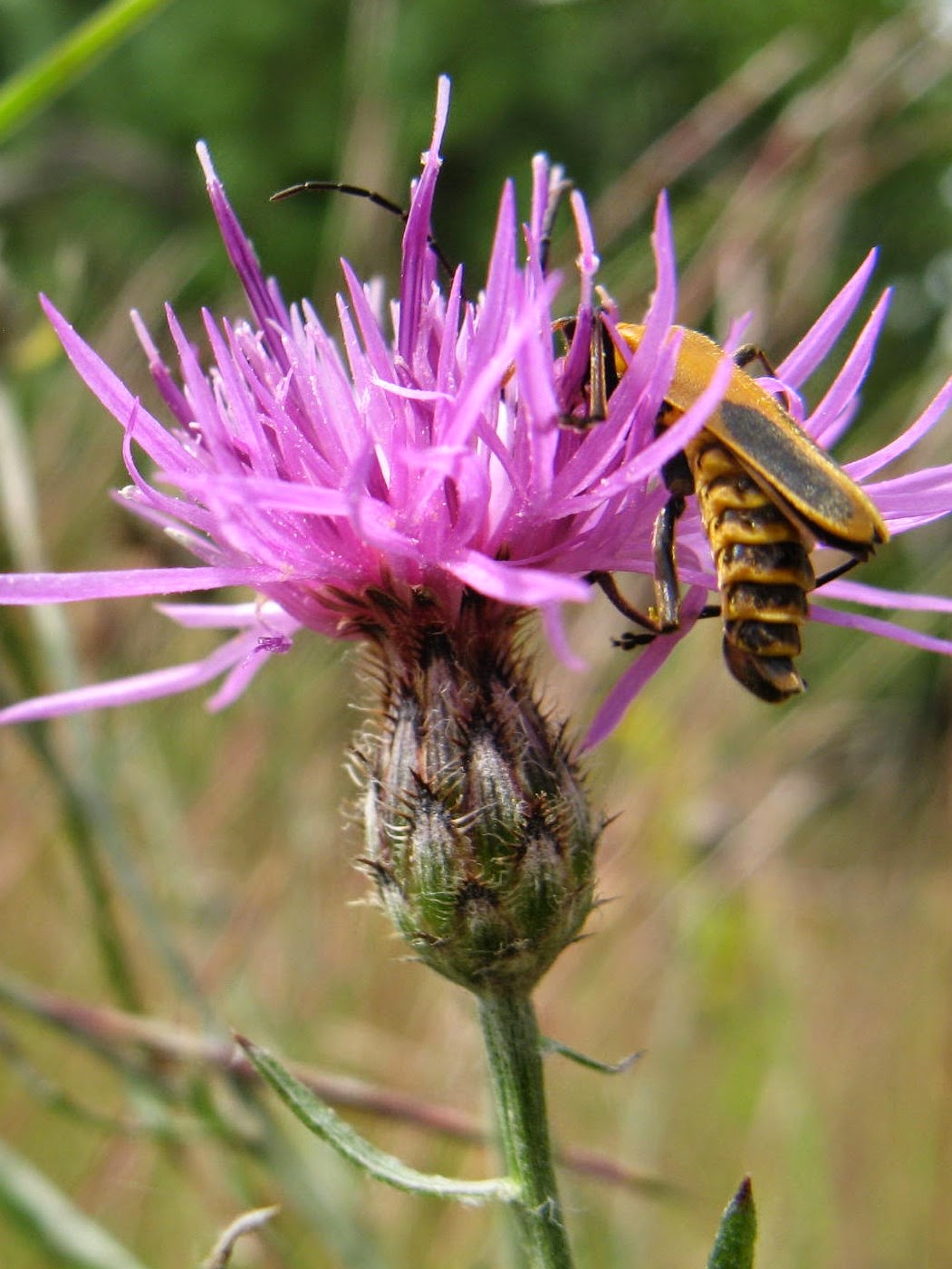 Spotted knapweed is a pretty pink flower that can cause pretty big problems as an invasive weed!
Posted by Emily M. Stone at 8:24 PM