(This article from last summer recently earned First Place in the Newspaper/Family Participation-Youth Outdoor Education category of the Outdoor Writers Association of America’s 2020 Excellence in Craft Contest! Emily’s book, Natural Connections 2: Dreaming of an Elfin Skimmer, also won second place in the book category!)
The last time I felt like a serious angler I was 5 years old, and my brother and I were pulling crappies out from under a bridge one after another. I’m not sure my dad ever got a line in the water, because he was so busy removing our fish and replacing our worms from the stern of the canoe. That was an epic evening, and it became one of our most lovingly worn family stories.
That was the peak of my fishing career. Fish are a murky mystery in my repertoire of natural history knowledge, but I’ve been trying to remedy that. A few weeks ago my learning came in the form of electroshocking trout with the DNR on the Namekagon River. More recently I joined a DNR crew to tag both sturgeon and smallmouth bass on the Couderay River. They’re monitoring the fish’s return after a dam removal downstream. Combining science with fishing on beautiful rivers is a treat, and I’ll tell you more about that later.
In between those two Museum programs, I rushed off to Yellowstone National Park for a quick trip with my parents, brother, sister-in-law, and their four kids. It was the reunion tour of a 1989 family vacation when I was 7 and my brother Andy was 11. Like the evening of crappies, that trip to Yellowstone was an epic vacation we measured all others against. We watched a grizzly bear eating a fish in Hayden Valley, marveled at Old Faithful, and ate countless meals of pie-iron pizzas around various campfires.
I wasn’t planning to make this vacation into another fish field trip, but my middle nephew, 15-year-old Derek, had his own plans. The rest of us were focused on seeing the geysers, mud pots, and hot springs; spotting the wildlife; and doing a little hiking. Derek only wanted to fish. The compromise: we made a point to find picnic areas near streams when we stopped for lunch and dinner. Derek fished while we ate.
The first evening we hit a jackpot. Our route from the Lamar Valley back down to West Yellowstone took us right past the Sheepeater Cliff picnic area just when our stomachs were starting to growl. Named after a small tribe of Native Americans who specialized in hunting bighorn sheep, the Sheepeater Cliffs are spectacular walls of columnar jointed basalt. That’s the same type of rock I’ve visited at Devil’s Postpile National Monument in California, and that many of us have seen at Gooseberry Falls State Park on Minnesota’s North Shore.
The picnic area sits just beyond the jumble of rocks at the base of one cliff. It’s close enough that we kids (the 10-year-old twins and I) could scramble around while brats heated on our portable grill, and we all could watch marmots scurry through the talus while we ate.
The Gardner River that exposed those cliffs just happens to be one of the few streams in Yellowstone where kids are allowed to fish with worms. Derek was in heaven. He caught his first fish within minutes. I was thrilled to recognize the little guy with light spots on a dark background as a brook trout—the favored son of the Namekagon River and its spring-fed tributaries that I’d helped catch while electrofishing. Derek soon squashed my excitement though, when he informed me that brook trout were introduced here, and that they are one of the culprits in the decline of the native cutthroat trout.
I’ve known for several years that lake trout in Yellowstone Lake are a serious threat to cutthroats, since my friend Kris Millgate wrote about the gillnetting operations to remove non-native lakers. But I hadn’t paid attention to the less extreme fish competition and management happening in Yellowstone’s streams, until now.
Later in the week, we found ourselves lighting charcoal at a different picnic area, and setting up an assembly line to make pie-iron pizzas. This would be the kids’ first experience with Andy’s and my favorite camping meal. Of course, Derek disappeared up the stream, and soon returned with a tiny little rainbow trout, less than 6 inches long.
In some areas of the park, designated as “Nonnative Trout Tolerance Areas” even the introduced fish are so important to wildlife that anglers must release all rainbows and brown trout, and keep only a limit of 5 brookies. This evening’s creek was in a “Native Trout Conservation Area,” though, and the regulations require anglers to catch and release all native fish, but put no possession limit on nonnative fish. Soon that little rainbow—minus its head and guts—was steaming merrily in a foil packet on top of the coals.
Later—with his pizza sitting nearby getting cold—Derek expertly removed the fish’s spine and ribs in one elegant piece. Chewing thoughtfully, he announced that he could taste the sulfur from the hot springs that flowed into this creek, and offered me a bite. I accepted the flaky white chunk of perfectly cooked meat, and decided that whatever sulfur I sensed was through my nose not my tongue: Yellowstone’s own terroir. 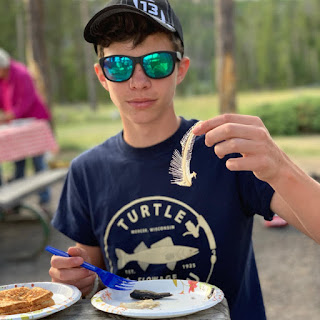 Rainbow trout are non-native species in Yellowstone National Park, and eating them benefits the survival of the native cutthroat trout. My nephew Derek was happy to do his part for conservation. Photo by Emily Stone.
I’ll probably never be a more serious angler than that evening when I was 5, but I’m happy to report that by hanging out with the experts, I’m slowly filling in some gaps in my natural history knowledge. Derek’s obsession with fishing gave us all a better understanding of the conservation happening in America’s first national park, and those experiences are now part of a new generation of family stories.
Emily’s second book, Natural Connections: Dreaming of an Elfin Skimmer, is now available to purchase at www.cablemuseum.org/books. Or order it from our friends at redberybooks.com to receive free shipping!
For more than 50 years, the Cable Natural History Museum has served to connect you to the Northwoods. The Museum is currently closed due to COVID-19, but we're still building our new exhibit and bringing you educational content. Connect with us on Facebook, Instagram, YouTube, and cablemuseum.org to see what we are up to.
Posted by Emily M. Stone at 7:30 PM