The Joy of Sliding

It was still dark when I pulled ski pants over yoga pants, zipped up my puffy coat, and headed out to clear fresh snow off my car. I knew that my plow guy would arrive soon, and I wanted to be ready to play musical parking spots.

Shovel in hand, I shuffled through six inches of dense snow. Before reaching my car, though, I noticed that someone else had made tracks before me. I hadn’t expected that. This was the first measurable snowfall of the year, so the tracks hadn’t been sunk in a previous layer—they’d been made during the night, after half the stuff had already fallen.

Feet held still now, I pivoted in place to follow the tracks without wrecking them. A surprised “ha!” escaped when I saw that tracks led right up to my doorstep. I’d just walked right past them. Leaning in, I saw the naily, 5-toed tracks of a Mustelid, daintily imprinted on the dusting of snow that had blown under the porch roof. My visitor should have knocked!

Almost as big as the palm of my hand, I knew that these tracks couldn’t have been made by a mink or ermine. They were fisher or otter tracks for sure. I snapped a few photos before following the tracks back out across the driveway. On the smooth snow, three, interwoven sets of prints were interrupted by long troughs, in a dot-dot-dash, Morse Code-type pattern.

Otters, then: critters who are known to play, and who love to use sliding as a method of travel. Like grade-schoolers on a snow day, this romp of otters must have dashed joyfully into the swirl of flakes and the transformed world. Already dressed in warm and water-repellant fur, they didn’t even have to bother pulling on a snowsuit. Otters’ short legs and thick necks make them powerful swimmers, but less agile on land—unless there is snow. Then their bodies become streamlined sleds propelled by powerful, webbed feet.

Once, on a winter camping trip in the Boundary Waters, I skied beside a set of otter tracks that climbed up on the steep bank, only to slide back down. Up and down; up and down. There wasn’t anything to eat up on the lakeshore. It could only have been for fun.

Cross-country skiers—and the 6-year-olds inside all of us—know exactly why you go to the trouble of climbing a snow-covered hill: so that you can slide thrillingly down the other side.

Just a few days after that first snowstorm, while milling around the kitchen after Thanksgiving dinner, my dad noticed a red squirrel having difficulties on the shed roof. Just as we all paused to watch, it skittered off the edge in a cloud of snow and plopped to the ground.

The little guy seemed not to remember how he’d gotten on to the roof in the first place, as he tried to climb the vertical walls (not grippy enough), summited a plow pile and tried to jump (not high enough YET), and finally scurried to the far side where a hemlock trunk provided the prefect ladder and launch. Just a few seconds after disappearing around the corner, his little nose appeared over the peak of the roof. “Now what?” we wondered.

As the squirrel plowed through the fluffy frosting toward the edge, we jeered and commentated on this journey. Suddenly, he took a flying leap off the edge, missed a spindly hemlock, and plopped into the snow. Was the squirrel playing? Would we be able to watch him dive into the snowdrift over and over with squeaks of glee?

This scene brought to mind the chapter “Moon Magic,” from Sigurd Olson’s book, The Singing Wilderness. On a full moon night near the Canadian border, Olson watched a mouse using the roof of his tent as a slide. “Faster and faster it ran, intoxicated by its new and thrilling experience; up along the edge straight toward the center of the ridge rope, a swift leap, belly down, legs spread wide to get the full effect of the exhilarating toboggan it had found, a slide of balloon silk straight to the needle-strewn ground below.”

So we watched eagerly as the squirrel re-summited the roof. Instead of a running jump, he crept down the roof slope—almost tunneling out of sight in the snow. At the eaves, he reached around and clung upside down to the edge of the shingles, like a mini Tyrolean traverse. While he slipped and scrambled, we shouted encouragement and ridicule. Until suddenly, he was gone. 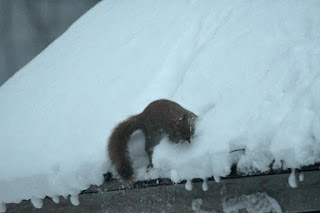 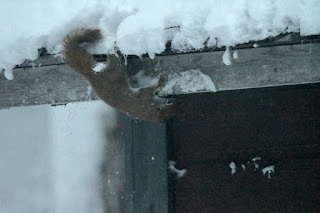 Later, once we’d strapped on snowshoes to explore the woods, I took a detour to check out the squirrel’s vanishing point. Tucked up under the eaves was a grooved hole, obviously chewed by rodent teeth. So, the little guy had access to my garden tools and a tub full of compost-ready maple leaves. With the shed door blocked by the snowplow’s mountain, the situation will remain until spring.

Of course, that “situation” also means a transformed world, blanketed in a magical layer of fluff, ready for anyone who wants to experience the joy of sliding. 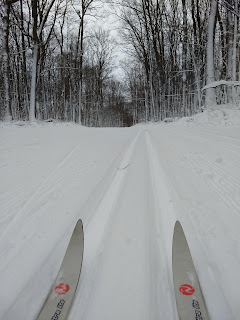