Wading carefully into the Namekagon River, I was grateful for the cool water that swirled around my wader-clad legs. On shore, and above water, the neoprene chest waders were stiflingly hot in the bright morning sun, but below the surface they hugged my legs soothingly. The day was warm enough that I would have preferred to just swim, except for small detail that we would soon be shooting currents of electricity through the water.

Max Wolter, a fisheries biologist with the Wisconsin DNR, held a small floating sled against the current as our field trip gathered around. The sled had been turned into a miniature boat, and held a generator, a plastic storage tub with a large hole in its lid, fish nets, and three long wands run through a transformer box powered by the generator. Another similar boat bobbed by the shore. “We do our orientation in the water so that we can also use this time to check for leaks,” Max explained with a grin, and I could see everyone silently taking stock of their waders.

The Wisconsin DNR uses electro-shocking to survey fish in many inland waters. Slightly stunned fish are netted, identified, measured, and released alive. It’s a relatively efficient way to get a good idea of the species, numbers, and sizes, and to keep track of how well an aquatic ecosystem is doing. Max and a couple of other fisheries technicians had agreed to show us the ropes.

After switching out one pair of leaky waders, we divided the group between the boats and doled out duties. Max and one of the techs each hooked a boat harness around their hips so that they could pull the equipment upstream. Three people per boat grabbed a wand in one hand and a net in the other, and spread out in a fan to the upstream side. I followed cautiously with my camera.

Max started the generator, and then turned the power on. The generator creates electricity as direct current (which is DC, as opposed to the AC alternating current in our home outlets) and sends it out through the long-handled wands, each with an emergency OFF switch by your thumb. The current travels through ions dissolved in the water and connects back to a metal plate on the bottom of the sled. Anything in the resulting electrical field gets a little zap. That’s why we wear the waders.

Each wand holder was instructed to wave the wand through the water, and keep their net at the ready. Zapped fish are momentarily, and incompletely stunned. It’s just enough for the researchers to see a flash of white belly and scoop them up with a net.

Suddenly, a shout went up from Max. One of the participant’s wands had brought up a very large brown trout, and Max had quickly netted it. We all cheered at this fortuitous start to the day. Most of the fish we found were smaller, though, and we moved steadily upstream. Max and the techs made netting the slippery buggers look easy, but the rest of us newbies found ourselves watching as fish slipped out of reach downstream.

When we paused at the top of a sandbar to collect data, the tub on the boat was satisfyingly full. Max pulled out the big one first. Setting it in the metal trough with a ruler in the bottom, he measured 23 inches of beautiful brown trout. The scales on its belly shimmered like gold. Dark spots surrounded by white halos speckled its brown back.


Brown trout are one of the species that the DNR is monitoring closely in the Namekagon River. Both a desirable sport fish and an environmental indicator, they aren’t actually native here. European brown trout were stocked in the Namekagon River starting around 1883. They do better than our native brook trout in warmer water, though, and brookies are now mostly relegated to colder, spring-fed tributaries.

By some accounts, brown trout eat the young brookies, and push them out. And the logging era stole shade from these riverbanks so that sun now warms their waters. That, combined with the uncertain future of climate change, suggests that brown trout may have an important role to play in this ecosystem. The Interagency Fisheries Management Plan for the Namekagon and St. Croix Rivers describes the introduced brown trout as “an ecological surrogate for brook trout” and states that “brown trout are now a keystone species, maintaining the basic biological integrity of this fish community.”

After lunch—of sandwiches, not trout—we took our operation to one of those spring-fed tributaries for comparison. Just as predicted, brook trout were more numerous in the narrow, alder-lined stream, and we admired their orange bellies, gray sides, and red spots rimmed in blue. Each trout was measured, admired, and released. The other species were identified, showed around, and let go. 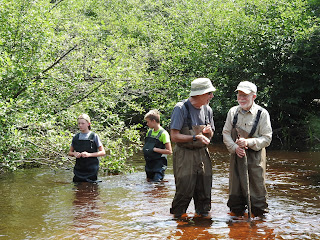 Through our waders, we could feel that the water in this creek was noticeably colder than the river, even though the day had continued to warm. No doubt the fish could feel it too.