Ptarmigans on Top of the World

Listen to this and other weekly articles as podcasts! You can find my Natural Connections Podcast on the Museum's website, iTunes, and Google Play.

Damp oak leaves crinkled under my boots, but few other sounds broke the North Country Trail’s tranquility. Then the whump-whump-whump of a ruffed grouse drumming filled my chest. It’s a sound usually associated with spring, but this male had a legitimate purpose. As young males leave their brood and seek a territory, established males reassert their claims, effectively telling the youngsters to move on.

The sounds of grouse—even the startling ruckus they cause when flushing—are a quintessential part of the Northwoods. But I wonder if they would sound odd to an outsider? This summer in Alaska I met some cousins of our ruffed grouse, and boy did they sound odd to this outsider!

The day after my amazing experience under the northern lights dawned frosty and clear. I continued driving north along the Taylor Highway and then east on the Top of the World Highway. As I neared and then crossed the Canadian border, it became clear that the road was aptly named. The views across rocky, round-topped hills were spectacular and generally unobstructed by trees. I pulled over at every opportunity, and at one turnout I found a dirt road scraped into the tundra that disappeared over a distant edge. With the childhood favorite “The Bear Went Over the Mountain” running through my head, I started walking.

Soon another sound cut in. An odd series of hollow little clucks and rattles emanated from a patch of lichen-crusted rocks. Was there a friendly alien hiding nearby? Or maybe a Star Wars character that only Han Solo can understand? With short, jerking movements the identity of the chatterboxes materialized from the camouflage: ptarmigans. 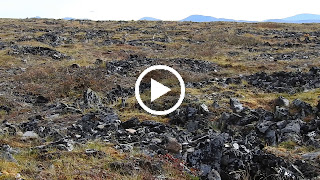 Our ruffed grouse grow comb-like bristles on the sides of their toes to provide snowshoe-like floatation and traction on icy aspen twigs. In contrast, ptarmigans have feet so fuzzily covered in feathers that their genus, Lagopus, means “hare-footed.” They are well-suited to the tundra habitats they prefer.

Alaska is home to three species of ptarmigans. White-tailed ptarmigans seek out alpine neighborhoods with marmots, mountain goats, and Dall sheep. Their range is limited to North America. Willow ptarmigans prefer the lush vegetation of streamsides and marshy tundra. Rock ptarmigans prefer high elevations and latitudes where sparse vegetation reveals their namesakes. Both willow and rock ptarmigans are circumpolar, and can be seen in Scandinavia, Russia, Japan, Scotland, and the Alps.

Peering through my camera, I could barely pick out birds among the rocks. Fine bars of dark and light brown, flecked with white draped over one bird’s top half, while pure white pantaloons peeked out underneath. A scarlet eyebrow labeled that one as a male. Most other birds in this flock of a dozen or more lacked that conspicuous eyebrow and had brown patterns extending much lower—females and young. Based on the location, and the fact that willow ptarmigans would have been more rufous brown, I guessed that these were rock ptarmigans.

Ptarmigan seem tricky to identify by their plumage, though, because it is always shifting with the seasons. Most birds have just two different plumages per year—breeding and non-breeding. Ptarmigans moult three times a year in order to stay camouflaged in the ever-changing tundra. A pure white winter coat is the classic look for all rock ptarmigans. Only the outsides of their tails and a stripe from eye to bill remain dark. When spring winds whisper, males don an avian tuxedo in the form of dark feathers on their head and neck, and they strut about with red combs inflated. Meanwhile, females fade into the background with mottled brown and flecks of white. They are so well-camouflaged that Arctic foxes have been observed walking right past them.

As the snow melts, the remaining white feathers on males’ bellies really stand out. In fact, their breeding plumage may be a little too eye-catching. The predation rate on male ptarmigans skyrockets during breeding season. That’s probably why they roll in the dust as soon as their mate begins egg-laying. Using this style of camouflage, bachelors and polygamous males can precisely customize how long they stay sexy in order to maximize breeding opportunities. Once they’re safely dirty, a full moult into summer browns can proceed at their leisure. Finally, both males and females gain grayish feathers for fall and then almost immediately turn back to white for the winter.

Of course I didn’t know all of that as my eyes were going crossed trying to see these amazingly camouflaged birds among the rocks. I just enjoyed their odd sounds and the “Where’s Waldo” game of trying to spot them. Although the ptarmigans were nearly invisible, they were also pretty tame. It’s no wonder that they are an important game bird in the far north and have been named the official bird or game bird for Nunavut, Newfoundland, and Labrador. 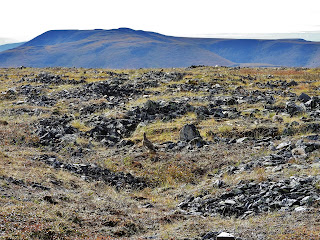 Ptarmigan were also important to gold miners trying to survive brutal winters in the late 1800s. Earlier that morning I’d passed through an old gold mining town that wanted to honor the tasty birds who kept them alive through long winters. Unfortunately, Ptarmigan proved too hard to spell, so they ended up naming their town Chicken—just one more thing on the tundra that sounds odd to an outsider.

Now you can also listen to Emily’s columns as podcasts on Google Play or iTunes!


For 50 years, the Cable Natural History Museum has served to connect you to the Northwoods. Come visit us in Cable, WI! Our new exhibit: “Bee Amazed!” is open.
Posted by Emily M. Stone at 5:00 AM