Bunnies #3: How to Process a Snowshoe Hare 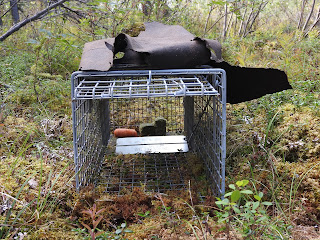 “Empty,” called Claire Montgomerie over her shoulder with a hint of relief in her voice. Matt Kynoch and I paused in our crashing through the brush, sucked on some tart highbush cranberries, waited for Claire to make sure the live trap was still properly set, and then we all tromped back along the transect together. “Full,” announced Matt as we approached the next trap, a snowshoe hare cowering inside. 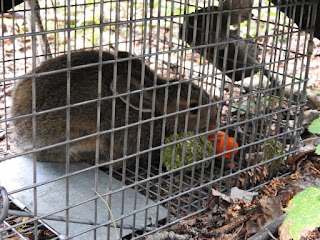 Matt and Claire—both graduate students at the University of Alaska Fairbanks—sprang to action with practiced efficiency. Claire fit a long white pillowcase around one end of the trap, grasped the wire door through the fabric, and opened it wide. Matt crouched at the far end and blew little puffs of air on the hare’s rear end to encourage it to run into the bag. Sometimes, cartoon-like, the hare would blast into the bag with such force that you could see the impression of its little face through the fabric. 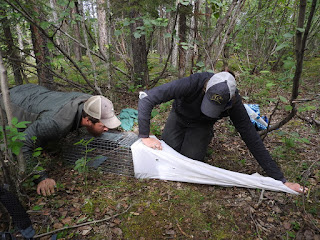 Then the processing would begin: weight, foot length, sex. The numbers on old ear tags recorded, or new ear tags added. Radio collar fitted. Data collected, Claire gently maneuvered the fabric until the hare’s eyes and ears were exposed. Blink. Nose wiggle. Suddenly, in a flash of fur and huge hind feet, the hare would leap back into the forest. I’d reset the trap with a fresh chunk of carrot and alfalfa cubes, and we’d move on to the next wide-eyed bunny. 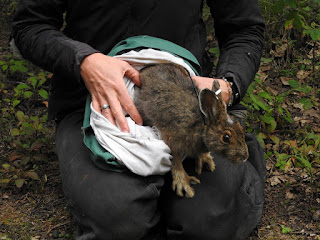 For three days we worked on this mark-recapture survey along a pipeline access road in the Brooks Range of northern Alaska. We marked every hare we caught, and recorded how many new hares versus marked hares we caught each day. Using statistics, Donna DiFolco, a scientist at the nearby Gates of the Arctic National Park, will turn that information into an estimate of hare numbers for this year. Our preliminary opinion? The population is high. Almost every trap was full, which meant a delayed lunch and that sense of relief in coming across an empty trap.

Mortality is high among hares. Up to 85% percent of hares don’t live longer than a single year, and their list of predators is long. Canada lynx are their most iconic predator, but bobcats, fishers, martens, weasels, coyotes, cougars, wolves, owls, hawks, eagles, and various opportunists also eat hares. 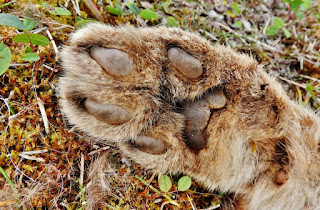 As with many important prey species, hares reproduce about as rapidly as they are eaten. Hares reach sexual maturity within a year after their birth. Their breeding season varies by region, but can begin as early as late December and last until August, with females having up to four litters per summer. Female hares have a second uterus, and a second litter can be conceived up to a few days before the first one is born. Each litter contains an average of 3-5 leverets, who are fully furred with their eyes open. Cottontail rabbits are born blind, naked, and helpless, which is a main difference between rabbits and hares.

Hares’ reproductive rate can vary quite a bit throughout their population cycle. As their population rises, hares begin to have fewer litters. Just after their population hits the bottom, they bump up baby production again. Just why this happens, and the role it plays in the cyclic nature of their numbers, is an open question that Claire is currently investigating.

After the mark-recapture survey was complete, we set live traps along a different transect to collect data for Claire’s master’s thesis. When Claire established the transect last spring, she didn’t realize that a hunting guide focused on Dall sheep sets up a camp near there every fall. Jonas the owner, his wife and two young sons, and another hunting guide John, all came over to see what we were doing. 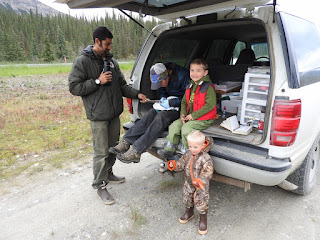 In addition to the basic data, Claire, Matt, and Donna took turns collecting samples that contain information about the hare’s body condition. With each hare they plucked fluffy tufts of hair, clipped a toenail, and drew blood from a vein in the hind leg. Donna and I also helped collect fresh bunny scat into little plastic bags. (See additional photos below.) Before we knew it, John was taking measurements and Miles—age 4 (and incredibly smart and cute)—was handing John baggies and ear tags. My job was to manage the data by filling in a spreadsheet in Claire’s notebook and labeling all the samples with the dates and the hare’s unique ear tag number. We processed those hares in record time, and it was fun! 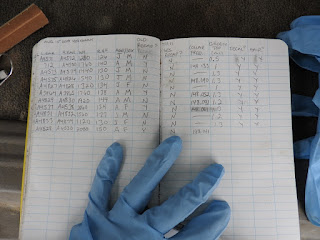 Back at the bunkhouse, Claire could run some tests on the blood. Later, in the lab, she will run tests on the other materials to find signs of the hare’s stress levels and other measures of health. How does their body condition change throughout the year? That may give some clues to why their reproductive rate changes throughout their cycle, too. 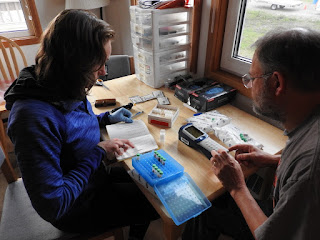 Claire is not the first to try to tease out mechanisms behind a roughly 10-year cycle of snowshoe hare population highs and lows, and she certainly won’t be the last. Miles may be just about ready for graduate school during the population peak after next. Maybe he’ll be the one setting traps and picking away at the problem. 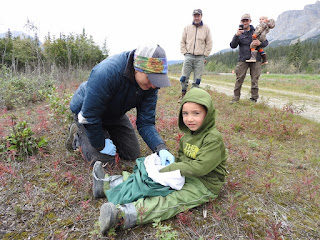 Emily was in Alaska for the summer! Follow the journey in this column, and see additional stories and photos on her blog: http://cablemuseum.org/connect/. 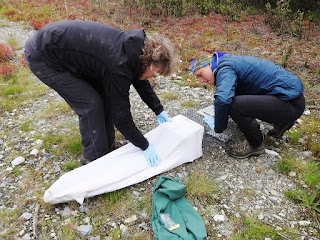 Donna DiFalco of the NPS helps Claire get a bunny out of the trap and into the pillowcase. Can you see the little bunny nose in the tip of the pillowcase? 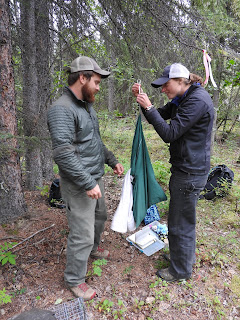 Here, Matt helps Claire weigh the hare. The light colored pillowcase is less scary for the hare to run into from the cage, but by putting in the dark pillowcase the researchers can help the scared animal calm down. The green case also has a buttonhole in one corner for attaching to the spring scale. They later subtract the weight of the fabric from the total weight. 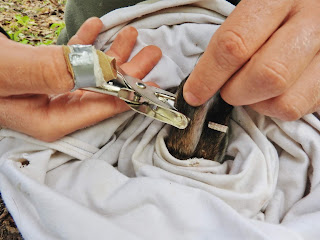 The ear tag device looks a lot like a paper hole punch. The hares get one tag in each ear with consecutive numbers. It is no more painful than a human getting their ears pierced. 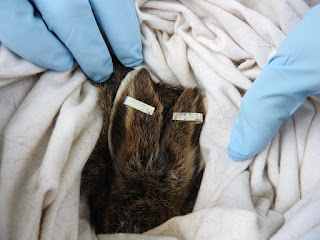 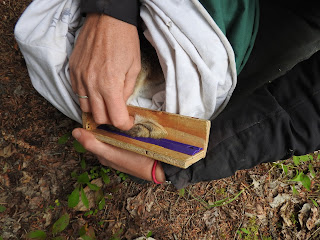 I was surprised at how much of their research equipment was homemade! This simple device has a section of a plastic ruler in the bottom to measure foot length. 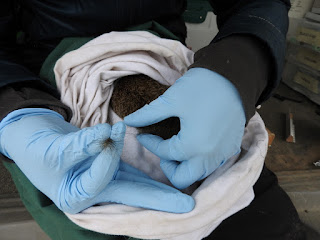 The longer guard hairs of the hares may carry important long-term markers of the animal's health. 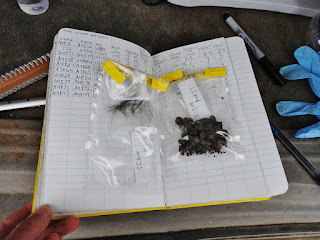 Hare, toenail, and scat samples were packaged in "whirlpacks" with the date and the hare's ear tag number. Everything was recorded in Claire's Rite-in-the-Rain notebook devoted entirely to this project. Scat samples will record a very recent record of the hare's health and stress levels. 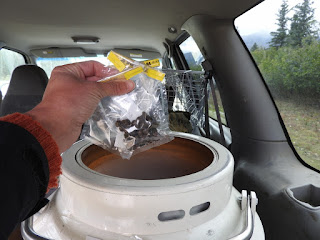 The biological samples were placed directly into this contraption, which uses liquid nitrogen in a foam liner to keep things cold. This preserves DNA and other information until it can be extracted. 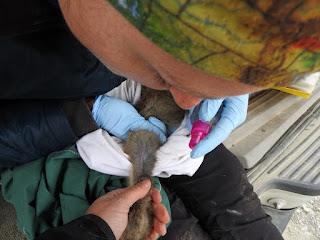 Claire has trained with veterinarians and is deft and compassionate when handling the hares. Here, she sprays alcohol onto a hare's hind leg to prepare for drawing blood. The liquid not only helps prevent infection, it also helps get the hair out of the way. 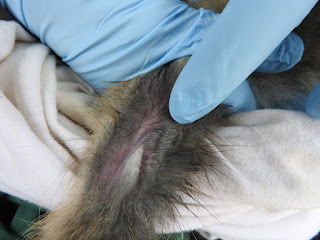 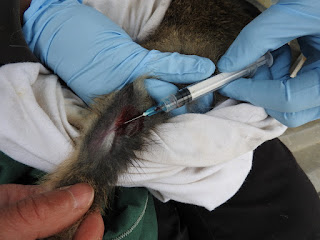 In goes the needle. The syringe contains a little bit of anti-coagulant to help keep the sample from clotting. That's important for processing. 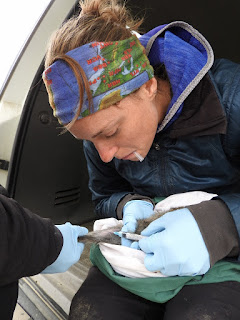 Donna holds the hare's leg to keep it from kicking, while Claire holds a needle cap at the ready. I helped transfer the blood from the syringe to the vial. It was important to safely discard the needle first--forcing the blood back out through the needle can damage cells and ruin data. 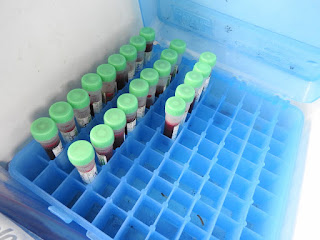 The blood samples were carefully labeled with date and ear tag number (like everything!) and stored in a cooler until Claire could process them at the bunkhouse.

What information will that blood reveal?
Stay tuned for Claire's master's thesis, due sometime in 2020!

And for fun, gifs of hares being released!