Sweating through the Birkie

This winter I think I’ve skied more kilometers than ever before. A combination of consistent snow conditions and high motivation levels for doing my best in the American Birkebeiner ski race led me out on the trail more often and for longer distances than usual.

My training sessions were mostly solo, although a couple pairs of vociferous ravens often kept me company at the North End Ski Trails. Scolding chickadees were ubiquitous and always improved my mood on a long climb. When a barred owl made an appearance, its flight was so silent that it seemed to make the whole woods go quiet. While I never saw a live, wild mammal, the tracks of wolves, foxes, fishers, squirrels, and voles still felt like good companions. Deer tracks scuffing up my classic tracks were less appreciated. Cold days brought the metallic smell of snow. Warm days wafted the smell of damp bark under my nose. Stark patterns of black and white, with purple shadows and deep green trees dominated my view.

After all that solo time, the scene at the start line of the Birkie was quite a shock. A rainbow-colored sea of people milled about on the snow. Music and the announcer’s voice blasted from the sound system. Cheering erupted at the sound of each shotgun start. The smell of porta potties came and went on the slight breeze. Skis and poles were everywhere. 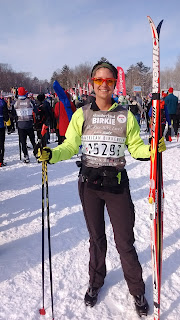 I took my place among the crowd of fifth-wave skiers, and as we flew into action at the sound of our start, the snow in the tracks felt silky smooth under my skis. In a fluid chain, we wound up, down, and around rolling hills through the woods. I hoped that other skiers were also appreciating the way the smooth drifts sparkled among dark stripes of trees in the bright sunshine. It was a beautiful morning.

It was also warming up quickly. I’d been able to force myself to start in light gloves despite the chill in the air at start time, but I hadn’t convinced myself to remove the magnetically attached sleeves from my jacket and thus start in just a vest. My fingers went from numb to happy in just the first kilometer, and then my body temperature just kept climbing.

I’m probably the only person who thinks about moose at a time like that, but several years ago I learned that those massive mammals feel heat stress anytime the temperature climbs above 20 degrees in the winter. Their hollow, insulating hairs and huge body mass (1,000 pounds easily), are well-adapted to keep them warm. While I can’t quite empathize with their bulk, I do understand how they easily overheat in a warm coat. Many of my friends have chuckled or shaken their heads at the minimal layers I wear skiing (just a base-layer and my thin jacket even below zero), and multiple moms have cringed at my reluctance to wear a warm hat.

Unlike moose, though, I can don or doff my warm winter layers pretty easily. Which is what I did when I reached a wide spot in the trail.

No amount of taking off layers could have kept me cool on the long climbs leading up to the High Point, though. Hot sun beating down didn’t help. I could feel sweat running down between my shoulder blades and beading up on my forehead.

All that sweat brought to mind a podcast I’d listened to recently—a TED Radio Hour on the theme of adaptations. Chris McDougall, author of the book Born to Run, was the guest, and he shared his theory that long-distance running, especially in heat, was our superpower. Our lack of body hair and our numerous sweat glands allow us to sweat better than any other mammal on Earth. “It was that ability to sweat which made every other great human achievement possible, because the fact that we could sweat allowed us to run super long distances on hot days,” claims McDougall.

Of all the theories about how humans evolved to be the way we are, I think this is one of my favorites. My aptitude for sweating connects me to the success of humans in evolutionary history. Adaptations don’t just include physical traits, though, and cross-country skis are a great example of humans’ ability to make tools and adapt to a wide variety of habitats. The Birkie combines these two adaptations seamlessly as thousands of people “run” on unique tools, for a long distance, over snow.

After crossing the International Bridge, I smiled all the way up Main Street in Hayward to the finish line. A volunteer was waiting there to put a finisher’s medal around my neck. We both grinned.

A couple days later, after it no longer hurt to climb stairs, I headed back out to my beloved trails. The ground flew by beneath my skis and a light breeze kept me cool. Chickadees sang. What a joy it is, to use my adaptations. 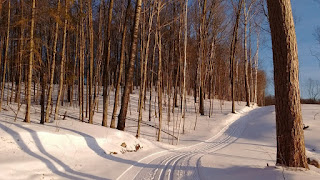 Special Note: Columnist Emily Stone is publishing a second book of her Natural Connections articles as a fundraiser for youth programming at the Cable Natural History Museum. Since community members are often the inspiration for her articles, the Museum is conducting an art project for kids and adults to illustrate each chapter with a black-and-white line drawing. Find the details and entry form at http://cablemuseum.org/connect/.
Posted by Emily M. Stone at 5:00 AM