Fun Guys in the Fen

None of us had rubber boots handy, so when we came to the log bridge across the moat we took off our shoes and went barefoot. I enjoyed the firm roughness of the decorticated log on my soles, and then the cool squish of the sphagnum moss in the floating mat as I stepped into the magical world of the fen. 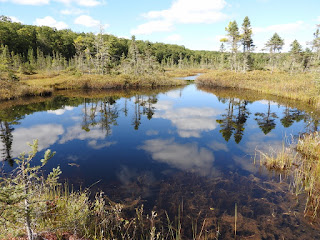 I love bringing appreciative people into the Namekagon Fen, and my companions on this day were wonderful. Peter Kennedy is an associate professor at the University of Minnesota, and had just given a talk called “Knee deep in peatland fungi: Mycorrhizal community diversity and composition in fens and bogs of the Northwoods.” He’d already been to one nearby bog as part of the North American Mycological Association’s annual foray, held this year at Lakewoods Resort near Cable, but when I offered to show him a giant fen as well, his eyes lit up.

As I gave some final instructions to my volunteers at the information desk, and prepared to play hooky from the foray for a couple hours, Michael Beug walked up with his camera. Michael is a professor at Evergreen State College in Olympia, Washington. Back in the day, he teamed with the college’s ornithologist to study the impact of DDT on calcium transport in birds, and this work played a major role in getting the pesticide banned. He and Peter met during Peter’s undergraduate studies. They started chatting, and soon Michael went off to grab his camera so he could join us.

So there I was, ankle deep in cold, wet sphagnum with two PhDs who were talking a mile a minute about shared experiences and recent news, with occasional breaks to point out neat things in the fen.

Waving his hand over a patch of dead sphagnum moss, which looked bleached and scraggly compared to the velvety-red living moss beside it, Michael informed me that it was killed by a fungus. He poked around for a bit, hoping to find the delicate, pink mini-mushroom forms of Roseodiscus sp. No luck. 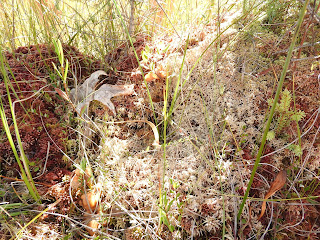 I offered up the impressive fact that my previous explorations had revealed this fen to be over 40 feet deep, with the bottom still out of reach of our current tools. We also found pitcher plant leaves, a tiny frog, a few late-blooming bog laurel flowers, a couple of red-orange waxy cap mushrooms, and a tiny white pine seedling growing out of a sphagnum hummock. 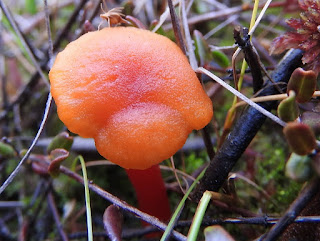 Without hesitation, Peter dove elbow-deep in the moss, following the white pine’s stem down to its roots, and out to the fine roots to look for mycelia. Tree roots aren’t actually that great at directly acquiring the water and nutrients they need. Most, but not all, plants have instead cultivated a symbiotic relationship with fungi in the soil. A web of thread-like fungal mycelia connects with the tree’s roots to bring it water, minerals, nitrogen, phosphorus, and even protection from pathogens. In return, the tree feeds the fungi sugars it produces through photosynthesis. As Peter described in his talk, this mycorrhizal (fungus-root) relationship is important in bogs and fens because they are especially challenging, low-nutrient environments. 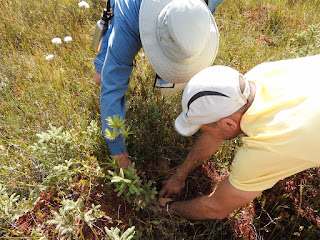 We replanted the tree (although lack of mycelia suggested it didn’t have much of a chance), and wandered some more.

We were almost back at the bridge when things got even better. I pointed out a little black spruce grove where orchids bloomed in July. We wandered in. Michael plunged his hand into the sphagnum, and brought up a handful of wiry black spruce roots—their finest tips neatly capped by a white sheath of fungal mycelia. These trees were thriving with the help of mycorrhizal fungi.

Then the guys spotted some big brown mushrooms. “Hebelomas,” Michael called them. “They’re boring mushrooms nobody looks at,” Michael told me, but his friend Henry Beker from the University of London just finished the monograph on the European Hebelomas, so Michael wanted to help him document the ones here, too. They may be mycorrhizal, which makes them interesting to me.

As Michael was stooped over his tripod getting the drab, brown mushrooms in focus, Peter happened to see something else between his feet. I couldn’t even begin to understand what they were exclaiming over until Peter brought up a small clump of sphagnum moss for me to see closer. Clusters of miniature mushrooms bejeweled the mess, and their white bodies glowed in the sunlight like frosted glass ornaments. 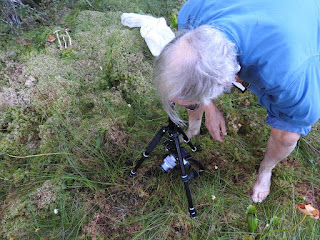 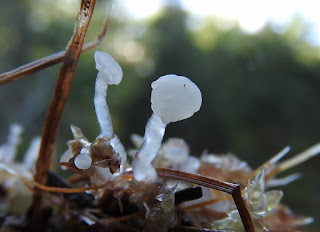 Neocudoniella radicella: this little mushroom is found in sphagnum bogs where black spruce rootlets turn up out of the soggy mat to get air. It was a “lifer” for Michael, a mushroom he’d never seen before. “The fact that I knew it existed in a place that is incredibly beautiful and magical made it an object of desire,” he later told me.

A little handful of the gems went into Peter’s collecting basket, and eventually made its way through the vouchering process in the basement of Lakewoods. One last hurrah came that evening during announcements. Our tiny gems had been chosen by the mycologists as the “find of the day”!

That was nice, of course, but there was nowhere to write on the voucher form that the fen where these mushrooms grew was filled with bare toes squishing the sphagnum, joy bubbling up in the sunshine, old friends reconnecting their bonds, and new friends sharing an adventure. The fen is filled with treasure! 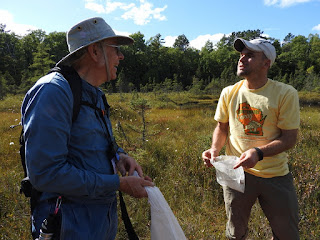