A Swarm of Wiggling Swimmers

Even through closed windows I could hear the rough quacks of wood frogs and the clear chimes of spring peepers rising from the wetland. A loon’s haunting wail echoed across the lake. Stars twinkled. No mosquitoes buzzed. And the temperature still hovered above 50 degrees. Perfect nights like this only come twice a year: in spring and in fall.

Even though I had planned to head upstairs for bed, I paused at the front door, slid on my muck boots, grabbed a flashlight, and slipped out into the night.

The air felt cool and fresh as I tromped down to the shore. No breeze stirred the trees. After I stepped out onto the wet sand at the water’s edge I stilled my body and opened my senses. Frog calls came in stereo from multiple wetlands around the lake. Actual ducks joined in the wood frogs’ quacking, and somewhere out on the liquid ebony, geese honked sporadically like kids settling in at a sleepover.

As my eyes adjusted, the number of visible stars made the sky look foggy, although two pesky yard lights from across the bay really infringed on my night vision. After a few deep breaths, I switched on the flashlight and turned to go. The light caught on layers of brown leaves, just slightly suspended above the sand, gently rocking back and forth in the ripples caused by my rubber boots. And something zipped across the flashlight’s halo.

Crouching down, I discovered a swarm of tiny swimmers, each less than half an inch long. Some wiggled through the water column, some zipped across the sand and leaves, and some froze in the spotlight. Enchanted, I watched carefully and tried to identify these little benthic macroinvertebrates. (Benthic = bottom dwelling, macro = visible without a microscope, invertebrates = no spine.) The swimming ones were just bundles of wiggling appendages. Then I finally focused in on one of the critters resting on the sand. Three thin tails spread out from the tip of its abdomen, and I could imagine them drawing a stylized letter M. M is for mayfly. 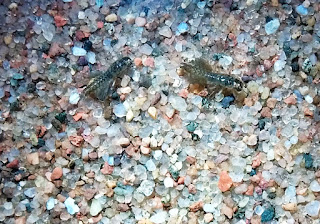 This flock of little water wigglers will one day shed their exoskeletons and spend from a few frenzied hours to a few glorious days as winged adults. Mayflies belong to the order Ephemeroptera, which is named from the Greek words meaning “short-lived” and “wing.” And while it’s true that mayflies are short-lived once they have wings, their immature, flightless, aquatic nymphs can actually live for several years.

That nymph stage is what swam through my light beam. Two antennae projected off one end. Three thread-like tails arched gracefully off the other. In between were three pairs of legs on the thorax, and two fringes of undulating gills, which were arranged in seven pairs along the abdomen.

After hatching, mayfly nymphs may molt through 30 instars as they grow. Chewing mouthparts help them feed on algae and dead stuff. A few species predate on other, smaller, invertebrates as well. Some species of mayfly nymphs burrow into the lake bottom and billow their gills to stir up sediment. Not only does this allow them to filter feed on “periphyton,” (which is basically that scum of both living and dead things that coats objects in a lake), it also stirs up nutrients that phytoplankton and other critters can use.

Their feeding habits make mayfly nymphs fairly sensitive to pollution. Acidification, sewage, pesticides, and industrial effluent are particularly harmful, and their impact on mayflies can throw the whole food chain out of whack. Algae might take over like weeds, and their fish predators may starve or just concentrate the pollution in their own bodies. On the flip side, the presence of mayfly nymphs can tell us that our water is clean without a lot of expensive tests.

While mayflies may live for years in their nymph stage, their adult stage is what brings them fame. In several species, the emergence of adults is synchronized, in order to overwhelm all of their predators. The clouds—and drifts—of mayflies are sometimes visible on weather radar and can cause slippery roads. Anglers imitate them carefully.

Mayflies are the only insects that have a winged, terrestrial, but not sexually mature stage. When a nymph reaches its final instar, it sheds it exoskeleton one more time. What emerges is a dull-colored winged creature who (usually) cannot yet mate. These subimago are both poor flyers and excellent fish food. After a few minutes to a few days, the subimago sheds its exoskeleton and becomes a brightly colored, fully functional imago (adult). 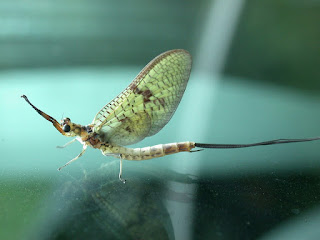 As adults, mayflies resemble some of the very first flying insects. The long, thread-like tails that I used to identify the nymphs stick around in the adult form. Their clear, vein-riddled wings do not fold flat over their abdomen and are held upright while at rest. Mating is quick, egg-laying prolific, and death follows closely.

I wonder how much longer this swarm of tiny swimmers in my lake needs to grow? Later this summer I’ll probably paddle through a scum of their shed exoskeletons and ephemeral, winged bodies. For now, I’ll just enjoy watching the wigglers on an otherwise bug-free night.

Special Note: Emily's book, Natural Connections: Exploring Northwoods Nature through Science and Your Senses is here! Order your copy at http://cablemuseum.org/natural-connections-book/.  Listen to the podcast at www.cablemusum.org!

For 50 years, the Cable Natural History Museum has served to connect you to the Northwoods. Come visit us in Cable, WI! Our new exhibit: "Better Together--Celebrating a Natural Community" will open on May 2!