This morning I took my camera out looking for an adventure. The otters’ early morning tracks went run-run-sliiiiiide along the lakeshore. A pair of fox tracks trotted merrily down the driveway on a date (complete with double scent marks!). Shards of snow clung to emerald moss as it clambered a maple’s craggy bark. The morning was beautiful, but still nothing inspired me. So I buckled down at my computer to fill in spreadsheets and make graphs. 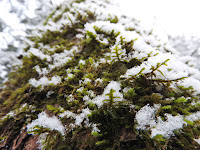 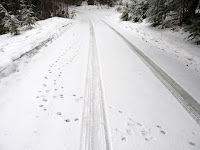 The data I organized are actually pretty interesting. In December, sixth graders at Drummond dissected goldenrod galls and recorded their contents and diameter. Most of the time they found the plump goldenrod gall fly larva who created the gall. Occasionally they found a wasp or beetle larva that parasitized the gall larvae. I love telling the story (you can read about it in my book), and they love discovering it.

Suddenly, in the middle of copying my final graph into the slideshow for class, I got up with a half-formed thought and wandered into the kitchen. Digging to the back of the freezer I pulled out a folded zip-top bag with a dozen or so brown galls. Here were the leftovers from that December class. These weren’t smooth and round like most of the galls we dissected, though. They were oblong, spindle-shaped, with some smooth ridges like musclewood bark. 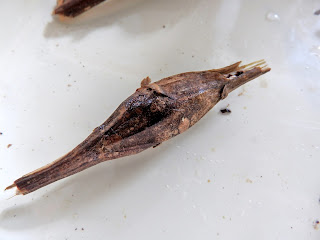 Unthinking, I’d handed one out in class with the rest of the galls, and a girl opened it up. Inside the oddly spacious cavity was a large, crispy, dark-brown larva. This wasn’t the same insect we’d been studying! I’d always meant to research these elliptical galls, but hadn’t gotten around to it. So I packed the gall and the larva into a petri dish and stuck the rest of the odd galls back into the freezer. Until today.

Excited now, I took out my trusty dissecting tools: a paper plate and serrated butter knife. One by one I opened the elliptical galls. Empty. Empty. Empty. They were all empty, with large cavities. A white film coated the inner chamber. Did a fungus kill them? Poking deeper, I noticed a small hole near the top of one gall. An exit tunnel! 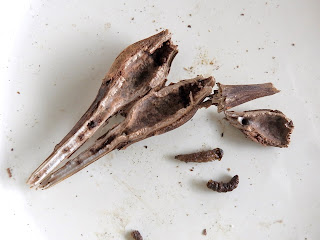 Finally, the last and largest gall revealed another crispy larva. Under the dissecting scope, I noticed many small holes in the dried exoskeleton. Weird. Now I was hungry for information. Using Google images, I quickly matched the image of the gall to a name: goldenrod gall moth—Gnorimoschema gallaesolidaginis. This frumpy moth has a one centimeter long body and two centimeter wingspan. The forewings are dark, and the hind wings are pale and fringed. It’s not much to look at, but drama unfolds when you did deeper. In 1963, William E. Miller of Ohio State University wrote a classic natural history article titled: “The Goldenrod Gall Moth Gnorimoschema gallaesolidaginis (Riley) and its parasites in Ohio.” I’ve summarized his information below.


The goldenrod gall fly larva that we usually study spends its winter frozen inside the gall.

This gall moth takes a different approach, and it explains why I found no live larvae in the galls. The adult moth lays its eggs on the dying lower leaves of goldenrod plants in late summer and fall. The eggs overwinter there. The adult dies. Once a larva hatches in spring, it must seek out a newly sprouted goldenrod nearby. The larva eats its way in through the terminal bud and into the pith of the stem. Just a few inches below the terminus, it sets up shop. Growth hormone-like chemicals in its saliva trigger the plant to grow the elliptical gall.

After feeding inside the gall all summer, the larva chews itself an exit hole, leaving just the thin outer skin of the plant intact. Then the larva fashions itself a plug for the hole out of sawdust and silk. Brilliantly, the exit hole is wider on the outside and tapers toward the inside. The plug fits just like your bathtub’s stopper, and is easy for the moth to eventually pop out, but hard for an invader to push in.

Next, the larva lines it cavity with silk. In doing so, it both seals the chamber and creates a sort of guide to help the adult moth find its way out. The white film I attributed to killer fungi may actually have been helpful silk! Once both the escape hatch and runway are in place, (sometime in July or August) the larva pupates. The cocoon stage lasts four to six weeks, and then the moth emerges in early fall, pushes open the plug, finds a mate, and continues the cycle.

This ideal scenario rarely happens. About half of the larvae succumb to parasites, mostly parasitic wasps. While reading Miller’s graphic description of the various parasites, the meaning of the dried larval skeleton riddles with holes became clear. “Copidosoma g gelechias is a polyembryonic internal parasite of the larva,” wrote Miller. What does that mean? This tiny wasp lays a single egg inside the moth egg. The moth larva hatches in spring, and it grows normally until the wasp egg clones itself and produces lots of wasp eggs. The wasp eggs hatch and are “set free in the host’s body cavity.” The parasites eat the moth larva from the inside out, leaving only the chitinous hard parts, and conveniently waiting to finish it off until after the moth larva excavates the exit hole. Some wasp larvae grow bigger than others, and they attack the larvae of any other wasp that might also have parasitized the moth. In the end, the wasps pupate and emerge, leaving behind a hollow shell riddled with holes—a hollow shell which now sits on my desk. 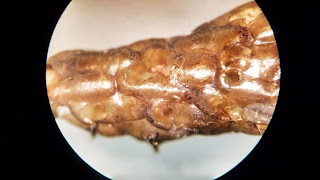 Driving home past ditches full of dried goldenrod stems, I couldn’t stop thinking about this amazing story. How many more stories are hiding there, just in that ditch?