Two perfect tracks paralleled a sinuous curve of the frozen Montreal River. Back at the ABR ski trails near Ironwood, MI, I was enjoying a leisurely classic ski while my friends all zipped around the wider trails on their skate skis. The morning was perfect: blue skies, bright sun, and temperatures rising quickly out of the teens. 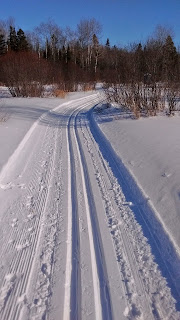 Here and there, a few animal tracks stitched their way across the trail. They were coyote, maybe, or red fox. Then a bigger depression beside the trail caught my eye. Was that a sitzmark from a clumsy skier? Not quite. Like an upside down exclamation point, a yard-long, foot-wide trough ended at a small bridge of unbroken snow. Capping it off was a chicken-sized snow angel. 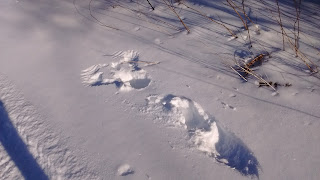 Naturally, I slid to a halt and gingerly backed up in the tracks to get a better look. I also pulled out my phone and turned on the camera. (I’d rather use a good camera, but I prefer to carry my phone!) This was the best example of a ruffed grouse’s snow roost that I’d ever seen!

Grouse are exquisitely adapted to winter. They grow their own snowshoes in the form of fingernail-like projections on their sides of their toes. Extra feathers on their beak and legs provide insulation where it’s needed. And when their fluffy body feathers aren’t enough, grouse use the snow like it’s a cozy down comforter.

Once there are 10 or more inches of snow on the ground, grouse will dive or burrow into the fluff and spend the night in an air-filled tunnel. Temperatures under the insulating snowpack often reach a pleasant 32 degrees F. No matter how cold it gets, the snow roost rarely drops below 20 degrees F. Research has shown that grouse don’t need to really speed up their metabolism to keep warm until the temps dip below 25, so the snow roost provides them with significant energy savings.

I could see the grouse’s sleeping nook begin where the trough ended. Skiing forward and looking back into the tunnel, I spotted a pile of about a dozen macaroni-shaped scats in the shadows. Yes, I took a picture of the scats! They represent another purpose for the snow roost. In winter, grouse subsist on tree buds and catkins. Trembling aspen buds seems to be the most nutritious—and grouse prefer them—but the buds and catkins of bigtooth aspen, birch, alder, willow, hazel, and ironwood also provide sugar and protein. 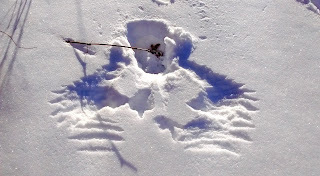 There are two main problems with eating tree buds, though. First, they take a lot work to digest. To address this problem, grouse have a muscular gizzard with added grit that grinds up the woody material. From there, the softer materials enter the caeca. These two extra-long pouches contain specialized bacteria that can digest cellulose and absorb more nutrients before the food exits their digestive system. Waste from the caeca ends up as a dark, shapeless plop, while the woody materials become cylinders of molded sawdust like those I found in the roost.

The second problem is that eating buds in the leafless treetops exposes you to the hungry eyes of predators. As many of you know, grouse meat is quite tasty. A grouse’s solution is to eat an entire day or night’s worth of food in about 20 minutes. They store all that food in their crop—an expandable sack at the base of their neck—and then find a safe spot to digest their meal. A snow roost shields grouse from the piercing eyesight of hawks and owls, as well as the sharp noses of foxes, coyotes, bobcats and fishers.

With only my lowly human senses and tendency to daydream, I’m sure the snow roost would have completely concealed its resident from me. If I’d skied by earlier and been the one to flush out this grouse, I would have been completely astonished by the flying snow and flapping wings. 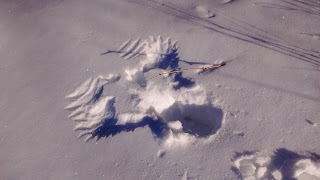 Snow roosts aren’t just an interesting tracking story to read in the snow, though. They are truly a necessity for these birds’ ability to survive the winter. Thin or crusty snow—unsuitable for roosts—makes their brown feathers more visible than no snow at all. While the deep freeze of last week may have challenged our thickest mittens, it also provided perfect conditions for grouse to hide. The balmy temperatures of this week may feel pleasant on bare skin, but they are wrecking the snow for grouse and skiers alike. A 2008 study in The Wilson Journal of Ornithology found that about 17% of the variation in grouse populations is controlled by snow conditions of the previous winter. Deep, fluffy snow equals more grouse. Crusty snow results in a higher mortality rate.

As I skied on (and on, and on…for a total of 50k of Birkie training in two days!) the tracks of weasels, hares, mice, wolves, deer, and squirrels crisscrossed the groomed trails. Just like the grouse—and the dozens of other skiers out on the trails—they have adapted to winter. If you know how to take advantage of it, good snow can be a real boost to your survival.

Special Note: Emily's book, Natural Connections: Exploring Northwoods Nature through Science and Your Senses is here! Order your copy at http://cablemuseum.org/natural-connections-book/. Listen to the podcast at www.cablemusum.org!

For 50 years, the Cable Natural History Museum has served to connect you to the Northwoods. Come visit us in Cable, WI! Our new phenology exhibit: "Nature's Calendar: Signs of the Seasons" is open through March 11.
Posted by Emily M. Stone at 6:00 AM